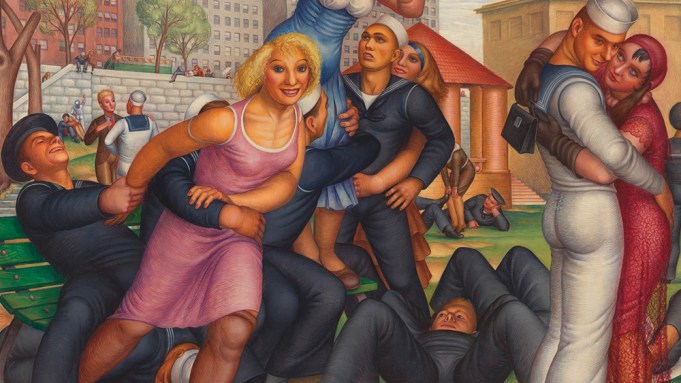 This spring New York audiences were indulged with two provocatively revealing exhibitions. Visitors to David Zwirner’s Nineteenth Street gallery and the Museum of Modern Art could explore a midcentury demimonde of queer artists and bohemian authors, witnessing the fertile seedlings of a distinct gay sensibility at least a full generation ahead of “out” artists of the post-Stonewall era.

Both shows orbited Lincoln Kirstein, an influential arts patron and founder of the New York City Ballet. Kirstein was fond of saying that he had “a live eye,” and with his catholic tastes he expanded MoMA’s mission by establishing a dance archive and encouraging the institution to collect artists unconnected to the Cubism and abstraction favored by MoMA director Alfred Barr. The exhibition at the museum, “Lincoln Kirstein’s Modern,” does not bring Kirstein’s vision into clarifying focus; rather, it looks artistically fractured. Passing from one gallery to the next, we encounter Walker Evans’s rigid photography, Elie Nadelman’s folk-style sculpture, Ben Shahn’s social realism, costume designs for ballets, and works by some barely known Latin American realist painters. Kirstein was infatuated with painter Paul Cadmus, and attempted to resolve his unrequited affection when he married the artist’s ravishingly beautiful sister Fidelma in 1941. But though his queer sensibility still resists easy identification, both the MoMA show and the one at Zwirner suggest that the Magic Realism seen in the work of Cadmus, George Tooker, Jared French, and Pavel Tchelitchew, all of whom Kirstein included in his 1943 MoMA exhibition “Americans 1943: Realists and Magic Realists,” was a bona fide expressive style, queer in its genesis and transformative for American art.

“The Young and Evil,” as the Zwirner show was titled, was tighter than the seventy-artist MoMA presentation, featuring work by twenty-five figures but focusing on three painters who were, at various times, each other’s lovers: Cadmus, French, and Tooker. These sophisticated, bookish oddballs created the American equivalent of a pre-Raphaelite fraternity, doing what they could to reincarnate Renaissance values. Their use of the egg tempera technique of Quattrocento panel painting confirms their worldview. The virtuosic images demonstrate a process of narrative figuration blended with precisionist technique; one is tempted to compare it to Kirstein’s loftiest achievement: transplanting the disciplined style of Russian ballet to the American stage.

Cadmus and French toured Europe together between 1931 and 1933, and a highlight of their travels was seeing Luca Signorelli’s fresco cycle for the Orvieto Cathedral in Italy. Cadmus’s rollicking Shore Leave (1933) is a balletic brawl of interlocking groins, squishy breasts, and tubular extremities. The buttocks of the sailor at the right of the canvas—gloriously accentuated with skintight, laced-up Navy pants—are directly quoted from the flagellating demons in Signorelli’s frescoes. Cadmus’s Herrin Massacre (1940), which Life magazine commissioned from the artist but never published, is a ghastly image depicting seven of the twenty-three deaths that occurred in the 1922 United Mineworkers conflict in southern Illinois. The artist’s use of a high horizon line, snarling Boschian caricature, and iconographic clues (like a bloodied sacrificial lamb on a tombstone) were intentional references to fifteenth-century Flemish prototypes. The grotesque carnality here drew ire from critics; in a 1943 review of a Cadmus show, Doris Brian decried the “cheapness of technique bound up with cheapness of concept. Pornography has a place in art, but even for good pornographers there are some governing factors.”

French’s painting Murder (1942) is possibly an eerie eulogy to his friend George Tichenor (a lover of George Platt Lynes, whose photographs are also included in “The Young and Evil”). A volunteer ambulance driver, “Tich” was killed in a Luftwaffe strafing attack at El Alamein in 1942. French stages the entombment of this martyr amid the cliffs of the Egyptian desert. The depictions of statuesque, muscular men standing around the body seem transferred from an ancient Greek vase.

Tooker’s Fountain (1950) is the zenith of his mature style. Shirtless men—as stiff and finely featured as figures in a Piero della Francesca painting—encircle a fountain, reaching tentatively toward its iridescent spray. While a heterosexual male viewer might admire their healthy athleticism, a gay one might see their glistening physiques as enticing beefcake. Elsewhere, such desires were more obviously transmitted. Cadmus’s Finistere (ca. 1951) fixes the viewer’s attention on the insertion of a pointy bicycle seat into the derriere of a young man. The figure turns his head toward a fetching potential partner, who pulls down his tight swimsuit.

For the most part, homoerotic desire was sublimated and coded. Explicit works like Cadmus’s sketches of gay sex acts—which were displayed in vitrines at Zwirner, on loan from the collection of the Kinsey Institute for Research in Sex, Gender, and Reproduction in Bloomington, Indiana—were made for private consumption. Rather than risk societal condemnation by coming out of the closet, this tiny coterie of painters found refuge in the grand tradition of academic painting.

“Gay . . . was a code word,” notes George Chauncey in his landmark book Gay New York (1994). “Gay men could use it to identify themselves to other gays without revealing their identity to those not in the wise.” Perhaps Magic Realist painting might be seen as an equivalent. “Magic Realists,” Kirstein explained in the essay for his 1943 exhibition, “try to convince us that extraordinary things are possible simply by painting them as if they existed.” And so these painters created scenes of gay desire on the verge of fulfillment.

Kirstein’s curatorial activity at MoMA was in many ways a contrarian redirection of founder Alfred Barr’s canonical 1938 flow chart of styles spanning from Post-Impressionism to abstraction. In Barr’s telling, Surrealism failed to establish a beachhead in America. But “Lincoln Kirstein’s Modern” says otherwise. It includes Tooker’s Sleepers, II (1959), in which Surrealist fantasy tilts toward American objectivism. Where Magritte painted billowing clouds, Tooker depicted textured, undulating blankets, swathing androgynous reclining figures who look upward, transfixed. Surrealists were influenced in part by Freud’s theories of repressed desire channeled into object fetishes. Magritte, for instance, made a drawing in 1946 of himself as a Lilliputian spelunking in his wife Georgette’s gargantuan vaginal cave. The Yankee equivalent was visibly phallocentric and queer.

The big sensation of the MoMA show is the comeback of Pavel Tchelitchew’s Hide-and-Seek (1940–42). For decades it was one of the museum’s most popular paintings. But the canvas was purged from the permanent collection galleries in 1972 and placed in storage as part of the renewed emphasis on abstraction—a bias that lingers today, when popular works like Andrew Wyeth’s Christina’s World (1948) and Edward Hopper’s House by the Railroad (1925) are marginalized by their placement beside, respectively, an escalator and a restroom. With its quasi-scientific, proto-psychedelic hallucinations of children, trees, and fetal circulatory systems, Tchelitchew’s masterpiece was shunned for belonging to a category of hackneyed, hopelessly retrograde narrative paintings. The queer signifiers may also have been factors in this decision. Hide-and-Seek is rumored to feature a disguised representation of the penis of New York City Ballet dancer Nicholas Magallanes. Furthermore, gender in the painting is ambiguous and scrambled. The central figure has muscular legs and big feet as well as feminine, waist-length hair. Tchelitchew was likely quoting Michelangelo, who depicted hermaphrodites growing out of trees in his chalk drawing Fall of Phaeton (1533).

Cadmus would have marveled at all this unexpected, belated attention to his and his friends’ work. In 1975, when I was a young graduate student, I visited Cadmus at his studio cottage on Kirstein’s sprawling Connecticut estate. The artist provided plainspoken explanations of his playful and nimble use of Surrealist tropes as we flipped through an album of high-quality, black-and-white photographs of his entire oeuvre of 120 paintings (he used to say that overproduction is the characteristic vice of most modern painters). Tree branches morph into erections, ancient Alexandria’s Pharos doubles as a towering phallus, baseball bats are stiff wooden cocks. Cadmus whispered the essence of his method to me across the kitchen table: “W.H. Auden believed that homosexuality is the search for the maleness of the male.”

Looking back, one can see a wedge between the poetically genteel queers of Cadmus’s time and the outspoken gay militants of subsequent generations. In his article “Cruising with Paul Cadmus,” in the November 1992 issue of this magazine, art historian Jonathan Weinberg accused the artist’s gallery of “trying to lock Cadmus . . . back inside the closet.” Cadmus responded in a letter to the editor, saying that “gayness is not the raison d’etre of my work.” Iconographic coding and allusions to the grand tradition of painting, we can suppose, were. Through the sightlines offered by the shows at Zwirner and MoMA, we can appreciate the origins of Gay Gotham’s culture, as well as the disparate tactics of yesteryear’s hiding and today’s seeking.