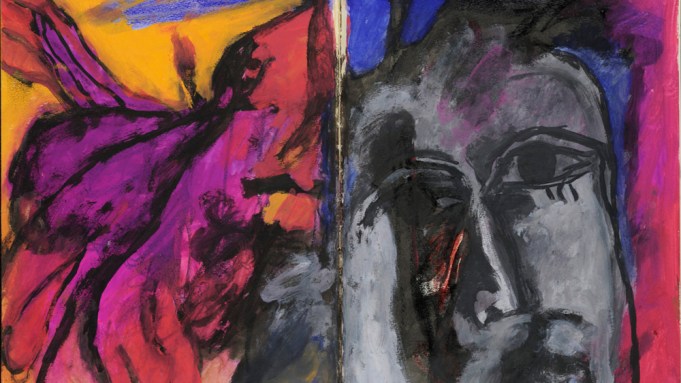 In January 1991, armed forces led by the United States commenced combat against Iraq. Including a military build-up that started the prior year in response to Iraq’s invasion of Kuwait, the Gulf War lasted just shy of seven months. In “Theater of Operations: The Gulf Wars 1991–2011,” at MoMA PS1 through March 1, the conflict’s shadow extends over two decades of artistic production. The show is big, filling three floors with over three hundred works by some eighty artists and collectives, many of them Iraqi and Kuwaiti. Arranged in loosely chronological galleries, work in the exhibition grapples with the Gulf War, its aftermath, and the Iraq War (2003–11), foregrounding indelible images of protest and torture associated with it.

Journalists like to say they’re writing the first draft of history. Less attention is given to artists’ active interventions in the same project. A tension between art and journalism runs through “Theater of Operations,” with a number of artists directly critiquing the media for its warmongering. As curators Peter Eleey and Ruba Katrib argue in their catalogue essays, the Gulf War spawned many aspects of our current media climate. Advances in satellite technology allowed nascent twenty-four-hour cable news networks to supplement morning and evening digests with constant updates. For the first time, civilians could get news about the war in real time, ushering in a fetish for immediacy—or at least the sensation of immediacy—that pervades the show. Thomas Hirschhorn’s cardboard sculpture Necklace CNN (2002), an oversize network logo on a giant chain, all wrapped in gold foil, hangs near the entrance to PS1, greeting visitors as a kind of station ID for exhibition. There are seventeen hours of video in “Theater of Operations,” including Michael Auder’s Gulf War TV War (1991/2017) for which the artist filmed his television as he channel surfed, flipping between soap operas, commercials, and jingoistic newsreels. The piece effectively captures the numbing tedium of endless, mediated war. But the exhibition also takes pains to present work by Iraqi and Kuwaiti artists like Thuraya Al-Baqsami, who directly experienced the wars and often registered their reactions using analog mediums like paintings and illustrated books.

The global scope of “Theater of Operations” complicates our sense of whose interpretations of the wars can be deemed the most legitimate and authoritative. The curators highlight the artists and journalists who documented the conflict while cutting through the noise typical of broadcast television. Susan Crile was among the Western artists who rushed to region to document the aftermath of the war firsthand. Her Field of Fire (1991) depicts oil wells in Kuwait that had been set on fire by retreating Iraqis. Crile saw the apocalyptic landscape in July 1991 on a visit facilitated by Bechtel, an American company hired to extinguish the fires. One gallery includes work by Susan Meiselas, who in 1991 and 1992 took photographs of mass graves associated with Saddam Hussein’s genocide of some 100,000 Kurds during the Iran–Iraq War (1980–88). Most affecting of all is Dia Al-Azzawi’s Victim’s Portrait (1991), a painted portrait hung alongside a small newspaper clipping that features a photograph of a horrifically disfigured burn victim in Iraq. Though American newspapers refused to publish the photo, it became, like the images of burning monks in Vietnam, an iconic representation of the Gulf War around the world. Al-Azzawi’s painting is an attempt to restore both features and dignity to the man.

The black-and-white photo is one of few graphic depictions of violence in the show, along with Hirschhorn’s Touching Reality (2012), in which a white person’s hand blithely swipes past gruesome digital images of corpses and carnage, occasionally zooming in (callously, almost pruriently) on particularly grisly areas. No less shockingly violent is a painting by Fernando Botero, Abu Ghraib 52 (2005), which features dogs attacking a blindfolded prisoner, the leash on one held by another white person’s hand, this time gloved. Although the figures are painted in Botero’s characteristic roundboy style, the contrast to his usual lighthearted fare amplifies the inhumanity of torture. Even Richard Serra, an artist whose minimal formal vocabulary often suggests a highly constrained emotional range, was sufficiently moved by reports of torture to abandon his abstract style for Stop Bush (2004), a figurative drawing of the infamous hooded detainee at Abu Ghraib.

The brutality-of-war beat, however, is largely outsourced to Iraqi and Kuwaiti artists working in a modernist idiom. I was particularly taken by Nuha Al-Radi’s prints and puppet-like sculptures made from war debris, as well as Khalifa Qattan’s wonderfully weird paintings, one of which—Kuwait is Burning (1971)— eerily prefigures the fires that would rage two decades later. There’s also an embarrassment of artists’ books from Iraq called dafatir, after the Arabic word for “notebooks.” Wall text explains that this medium became popular after sanctions made paint and canvas scarce. There are so many of the books that one longs for a more discriminating, edited selection.

HAVING LEARNED their lesson from the consequences of granting press access in Vietnam, military authorities imposed a tight pool system of journalists covering the Gulf War, severely restricting their access to the frontlines. As a result, most of the video footage of the war came from the Department of Defense. It was recorded using night vision, often by cameras attached to missiles, creating a bloodless, futuristic perspective that led the conflict to be dubbed the video game war. The only game on view here, however, is Cory Arcangel’s Bomb Iraq (2005), a simple stop-motion representation of a missile’s final approach to its target, represented by a crude map of Iraq. (Hung on a nearby wall, in devastating juxtaposition, is a painting left unfinished by Layla Al-Attar when she was killed by an American bomb in 1993. There is some speculation that the attack was not a misfire, but retaliation for her mosaic of George H.W. Bush at a Baghdad hotel popular with foreigners, inlaid in the floor so that visitors would have to step on his face to enter.) The jerky motion of Arcangel’s game—which, according to the wall text, the artist found on an old Macintosh computer in a thrift store—makes playing it feel like reading an illustrated e-book, and so the work straddles an interesting divide in “Theater of Operations” between page and screen. It’s said of Arab literature that Cairo writes, Beirut publishes, and Baghdad reads, and this exhibition seems to offer a paraphrase to describe artistic responses to the Gulf wars: Iraq makes richly expressive books and paintings, the West watches on TV, then makes works about that mediation. Or: Western artists trade in facts, while Iraqis and Kuwaitis trade in feelings.

While broadly applicable to some of the work in “Theater of Operations,” this dichotomy collapses in the work of younger diasporic artists like Monira Al Qadiri or Alia Farid who might have an impressionistic childhood recollection of the war that they have reconstructed and filtered through the conventions of contemporary art. Al Qadiri’s Behind the Sun (2013) features found footage of a Kuwaiti oil-well fire. The dramatic imagery associated with the environmental catastrophe—dark skies and huge trumpets of fire topped with voluptuous plumes of smoke—proved to be the war’s most enduring visual legacy. Al Qadiri’s work is projected in PS1’s basement gallery and can be viewed from a first-floor balcony. The distance between the audience and the event belies the origins of the footage, which was taken by a local resident who jumped in his car and sped off towards the conflagrations to capture them. Its vantage point is closer, more intimate than the usual network footage.

Still, the best works in “Theater of Operation” don’t address the war directly, so much as have it in the background, like keeping the TV on for the noise. Addressing the war indirectly also avoids the danger of sensationalizing violence or aestheticizing “resistance.” Hiwa K’s The Bell Project (2007–15), a huge bell cast from melted-down munitions, is displayed adjacent to two videos that document the years of labor required to make it. Also of note is Michael Rakowitz’s Return (2004–), a mixed medium installation related to the artist’s struggle to reopen his Iraqi-Jewish grandfather’s date importing business in Brooklyn. His dates became the first goods available to the American public in three decades that could be labeled “product of Iraq.”

Rakowitz’s participation in “Theater of Operations” is especially notable given his admirable early withdrawal from the Whitney Biennial in protest of board member Warren B. Kanders. Citing his opposition to MoMA trustee Larry Fink’s investments in private prisons, he requested that MoMA PS1 “pause” the video component of his installation—a request that has reportedly been denied. Rakowitz isn’t the only artist who employed a strategy of refusal to protest Fink. Phil Collins withdrew his work baghdad screentests (2002), a series of silent video portraits of Iraqis. The outcome is an empty room save for wall text stating that “this work has been withdrawn from the exhibition at the request of the artist.” The dark silence of the gallery is a powerful reminder that you don’t need to bring the war home. It’s already here.