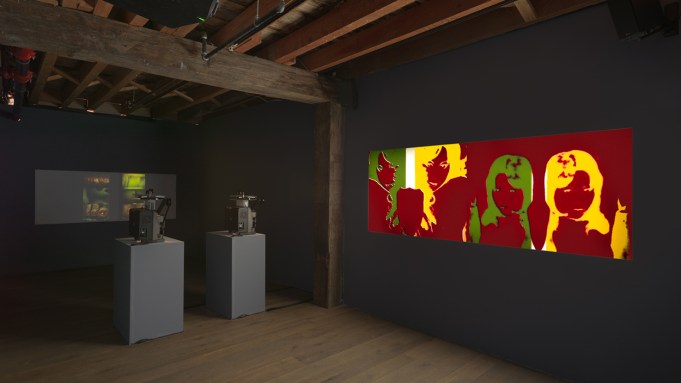 “More than Cinema,” at Pioneer Works in Brooklyn, centers on four pieces from the 1960s and ’70s by Japanese filmmakers Motoharu Jonouchi (b. 1935) and Keiichi Tanaami (b. 1936) that the show’s curators—Collaborative Cataloging Japan (CCJ) director Ann Adachi-Tasch and film scholars Go Hirasawa and Julian Ross—present as examples of expanded cinema. Coined by American filmmaker Stan VanDerBeek in the mid-1960s, the term “expanded cinema” refers to projects in which artist-filmmakers experiment with the spatial relationship between viewer and screen(s). In their original forms, the works represented in the exhibition did fit that description—they incorporated live soundtracks or performances and were shown in unconventional venues like the Tokyo discotheque Killer Joe’s. But at Pioneer Works, unfortunately, they are stripped of the components that made them expanded, and screened simply as one- or two-channel films.

The show, which opened before the coronavirus shutdown and will be on view again for a period after the institution reopens, begins with Jonouchi’s works. Document 6.15 (1961–62) features silent footage he shot from the crowd of a protest against the 1960 US-Japan Treaty of Mutual Cooperation and Security and the continued presence of US troops in Okinawa. Originally, this footage was only one component of a performance that Jonouchi staged as a memorial ceremony for a student killed at the protest, Michiko Kanba, and that involved slides, balloons, and a two-channel soundtrack featuring voices from opposing Japanese political parties. Rather than attempting to re-create this intermedia event, the show gives viewers only a work suggesting cinema verité.

Jonouchi’s Hi Red Center Shelter Plan (1964) is an eighteen-minute black-and-white silent film in which artists including Nam June Paik, Yoko Ono, and members of the Japanese collective Hi-Red Center mock Cold War fears by pretending to design bomb shelters custom-fit to their bodies. The silly, deadpan film shows the artists diligently measuring one another using measuring tapes. A slightly different version, only two minutes longer, played on a small screen next to Jonouchi’s master cut, incorporating additional footage the curators had discovered. Japanese pamphlets and contemporaneous copies of the Japanese art magazine Bijutsu Techo populate a corner of the gallery—ostensibly to provide historical context, but they haven’t been translated, and so will be unreadable to most of the exhibition’s visitors. A similarly unwelcoming gesture is that no seating has been provided in this show featuring hours of footage.

This gets to the crux of the problem: the unique opportunity to see obscure, newly restored works has been conceived more as a presentation of research findings than as a situation conducive to viewing artwork. It’s always difficult to represent underground works adequately in an institutional context, and the curators’ endeavor to find, preserve, and digitize the films is no doubt significant. Still, the exhibition feels like a visit to the archive instead of a presentation capturing the original sense of the works. The show actually appears more at home on CCJ’s website, where the curators’ essays provide historical context and the materials make no pretense of approximating an art experience.

In Tanaami’s 4 Eyes (1975), psychedelic imagery—mostly trippy dots and two-toned footage of women—plays on two channels that roughly mirror each other, though one is made deliberately to lag a few seconds behind the other. In a twenty-five minute video interview accompanying the work, Tanaami says that 4 Eyes was an effort to make film the way he makes graphic design—the artist is best known for illustrations featuring cartoonish motifs—and that his moving-image works never came out the way he wanted them to, due largely to the limits of the technology at the time. His other work on view, Human Events (1975), features footage of butoh dancer Kazuko Tsujimura’s body in extreme close-up. The work was initially a six-channel installation that served as a backdrop for a performance by Tsujimura in which the projections cast her body in silhouette, but here it is only a two-channel film projected at modest scale. Although we’ve made significant technological advances in the half-century since Tanaami made Human Events, we are shown a version that’s even further from what he would have intended.