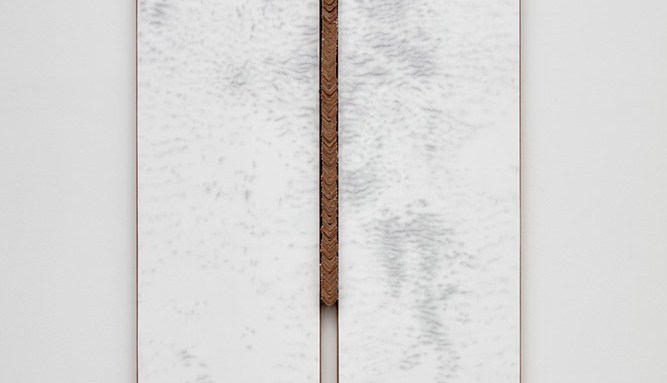 There’s something radically unassuming about N. Dash’s work. In the fourteen spare, often multipartite paintings in her show at Casey Kaplan (all untitled, 2019), she applied subtle formal techniques to panels composed of stretched canvas topped with gessoed adobe grounds that bear beveled edges. A monochrome work near the gallery’s entrance slightly cantilevers a length of Styrofoam over a panel painted the pale blue hue of the foam. The top edge of the exposed-adobe border around the painted field underscores the shadow cast by the piece of insulation. Upon close inspection, one notices that the foam’s cut surface produces a kind of moiré effect, and that the paint alternately obscures and emphasizes the cracks and imperfections of the gessoed adobe underneath it. The work is minimal, but also insistently handmade.

Around half the paintings feature printed images that reinforce the presence of the hand. These images resemble pictures of explosions, or of creamer settling into coffee, but in fact are close-ups of Dash’s “fabric sculptures”—tattered and threadbare bits of fabric that form in her pocket over months as she wears down small squares of cotton with her fingers. Dash photographs and catalogues these ghostly shreds, and here has produced high-contrast silkscreened versions of some of the shots. One print in icy white and lavender is particularly beautiful.

Many of the works on view have an architectural feel. In two whose surfaces are coated in graphite, the compositional space is divided in a way that recalls Roman wall painting in its “ornamental” third phase, particularly the Boscotrecase frescoes on permanent view at the Metropolitan Museum of Art, in which large black fields are separated by skeletal white lines that create the illusion of depth. Dash laid linear patterns of string in the adobe substructures of the graphite paintings. Some of the strings she left in the final works, tracing them in white paint. Others she removed, so that lines of raw canvas emerged. The resultant compositions not only resemble the frescoes; they also evoke Art Deco building motifs and the stained-glass windows of Frank Lloyd Wright’s Prairie style, as do various other works in the show, such as a diptych in which a stack of angled cardboard pieces forms a chevron pattern between the panels. And, of course, Dash’s use of adobe, one of the world’s oldest construction materials, provides another connection with architecture, though the cracked surfaces the medium has produced in her paintings equally suggest tectonic plates and weathered animal hides.

The beveled edges on Dash’s panels enhance the works’ physicality. It’s hard not to think of Sam Gilliam, who began using beveled edges in his paintings in 1967 (a fantastic example, Spread, 1973, is on long-term view at Dia:Beacon). This slight move works magic. It breaks the pictorial plane and makes a painting contend with three-dimensionality and shadow. Dash usually leaves her beveled-adobe edges bare, but sometimes she highlights them in pink or blue paint.

A slender work installed at the end of one room is a standout in the show, not least for its color. The artist draped a panel painted emergency orange in a veil of orange plastic netting. Each element amplifies the other. It’s a simple juxtaposition, but supremely elegant, and shows Dash at her most concise and, arguably, most compelling.