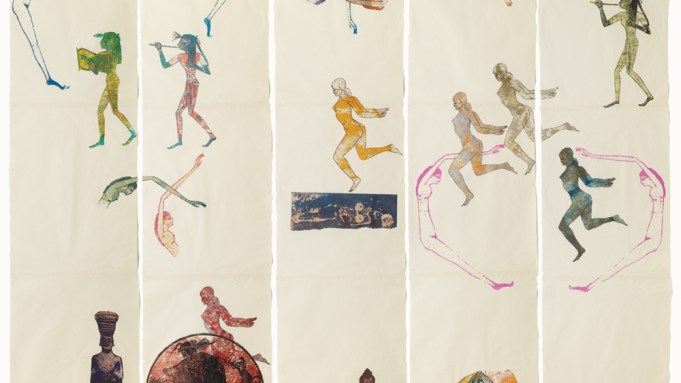 The Museo Tamayo’s survey of work by feminist artist Nancy Spero (1926–2009), curated by Julie Ault, applies a relatively standard chronological narrative to her practice, offering the same progression that was seen, for instance, in the 2008–09 retrospective co-organized by the Museu d’Art Contemporani de Barcelona and the Museo Reina Sofía in Madrid. This narrative divides the Cleveland-born, Chicago-raised artist’s career into discrete cycles punctuated with milestones. It begins with her “Black Paintings,” which she made in the late ’50s and early ’60s while living in Paris; highlights 1966 as the year in which, now in New York, she abandoned traditional canvas-based painting to work exclusively on paper; moves to the well-known “War Series” she produced between 1966 and 1969; shifts to the Artaud period she had from 1969 to 1972; emphasizes 1974 as the year she stops portraying male figures and begins to represent only women; and ends with pieces from the 1980s until the end of her life, a span of time in which she focused on depicting archetypes of womanhood from antiquity to the contemporary era.

Spero’s “Black Paintings” are expressionistic, unidealized portrayals of sex and motherhood in which grayish human figures merge with one another and with dusky backgrounds. Three spermlike white-headed creatures—perhaps alluding to Spero’s three sons—appear to swim through the black ground of Les Anges, Merde, Fuck You (1960). The title phrases float around them, and the middle figure has a ghoulish tongue-out expression that Spero continued to feature in works for the rest of her career. The “War Series” paintings lining the next room are beautifully obscene, oddly delicate explorations of the horrors of the Vietnam war, the racist backlash against the Civil Rights Movement, and the chauvinism that underscored the rhetoric of the time. In these compositions, dead bodies, bombs, planes, phalluses, and national symbols are rendered furiously in watery gouache that crinkles the thin paper.

Spero’s paintings appropriating the writings of Antonin Artaud—the French poet who, as Julia Kristeva discusses, both uplifted and stigmatized the feminine—articulate her feelings of exclusion and alienation as a woman artist in the male-dominated New York art scene. She made her first Artaud works on poster-size sheets of paper but soon—starting with the “Codex Artaud” (1971–72), a collection of thirty-four pieces inspired by ancient papyrus books—began using scroll-style supports, with sheets pasted end-to-end, the results measuring up to ten feet long. She went on to create many more pieces in this format, as seen in the exhibition galleries that pool together the last three decades of her oeuvre. The works in these galleries are populated with characters such as Nut, the Egyptian goddess of the sky; the sheela-na-gig, a figure with an exaggerated vulva found in medieval stone carvings around Europe; Athena, the Greek goddess of war; and modern-day athletes and pinup models. The Goddess Nut II (1990) is a dynamic composition spanning five vertical sheets in which images of Nut in her usual arched-body pose mix with depictions of statuary, a motif of woman who appears to be jumping rope, and other iconography.

Spero was heavily influenced by architectural modes of art, such as frescoes and friezes, and interested in the particular ways the viewer physically experiences such forms. The exhibition acknowledges this by placing some of Spero’s pieces up near the ceiling and others close to the ground. Thoughtful decisions like this allow the potent eloquence of her work to come through. Yet the show’s chronological narrative feels didactic and stiff; it promotes a sense of linear progress that the work actually lacks and often—as in all those years’ worth of pieces in which Spero rewrote visual history using diverse historical representations of women as an alphabet—explicitly rebuts.

While a chronological layout can provide viewers with a useful introduction to an artist’s practice, one couldn’t help but wish for more dialogistic framing. An exhibition juxtaposing works from different stages of Spero’s career would allow for the obvious connections among them to multiply and to form a more complete picture of womanhood. Such a presentation might show Artaud’s and Spero’s shared feelings of disenfranchisement as engaging not only with the violence of war, racism, and sexism, but also with the complexity of motherhood, creativity, and desire. The scope of Spero’s images already illustrates the multidimensionality of women. It’s time the curatorial discourse around her work reflect that, too.