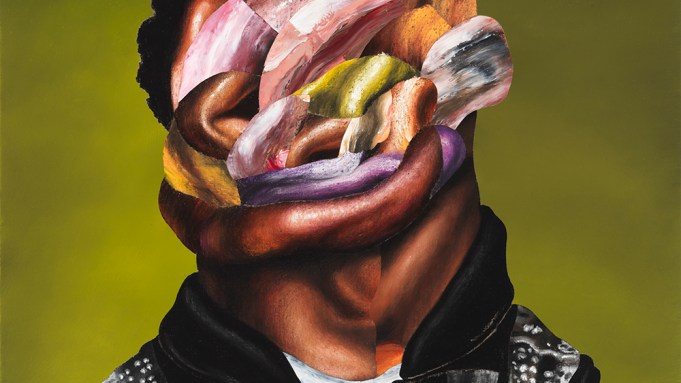 Nathaniel Mary Quinn’s life has been as disjointed as one of his paintings. He was raised in a housing project on Chicago’s South Side, the youngest of five boys. When he was in the eighth grade, an assistant principal recognized his talent and helped get him into an elite boarding school in Indiana. While Quinn was there, his mother died, possibly of a stroke. (He incorporated her name, Mary, into his own.) Shortly after, he returned to Chicago for Thanksgiving, only to find his apartment empty and his family gone. He’d been abandoned at age fifteen.

You don’t need to know this biography to appreciate Quinn’s art, but once you do, his disfigured portraits take on psychic heft. As his exhibition at Rhona Hoffman (all works 2019 or 2020) demonstrated, Quinn chases existential themes—time, memory, the slipperiness of identity—in an inventive style that riffs on Cubism, Expressionism, and collage. If Quinn’s jumbled faces recall Francis Bacon’s, or if his voluptuous mouths evoke those in Wangechi Mutu’s work, that’s part of their recombinant allure. He ransacks fashion magazines, family photos, the internet, and other sources for material that he then remixes into composite portraits. Instead of being representational, Quinn’s art is dense and suggestive, conjuring people whose moods change depending on the viewer’s own.

Although Quinn’s faces look collaged, they’re actually made with oil, paint stick, gouache, and pastel, usually against a plain colored background. He works intuitively but methodically, without preliminary sketches, rendering his source material on canvas with no particular subject in mind. The final pictures suggest the results of an exquisite-corpse-like approach, whereby a number of people each slap a random element—an eye, a backwards chin—wherever they choose. Other artists might easily botch such a style, but Quinn achieves a graceful disorder that conveys unexpected emotion. In Hard to Believe She’s A Mom, Now, a cloud of black hair fills the frame and surrounds a cinched face marked by luscious lips, a patchwork nose, and a single sultry eye. At twelve by nine inches, the work invites intimacy. Its tone could read as tender, stoic, or erotic—an ambiguity that underlies most of Quinn’s portraits.

That ambiguity often resolves into dignity. In Caught Between a Rock and a Hard Place, a man regards the viewer straight-on, his face a jigsaw of misaligned features and inflated lips. Despite this dissonant appearance, something about the man’s staring eye and upright posture commands respect. A Good Man, whose bearded subject lacks discernible eyes but who has that familiar overripe mouth, imparts a similar sense of pride or indomitability. Lights Out, a portrait of a young black girl, feels more melancholy, perhaps because the subject’s eyes are partially obscured with daubs of paint, and the overall palette is more earthen and subdued. That Moment with Mr. Laws portrays an older man in a sweater and collared shirt, his mouth resembling a crooked cut of beef, and his face looking almost inside out with its raw colors and glistening contusions.

At their best, Quinn’s portraits achieve a disjunctive clarity, the shattered faces appearing to belong to whole people. He pulled off this magic trick most dramatically in the exhibition’s two largest works. The three-by-three-foot Apple of Her Eye depicts a man in a leather jacket posed against a mucus-green backdrop. The lower half of his face is a turtleneck of meat that swallows the upper half, which is a riot of smudged colors with an earlike orifice. The other large-scale work, From There to Here, is a diptych, its two panels framed separately. The left-hand one features a man whose face recalls a bulldog’s, and whose outfit is rather flamboyant: boxing glove, floppy-brimmed fedora, silk pants, and a fur stole. The right-hand image is smaller (sixteen by thirteen inches) and shows a grayscale silhouette representing the shadow of the adjacent colorful character. This work is perhaps a metaphor for Quinn’s split life, his own incongruous before and after.