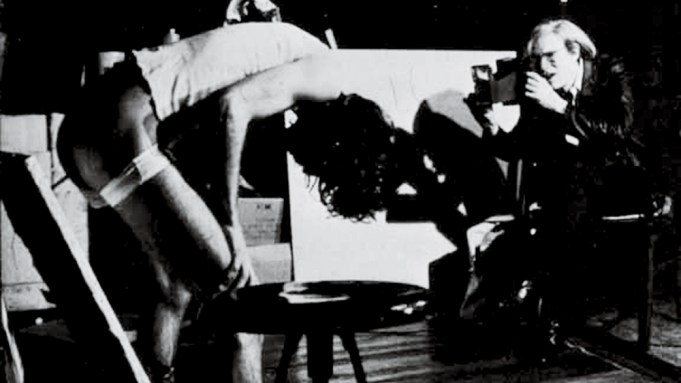 In 1971, Neke Carson went to Leo Castelli Gallery, placed a piece of black paper on the floor, and tousled his hair over it to collect a smattering of dandruff. This performance, titled Dandruff Exorcism, was interrupted by Castelli himself, who asked: “Would you mind doing it someplace else?” “Well, I’m going to the Guggenheim next,” Carson retorted. It was the first of his “Works on Art/Interventional Performances” (1970–75)—rogue, playful pieces that treated galleries and museums as nonconsenting collaborators. A spiral notebook in which Carson transcribed the Castelli encounter was one of the pieces on view in Mitchell Algus’s retrospective of the fringe provocateur’s work, “Glam Conceptualism, Interventional Performance, et aliis rerum.”

Sianne Ngai, in her book Our Aesthetic Categories (2012), defines zaniness as “a style of acting that reflects a conception of life as a rapid succession of projects, as these become immediately dissolved into an undifferentiated stream of activity.” By this measure, you could say that Carson is a master of the zany. He has taken on a variety of roles in his life, including club owner, horse jockey, and (most recently) pianist. From 1978 to 1982 he ran LaRocka Modeling Agency, which managed the talents of a select group of downtown cool kids. Debuting as a runway show and later becoming a nightclub, LaRocka Modeling was at once a performance project and a real business. LaRocka models starred in Liquid Sky (1982), the sci-fi cult classic directed by Slava Tsukerman. Carson also ran a six-week course called Art Therapy for Conceptual Artists, providing lessons on how experimental artists could find inner peace by making work with their hands. While Carson’s art took many forms, it repeatedly, and humorously, addressed themes such as religion, transgression, and frustration with the art world.

Treating Carson’s brash output in a museological manner, the exhibition was a neatly organized presentation of videos, paintings, drawings, photographs, and promotional material. A vitrine housed ephemera related to LaRocka Modeling Agency, including fliers, magazine spreads, and catalogues. A framed copy of the mail-in registration form for the art therapy courses hung on a wall. There was a photograph of a blood-filled cross placed in the meat section of a grocery store in 1970. Titled Bite me and drink what you love, the object was, as the artist put it, “an invitation to vampires to destroy themselves.” The undated drawing Suicide Eggs for People Who Want to Be Born a Splat on the Ground also takes a light-hearted approach to self-destructive impulses. According to Carson’s schema, a person would get into a large plastic egg at the top of a building, then plummet to a fateful end that would be a kind of beginning, as the person would be “hatched” on impact. In one of the artist’s books on display, a photograph shows Carson making a “Z” on a large canvas—the painting is called The Mark of Zorro—with a paintbrush stuck in his anus. Carson called his trademark technique of painting by ass “Rectal Realism.” He became recognized for the approach after he was filmed using it to make a hilarious, accurate portrait of Warhol at the Factory (this documentation played on a monitor here). In a leaflet printed for the exhibition, Carson writes: “Afterwards quips like ‘Boy, that asshole can paint’ were in plentiful supply.”

Carson started his artistic practice at a time when language and documentation were being endowed with as much value as the art object itself. He worked in the spirit of Conceptual art, yet his is one of the more idiosyncratic and elastic versions I have seen. The exhibition successfully captured lightning in a bottle, conveying the essence of his work as quixotic, frenetic, and unpredictable.