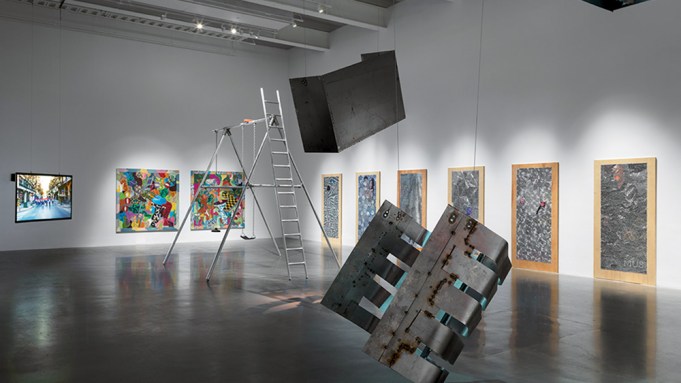 A haunting melody fills the fourth floor of the New Museum. A mix of ambient electronica and Greek folk music called rebetiko, the track accompanies a video projected in a corner. On the screen, figures dressed uniformly in colorful hooded trench coats run down an empty street in Athens. They start in tight formation. The red, white, and blue stripes spray-painted on the backs of the coats create a horizon that disintegrates as they charge away from the camera. A grainy, slow-motion video, Manolis D. Lemos’s dusk and dawn look just the same (riot tourism), 2017, suggests the start of a political demonstration or street fight, both of which are common in the crisis-stricken city. But who are these figures and where are they going? Those questions are never answered in the short video. Instead the viewer is left with imagery that is beautiful but foreboding and ambiguous. The same could be said for many of the other works in the fourth New Museum Triennial, “Songs for Sabotage.”

The exhibition arrives at a time of political and aesthetic upheaval. Around the world, the liberal order falters and fascism is on the rise. Meanwhile, images shape the public sphere as never before. But it is the imagery of base persuasion and discord—spread through memes, false-flag actions, and tweets—that holds sway, not the work of an artistic avant-garde. Against this backdrop, the curators of “Songs for Sabotage,” Gary Carrion-Murayari (from the New Museum) and Alex Gartenfeld (from the Institute of Contemporary Art, Miami), suggest that young artists can operate within the realm of cultural production to subvert the powerful and complex forces dominating this political moment. They present the work of twenty-six artists and collectives as a call to sabotage systems of exploitation. But if it is a call, it is an uncertain one, less a cri de coeur than a murmur of anxiety.

“Songs for Sabotage” takes up three floors of the museum, and a thread of nostalgia runs through much of it. At times this manifests as playful homage, as in two videos that feature low-fi imagery conjuring ’80s and ’90s aesthetics. Wong Ping uses early Macintosh graphics and sounds to animate his absurdist tales of alienation in modern Hong Kong, while Hardeep Pandhal’s Pool Party Pilot Episode (2018) is an oddball rap video full of colorful, squiggly characters and limbs floating through a graffitied landscape.

Several pieces in the show evoke industrial pasts of the developed world. Tiril Hasselknippe’s welded-steel “Balconies (støp i meg, støp),” 2018, hang in the air like skeletons on display in a museum, metal rib cages and spines enclosed in sheet-metal boxes. Zhenya Machneva’s works strike a more elegiac note. Using a handloom, the St. Petersburg–based artist created tapestries that depict industrial settings and mechanical details. The pieces are based on a visit to the Kaslinsky Plant of Art Casting, once a showpiece of Soviet manufacturing that produced monumental sculpture, but now in decline.

Detroit-based Matthew Angelo Harrison’s Prototype of Dark Silhouettes (2018) offers the exhibition’s most striking example of industrial requiem. Sitting on the floor or atop metal tables, blocks of cloudy purple resin enclose West African sculptures or skeletal zebra remains. Some of the objects are fully encased and some jut out as if from melting ice. Combining modern materials and premodern figurines and natural artifacts, Harrison evokes the lost worlds of his hometown’s automotive factories and of African cultures from which, due to the transatlantic slave trade, African Americans have been cut off. The sculptures, through their allusions to the ethnographic museum, suggest a historical lineage between the two places, observed from some unspecified future.

Haroon Gunn-Salie’s Senzenina (2018) explores industrialization from the vantage point of South Africa, where mining is a major economic force. Thirty-four life-size resin figures represent each of the striking miners who were killed by police in the 2012 Marikana massacre. Headless, the figures crouch or kneel in a group, as if waiting for justice. Sounds of mining explosions, automatic gunfire, and anti-apartheid songs play around the installation, a reminder that the tragedy is not some distant memory. With a nod to the movement to bring down statues representing colonial power in South Africa, Gunn-Salie’s piece asks whose lives public sculpture should commemorate.

Several other works on view ask how cultural representations of the past construct our understanding of the present. Cian Dayrit’s oil paintings and tapestries use colonial iconography and mapmaking techniques to counter the imperialist cartographic representations of the Philippines. Similarly, Daniela Ortiz’s painted ceramic models offer proposals for anticolonial public statues, including a headless Christopher Columbus. Claudia Martínez Garay’s Cannon Fodder/Cheering Crowds (2018) lumps propaganda symbols together as paintings on wood cutouts that hang in a crowded mass, opposite a similarly arranged group of geometric abstract paintings on rectangular boards. The symbols, which span Cold War emblems to the icons of the Black Panthers and the Shining Path, writhe and battle like comic book characters. The lack of context makes it hard to say which are good and which are evil.

Shown in a gallery of its own, Anupam Roy’s Surfaces of the Irreal (2018) comprises political drawings and slogans on unstretched canvases. A member of the Communist Party of India (Marxist-Leninist), Roy depicts deformed and brutalized bodies that transform the monstrosity of racial and economic exploitation into mythological imagery. The canvases cover the walls, like banners in an occupied university. A narrow piece of cloth hanging high on one wall bears a quote from Antonio Gramsci scrawled in red: “The crisis consists precisely in the fact that the old is dying and the new cannot be born; in this interregnum a great variety of morbid symptoms appear.” Of the sparse text in the exhibition’s works, this seems the most fitting description of the overall mood.

Given the political environment today, any survey of young artists would be expected to engage the historical moment and provide alternative visions for the future. The curators pulled in another direction, eschewing the concept of the artistic vanguard and instead positing sabotage as a generative means of artistic production. Their stated intent has a nice ring to it, but it’s not borne out in the work itself, which consists mainly of paintings and sculptures and for the most part engages with politics aesthetically instead of structurally. There are no real attempts to subvert or destroy the flows of capital (either financial or cultural) from within, even if that were possible in an exhibition at a major art institution. Instead, many of the artists in “Songs for Sabotage” offer evocative and challenging works that dwell on the ambiguity and alienation of the present, and on the colonial violence on which the present is founded. The artists offer no path out of this mess, only a haunting reflection on the state of things as they are, morbid symptoms and all.