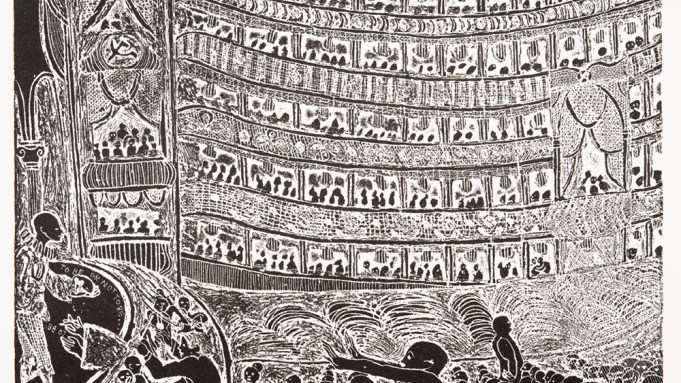 Danish artist and writer Dea Trier Mørch (1941–2001) is probably best known in the United States for her 1976 novel Winter’s Child. Set in a prenatal ward, the book is composed of a series of interlocking vignettes depicting women in the latter stages of difficult pregnancies. As they wait for their babies to arrive, they find solidarity through conversation with one another and attempt to pry information from the doctors. Though there is no overt political message, the novel wears its socialist feminist politics on its sleeve: Mørch writes about the mothers’ class-consciousness, the labor of the hospital’s staff, and forming bonds across cultural differences.

Just as striking as the text is the accompanying series of linocuts depicting childbirth and life in the ward. “Into the World,” a current exhibition of Mørch’s works on paper at the Louisiana Museum of Modern Art near Copenhagen, features these prints prominently. It is the first museum show of the artist’s work, and it feels both revelatory and timely. Mørch worked in the high-contrast and ragged style of agitprop poster art, perfectly suited for inexpensive reproduction, with bold, dramatic lines suggesting sweeping political statements. Yet her work is antiheroic and intimate, concerned with caretaking, the body, and friendship.

Educated at the Royal Danish Academy of Fine Arts, Mørch traveled in Eastern Europe and the Soviet Union in the mid-1960s, finding inspiration in the immediacy and mass appeal of political art and theater there. Upon her return to Denmark, she established a collective called Røde Mor (Red Mother), agitated for the rights of women and the poor, and made explicitly political art from an avowedly proletarian perspective. Three linocuts from 1967—The Yellow Theater, Hamlet in Moscow, and The Bolshoi Theater—depict a single scene of an uproarious crowd, in yellow, orange, and black, respectively. The stage occupies only a sliver of the image; Mørch focuses on the rambunctious theatergoers and the overwhelming mass of bodies packed vertically in the building. It’s a depiction of people united in motion: all the action happens in the audience.

The curators include a quote from Mørch above these works: “As a rule the audience interests me more than the actual performance—the woolen sweaters in the giant spaces.” Though the placement of such explanatory quotes can feel a bit heavy-handed, the artist’s evocation of thick winter clothing is an important reminder of how she saw images of public space as scenes of intimacy, picturing how people might feel, for instance, the heavy, bristly fabric against their skin. In the coarse grain of the linocuts, Mørch finds the textures of daily life. She’s not particularly concerned with depicting the intricacy or beauty of textiles, but with the act of wrapping, comforting, and warming the body. In many of her pieces, messy folds of bedding are in the forefront of images of breastfeeding mothers, recumbent young parents, and swaddled children.

Agitprop graphic art tends to lack compositional depth. Distance is rarely illustrated in detail, often only indicated by a stark contrast between foreground and background. Mørch uses the style’s flatness to make her subjects appear entangled with each other and the world around them. For example, in one of the illustrations from Winter’s Child, the thick lines of a newborn merge with those of the mother and the hospital bed. In another piece from the same series, a midwife’s hands on a child’s emerging head almost seem to flow from the mother’s legs. The outlines of bodies, fluids, and beds bleed together.

Mørch’s political insistence on the centrality of caretaking to social life is inextricable from her revolutionary worldview. A striking linocut from 1974 titled Newborn features a swaddled baby at the center, framed by symbols of freedom, oppression, and nature: red flags, a factory, a woman playing guitar, public housing, a bird in flight, the moon, and the sun. “Into the World” also highlights Mørch’s more straightforward agitprop work. There are pieces celebrating the Cuban revolution, decrying the war in Vietnam, and depicting the misery and dignity of oppressed laborers. Some of these works (such as a tender portrait of Huey Newton) are touching and humanistic and some (the Statue of Liberty with a cage for a head) are terrifically blunt.

The iconography and political references are historically specific, but Mørch’s art makes an argument that feels relevant and urgent now: that there is a fundamental connection between feminism, anti-imperialism, and class politics, and that caretaking is the point at which these egalitarian struggles converge. In Mørch’s images and writings, the act of caring for and about others (and fighting on behalf of and alongside them) is the work of everyday life. Her interest in crowds, audiences, and masses of workers dovetails with her interest in motherhood and the body. She uses an agitprop style, but not to idealize heroes or to lampoon the capitalist class. Rather, the formal particularities of poster art (especially the thick lines making people and objects appear melded) come to suggest interconnectivity and common interests. Though Mørch doesn’t shy from scenes of oppression and exploitation, she insists—beautifully, refreshingly, idealistically—on the necessity of solidarity, both to shared struggle and to shared happiness.