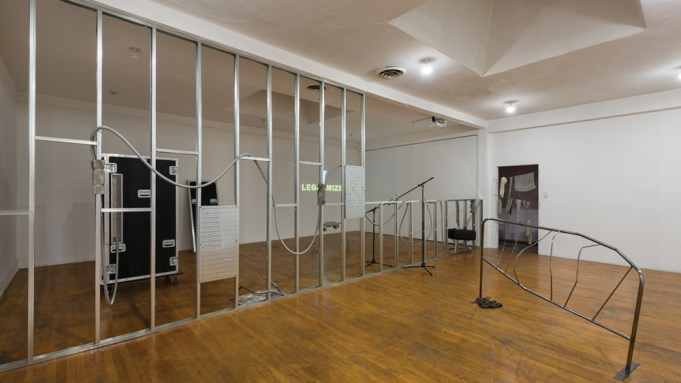 Nikita Gale’s sculptures and installations explore systems of power and oppression using objects like barricades and musical equipment and motifs of American social protest. For the past couple of years—a period in which the Women’s March and countless demonstrations against travel bans, immigration policy, and gun violence took place—her pieces have been notably silent (a pair of unplugged guitars figured prominently in a sculpture, Big Bad Pickup, shown at the Studio Museum in Harlem in 2017; empty microphone and instrument stands wrapped in soundproofing foam were scattered throughout Proposal: Soft Surround Sound, her installation at this year’s Made in LA biennial). As if the artist had been waiting for the right moment to amplify her message, or perhaps had just gotten fed up, her latest solo exhibition offered a kind of personal battle cry. Titled “Descent”—a quasi-homonym of “dissent”—and comprising works made this year, the show publicly revealed the choice she made long ago to disavow her legal surname in favor of her chosen last name, Gale. A subtly but palpably violent atmosphere ran through the show. The name-change seemed to be placed at the nexus of a revolt against legacies ranging from fraught family dynamics to slavery and colonialism.

The presentation was something of a site-specific installation. It was structured around the type of steel framework found within walls. Behind this metal grid, which was titled Descent Screen, were objects that permeated the gallery space with a vexing anthropomorphic presence. Standing like a brawny, impassive security guard, a speaker on wheels played the soundtrack for a video of spiking sound vectors projected on the back wall. Over an aggressive electronic beat, Gale delivered a sardonic monologue. “My name is Nikita Gale D—,” she said, her voice abruptly cut off by a loud buzz, creating a dramatic vacuum where her name would have been spoken. She continued: “The people who know my legal last name are . . . government officials, administrators of capital and management . . . the same system that authorized colonizers to conflate mechanisms of ownership with mechanisms of genealogy.” Gale, who is black, goes on to say that her legal surname was passed down to her by her father, a man from whom, for reasons that remained undisclosed, she is estranged. She speaks to him only once every two years through Facebook.

Touch and Agree explored simultaneous closeness and separation. Two microphone stands were connected by a long rod at the top but, at the same time, divided—placed on either side of the metal framework. Where the microphone should have been was a cement-dipped piece of soundproofing foam. Custody, two guitar stands bound together in the middle with foam, looked like an awkward unbalanced bird, suggesting the uneasiness of Gale’s family ties.

The installation had a stagelike—or, more malevolently, cagelike—ambience, implying that one should not transgress the steel divider. Indeed, the show focused primarily on limitations of movement: physical, societal, and other. Two works, Descent Movement I and Descent Movement II, were installed within two normally traversable doorways in the gallery. Comprising towels, rags, and pieces of foam dipped in concrete and hung on steel rods resembling clotheslines, the works hinted at society’s dirty laundry. They were uncannily reminiscent of seventeenth-century Dutch trompe l’oeil letter-rack paintings, which were often designed to demonstrate a family’s moral or political leanings.

In the center of the gallery stood a metal barricade evoking those used for crowd control at music festivals, street fairs, and other large gatherings. Titled Recommendation, the work is shorter at one end than the other, and its bars are irreparably mangled and twisted, as though something had crashed into the barrier. The dissonance between the mild-sounding title and the harsh object itself was typical of the show, which effectively conveyed a sense of personal and social conflict at every turn. The word “gale” can refer to a loud burst of sound. Indeed, with “Descent,” Gale showed the strength of her voice.