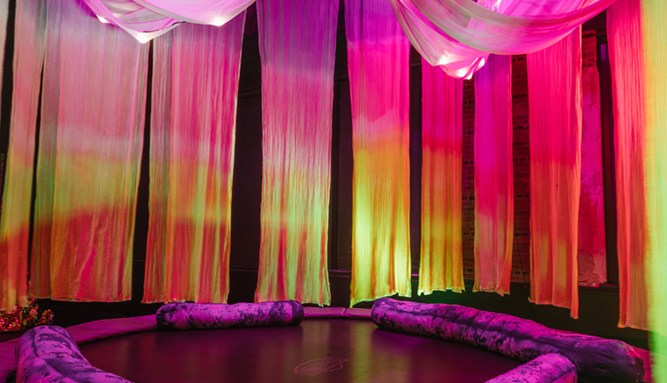 I’m not sure if I should be reviewing niv Acosta and Fannie Sosa’s “Black Power Naps” without having slept in the exhibition for a few hours. The “art” consisted almost entirely of seven moodily lit resting stations, including a number of beds. That said, as a white person, I wasn’t a target audience member of the show, which was designed specifically as a space for black, Indigenous, and migrant people to rest and play in, as an accompanying handout stated, and, thus, as an attempt to compensate for the “sleep gap” between white people and people of color. But my out-of-place feeling was also part of the design; in a humorous but direct way, “Black Power Naps” encouraged you to notice the rarity of such a space in an art world rife with venues catering largely to white audiences. A flurry of recent studies has shown that black people are five times more likely to get less sleep than white people, who get the most of the races analyzed. Even when comparing equivalently high-income individuals across races, such gaps persist. The reasons for this are fairly obvious: the stress of bias against people of color literally affects their sleep, whether it’s because the pay discrepancy between them and white people means they have to work more, as a Pew Research Center study showed; the neighborhoods black people tend to reside in are poorer, as a Stanford study outlined; or the effects of enduring day-to-day discrimination make it hard for the brain to relax at night, as researchers at the University of California, San Diego, demonstrated.

Addressing such findings head-on, Acosta and Sosa sought to create something of a meditative safe space for people of color in Performance Space New York’s black box theater. In a vinyl text piece on the floor at the entrance that laid out the installation’s ground rules, the artists asked visitors not to call the police if they see a black person resting—a funny, absurd statement, considering this was a space for people of color, but not funny as well, since it evoked the troubling frequency with which white people call the cops on black people simply going about their day (and of course alluded to the tragedy that can occur as a result). The exhibition nimbly trod this line between the comical and the sincere. Electric candles lit the entranceway and an “om” chant played ad nauseam over unseen speakers, as if this were a send-up of a yuppie, very white yoga or “wellness” studio. The resting stations, too, were decidedly high-kitsch. Black Bean Bed (all works 2019) encouraged you to lie on a basin of dried black beans swathed in shiny gold survival blankets and cover yourself with a lavender-scented weighted blanket. In Polycrastination Station, a low bed with a tie-dyed sheet was topped with noodle pillows. Suspended on the ceiling above was a mirror ringed by multicolor vanity lights, giving the installation a sex den vibe. Atlantic Reconciliation Station was an ’80s throwback—a waterbed surrounded by panels of gauzy fabric.

When I came by the space it was empty save for a single black person lying on one of the beds. I wondered whether the napper was someone who happened to stumble on this offer of a leisure space or was in fact a gallery attendant hired by Acosta and Sosa. The latter turned out to be the case, which begs the inevitable question of whether or not anyone outside the art world would actually use the space. While “Black Power Naps” was an important gesture in an art world rife with elitist exceptionalism, one hopes its reach would go beyond that limited world.