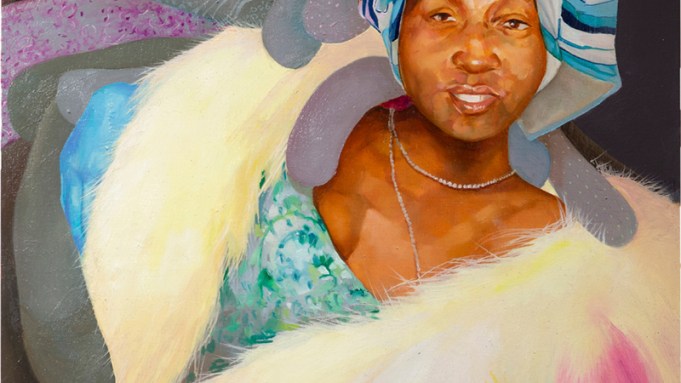 “If I wanted to be a saint, I would have died for our sins. Honey, I would be a zombie. I’d have turned my sisters in!” So pronounces the Marsha P. Johnson character, played by actress Mya Taylor, in Tourmaline and Sasha Wortzel’s film Happy Birthday, Marsha! (2018), which narrates Johnson’s life in the hours leading up to the watershed moment in 1969 when patrons of the Greenwich Village gay bar the Stonewall Inn fought back against a police raid. The film plays near the entrance to “Nobody Promised You Tomorrow,” a celebratory yet politically direct exhibition at the Brooklyn Museum’s Elizabeth A. Sackler Center for Feminist Art that features work by twenty-eight LGBTQ artists born since the Stonewall riots catalyzed the gay-rights movement.

“Nobody Promised You Tomorrow” is not only a survey of young queer artists, however, but a reclamation project for gender-nonconformists and people of color: groups that have been largely excluded from LGBTQ history. Understood in this way, the show updates the sexual politics of Judy Chicago’s monumental artwork The Dinner Party (1974–79), permanently installed at the center of the Sackler Center and comprising a large, triangular dinner table with places set for female figures sidelined in history. While Chicago’s installation focuses on mostly white women, this exhibition posits a more expansive definition of feminist practice that demands allyship with the most historically marginalized groups.

As a corrective to the exclusion of trans people of color from gay-rights history, the show foregrounds the legacy of individuals like Johnson (1945–1992) and Sylvia Rivera (1951–2002). The two activists cofounded the organization Street Transvestite Action Revolutionaries (STAR) in 1970. According to some accounts, Johnson ignited the Stonewall uprising by throwing a shot glass or a brick. This incident has frequently been disputed—including by Johnson herself—and, regardless, Happy Birthday, Marsha! does not revel in the drama of the raid. The majority of the film follows Johnson throughout her day. As art historian Jeannine Tang writes in the New Museum anthology Trap Door: Trans Cultural Production and the Politics of Visibility (2017), the scenes that portray Johnson’s support network—such as one that depicts her having a tearful phone call with Rivera after her friends forget her birthday—are especially important, since art and cinema rarely illustrate “structures of kinship and familial affection” among transwomen. Johnson and Rivera also figure in other films by Tourmaline and Wortzel in the show, while their heritage is honored in Tuesday Smillie’s drawings about raids and her re-creation of a STAR protest banner.

The exhibition highlights lesser-known protagonists in LGBTQ history as well. David Antonio Cruz presents painted portraits of murdered black trans women, and Kiyan Williams, in the video Reflections (2017), pulls together archival footage of genderqueer poet and artist Jesse Harris that was shot by Marlon Riggs for his documentary about black gay men, Tongues Untied (1989), but ultimately cut from it. LJ Roberts’s Stormé at Stonewall (2019), an installation of Duratrans prints on light boxes, offers a punkish memorial to Stormé DeLarverie (1920–2014), who was a biracial lesbian drag king and bouncer in New York. In some Stonewall accounts, DeLarverie incited the riots, by slugging a cop outside the bar after she was arrested during the raid. Roberts’s collagelike prints repeatedly incorporate a line from a correction that the New York Times issued in response to a 2016 article about Stonewall: “They were primarily gay men, not just gay men; at least one lesbian was involved.”

With the show’s focus on visibility politics, what doesn’t make the cut? Queer abstraction, for one. Explicit sex, for another—with the exception of spreads from issues of Camilo Godoy’s zine Amigxs (2017–). Instead, the show probes various approaches to desire. Park McArthur and Constantina Zavitsanos consider queerness and dependency in their spoken-word video about care networks, Scores for Carolyn (2019), while Felipe Baeza creates evocative drawings of male lovers using twine, covering the results in dark ink to the point of near-obscurity. Rindon Johnson’s video poem It Is April (2017) shows his white lover caressing his head, as the dynamics of their interracial, queer relationship, including the impossibility of pregnancy, are limned in voice-over.

For a show largely featuring Millennial artists, there are surprisingly few works concerning the Internet. Two artists delve into online networks and the messy politics of solidarity. Juliana Huxtable’s sculptures display buttons and prints with memes and slogans that proliferate online. One button reads, TERF WARS, referring to “trans-exclusionary radical feminists”; another, DON’T CALL ME CIS. A manifesto-like work by Mark Aguhar (1987–2012), a transfeminine Filipinx artist who gained notoriety as her Tumblr avatar “Call Out Queen,” appropriates the language of the Beatitudes. Litanies to My Heavenly Brown Body (2011), rendered as a vinyl wall text, begins, BLESSED ARE THE SISSIES, and goes on to say the same about sex workers, the disabled, gender illusionists, and consent. Just as Johnson and Rivera, as shown in the films by Tourmaline and Wortzel, rechristened the Hudson as the River Jordan, Aguhar reverently molded the tenets of faith to give voice to her experiences.

Home of the Week: Waldorf-Astoria’s First Miami Penthouse Is So Sky High It Actually Looks Down on Incoming Jets

How the U.S. Can Get Ahead of a Spreading Disease Caused by Fungal Spores