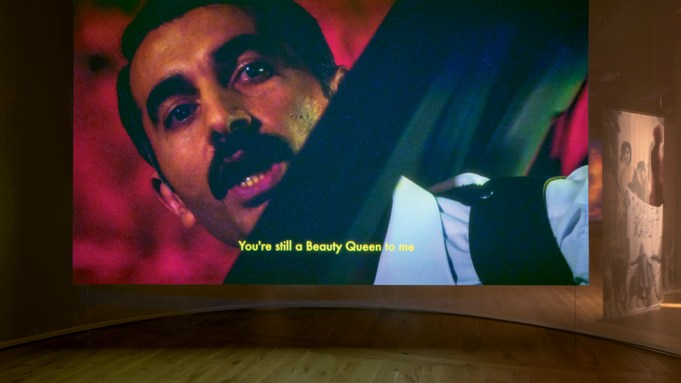 In November 1996, a fatal car crash in the Turkish town of Susurluk led to one of the biggest corruption scandals in the country’s history, after caches of money, drugs, firearms, and passports were found in the vehicle’s trunk. Soon, evidence emerged that the supposed accident was actually an assassination, and as links between government ministers, armed forces, and organized crime were uncovered, the notion of a “deep state”—a politically powerful cabal pursuing hidden interests—began to develop.

Noor Afshan Mirza and Brad Butler’s film installation The Scar (2018) offers a complex, highly fictionalized take on the events leading up to the crash, and on a sordid political situation in a country whose state-level corruption has hardly abated in the decades since. The London- and Istanbul-based duo conceived the work in three parts or “chapters,” each of which had its own, curtained-off projection area in the gallery. In the first chapter, “The State of the State,” we follow the doomed, nighttime drive of four characters based loosely on the crash’s real-life victims. We see a police chief at the wheel, a nationalist politician next to him, and a mafia boss–cum–government hitman in the back, with his girlfriend alongside. Speaking in Turkish, the quartet converses, argues, swaps stories. “The state takes care of everything,” says the police chief, as the radio plays news of political dissidents being blacklisted as terrorists. A reddish light suffuses the scene, giving it the feel of a David Lynch film. There’s a Lynchian quality to the editing, too, which plays with chronology and narrative. Some shots are flashbacks or flash-forwards; others are hallucinations, as in the cop’s vision of a strange, tattooed man standing by the car window; there are even surreal cutaway scenes, including one in which the three men stand in a room together before a mounted boar’s head, as if having a secret society meeting. This whole chapter feels extraordinarily like a dream, in that every action and image seems freighted with significance yet nothing ever completely makes sense.

In the next chapter, rather cleverly, things begin to cohere somewhat. “The Mouth of the Shark” tells the story of the same car journey, but from the perspective of the female passenger, who, via a voice-over, offers a gender-based interpretation of the power structures at play, demonstrating a burgeoning feminist awareness. And while the same mysterious dream-logic operates—with cuts to a woman in a forest nailing her red dress to a tree, and sequences where the hitman uses a high-heeled shoe as a phone—certain details from the first chapter are fleshed out. There’s a sense of the characters themselves trying to comprehend their situation, the narrative they’re all ineluctably caught in.

You might expect, then, that the final chapter would resolve things further. Unfortunately, that isn’t the case. Instead, “The Gossip,” a three-screen projection, portrays—along with other scenes, including bits of interpretive dance—various sci-fi future scenarios in which a feminist society is being or has been constructed. There’s a slightly unclear utopian sequence in which the hitman’s girlfriend features as some “Star Trek”–style spandex-clad figure and the male passengers are shown in an interrogation setting, perhaps being confronted with their patriarchal crimes. But the main plotline involves a multiethnic circle of female revolutionaries sitting around a campfire, discussing the insurrections taking place in their respective countries.

It all seems a far cry from the work’s initial premise. Of course, in the age of #MeToo, the subject matter felt timely. But it was a pity that the ideas in the third chapter—with the group discussing everything from intersectionality to economic self-sufficiency—were presented in such a didactic way. Even more jarring were the film’s own unresolved issues. Why, for instance, was it up to the sisterhood’s sole African representative to sing a lilting, earthy folk song? And why were the actors playing the revolutionaries so uniformly young and good-looking? Such factors made for a decidedly odd rebuttal to patriarchal norms.