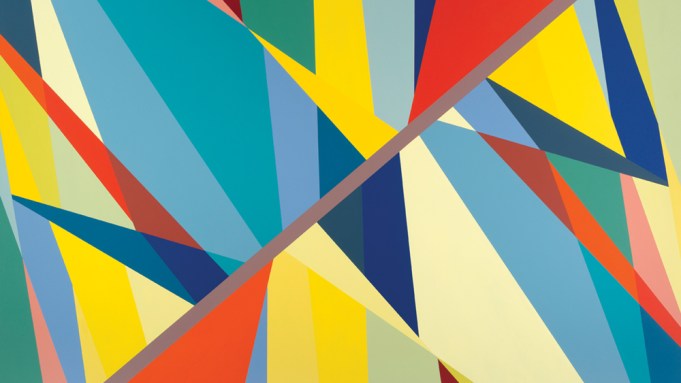 Entering Jack Shainman Gallery’s Twentieth Street location for Odili Donald Odita’s recent exhibition, viewers were met with The Other Side of the Wall (2018), a beautiful large-scale painting on canvas. The work did, as its title suggested, appear a little at odds with the space, its kaleidoscopic pattern of hard-edge shapes standing in contrast to the gallery’s plain white walls and concrete floors. Bold contrasts are in fact key to Odita’s work, in which different-colored, angular forms are arranged in compositions defined by rhythm and tension.

The show, titled “Third Sun,” brought together fourteen new and recent paintings by the Nigerian-born, Philadelphia-based artist and demonstrated his singular abilities as a colorist and abstract thinker. His exploration of the expressive potential of color places him within the tradition of black abstract painters such as Alvin D. Loving, Howardena Pindell, Alma Thomas, Stanley Whitney, and William T. Williams. Yet his work bears an energy and complexity that are all his own.

Especially striking are the ways in which Odita’s colors seem to both complement and resist one another. In contrasting soft hues with hard lines and piercing dark shapes, the artist creates not only movement but ambiguous space into which his colors seem infinitely to extend. Ranging in scale from small to larger than life, the paintings in the main gallery produced an array of effects. In Place (2018), a rectangle of horizontal, angled shapes in a dark, muted palette energizes a background of brilliantly hued vertical wedges. Great Divide (2017) is bisected diagonally by a thin, gray band that essentially acts as a visual ellipsis in the brightly colored composition. In three paintings on wood—Van Gogh’s Trees (2016), Time Machine (2016), and the show’s title work (2017)—Odita has left large portions of the support exposed. The wood’s texture offsets the flatness of the acrylic and adds dimension, while its natural hue serves as a foil for the bold paint.

Celebration and subjectivity are the themes Odita touts in a statement that accompanied the exhibition, and his works do have a euphoric, evocative quality. “It is my intention to utilize the idea of ‘celebration’ as a performative for freedom,” he writes. Though Odita’s paintings are not explicitly political, their offering of celebration as a form of resistance is particularly powerful given this nation’s dire circumstances, as is his ability to show how color can reflect the complexity of identity and our attempts to place ourselves in a complicated world.

How to Watch the ‘This Is Us’ Finale Online Free

Make Gardening a Breeze With the Best Potting Benches of 2022