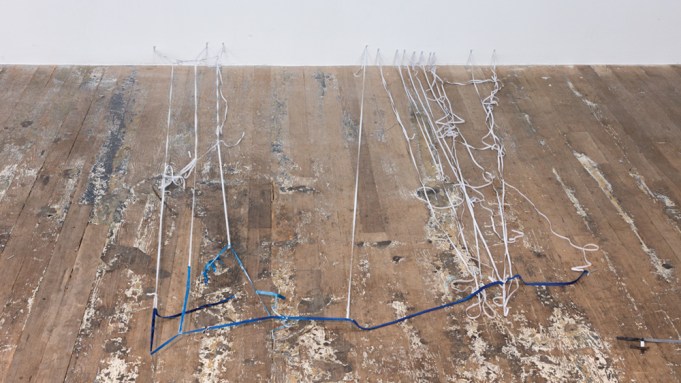 New Museum founder Marcia Tucker was famously fired from the Whitney for curating a Richard Tuttle retrospective that included, among other things, string laid out on a rug. To Hilton Kramer, who reviewed the show for the New York Times, it was “remorselessly and irredeemably less . . . and fairly bask[ed] in the void of lessness.” One wonders what the late conservative critic would have thought of Olga Balema, whose nebulous sculptures are featured in the current Whitney Biennial and whose recent exhibition at Bridget Donahue, “brain damage,” consisted of long elastic bands crisscrossing the floor of the space, some painted and others left their original white. If Tuttle espoused an economy of means, Balema has a maximalist tendency, filling the gallery with so many elastics stretched between nails and staples that you had to be careful where you walked, lest the whole thing break apart. Given the prevalence today of artwork focused on digital means and political subject matter, Balema’s use of such a dumb, simple material felt somehow poignant and rousingly different.

Balema spent the months before “brain damage” laying out the bands in her studio, stapling them to the walls, gluing them together to form joints, and nailing them to the floor. Thirteen works took shape. They appear nearly indistinguishable from one another, though, as they say, God is in the details. 1 (all works 2019) looks like a sagging stepladder hovering horizontally over the ground and culminating, where it attaches to the wall, in a rogue assortment of white, gray, and black bands that curl like ribbons. Installed a few feet to the side, 2 features bands painted in dreamy swaths of green, brown, and umber. It provided one of the few decidedly vertical moments in the show, with three of its bands stapled a couple feet or so up the wall—one connected tightly to a nail in the floor and continuing along an angled path, and the other two hanging down sort of lazily as part of an unstretched design. Who knew elastic bands could have so much character?

In 4, unpainted bands stapled to the wall trail into pastalike messes on the ground or attach to blue-tinted bands that wrap around nails at the work’s other end, while 5 is a barely-there stretch of two bands. Both works feature elastics with stray nails attached to their ends: vestiges of the works’ installation in Balema’s studio. Such details made you wonder how far the works at Bridget Donahue might have strayed from their original versions, and where the line between repeatability and site-specificity is when the medium is a bunch of strung-together elastics. In any case, Balema’s skillful handiwork commanded the space, providing an instance in which less, in the form of a painfully mundane material, was notably more.