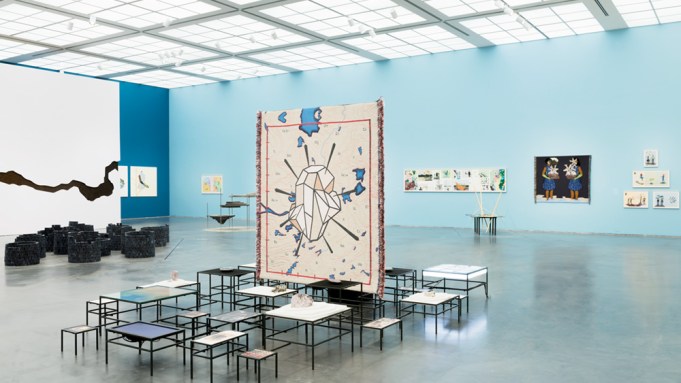 The title of Nigerian-born artist Otobong Nkanga’s first major survey in North America, “To Dig a Hole That Collapses Again,” referred to the Namibian town Tsumeb, which was founded in 1905 by German colonists seeking to pillage the area’s ore deposits. The sapping of local resources to produce globally distributed consumer goods was the overarching theme of the exhibition, which brought together an assortment of Nkanga’s sculptures, installations, tapestries, paintings, drawings, and prints from the past fifteen years.

Certain sculptures incorporate materials—tea leaves, spices, mica, malachite—common to colonial export operations. The tapestries, meanwhile, have a pixelated quality that recalls the screens on digital devices, which are frequently produced from Congo-derived minerals whose extraction has funded bloody conflicts. In addition, some of these textile works, such as Infinite Yield (2015), which portrays a figure standing in a hole and obscured by rocky forms, feature natural and shiny synthetic fibers woven in wavy configurations that evoke moiré patterns on video screens. Nkanga currently resides in Antwerp, and her work takes up the history of her adoptive country: the Flemish tradition of cloth manufacture stretches back to the Middle Ages, and colonialism has played a significant role in Belgium’s economic health (in the sixteenth century Antwerp prospered in part by importing products of slave labor in the West Indies such as sugar and tobacco; and in modern times Belgium had two major colonies in Africa, controlling the rubber- and copper-rich Congo starting in the late nineteenth century, and then, after World War I, adding the Ruanda-Urundi territory to its holdings).

A common vocabulary of images is found across Nkanga’s textiles and paintings. For instance, bodily fragments—including pairs of legs unencumbered by upper bodies, and marionette-like arms sporting holes at the shoulders—are frequently rendered as components of spindly contraptions, often spearing, digging, or hacking away at flatly rendered landscapes. The influence of Duchamp’s Large Glass (1915–23) is obvious in such works, especially the mixed-medium painting Social Consequences II—The Overload—Projectiles—Piercing Pressure—Hostage—Waterscape—The Overflow (2009), in which a cluster of five overlapping women cranks a mobile-like apparatus with a number of arms attached to it, and a group of leaking containers recalls the barrel forms of Duchamp’s chocolate-grinding machine. While Duchamp’s epic construction only alludes to human figures through object-like motifs, Nkanga’s works often portray actual human forms, suggesting the very real casualties of the Global West’s ravenous appetite for material resources.

The exhibition was organized by Omar Kholeif and suffered from the same lack of rigorous editing that his other recent shows have. The works were aesthetically and conceptually consistent; there were simply too many of them. Amnesis (2018) is a towering, freestanding white wall split horizontally by a fissure in which a fragrant confetti of tobacco, tea, coffee, and cloves is embedded. Looming at the back of the room, it would have been striking if not for the smaller sculptural groups that interrupted the view from nearly every angle. One of these groups comprised hollow towers constructed from bricks of black soap that Nkanga had designed, and was accompanied by a performance element: at specific times the soap was available for sale, to benefit a foundation in Nigeria. When I visited the show at one of those times, however, the “performance” appeared to be just two smock-clad museum employees engrossed in conversation with each other and ignoring all passersby. This seemed representative of the exhibition as a whole, which would have benefited from a pared-down selection of works and a more attentive approach.