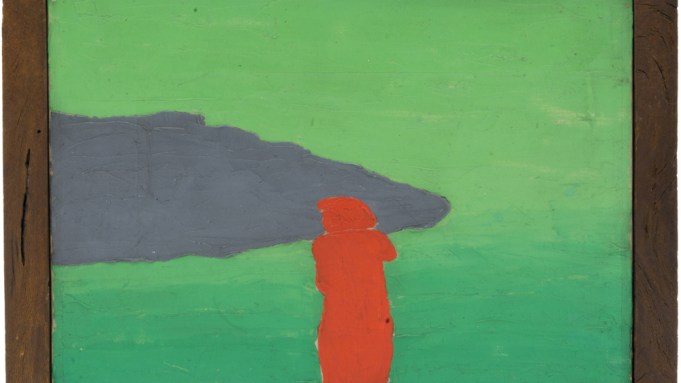 Self-taught, modern primitive, visionary, folk artist: for decades, the field of outsider art has been mired in debate over its terminology. With the exhibition “Outliers and American Vanguard Art,” National Gallery of Art curator Lynne Cooke proposes a fresh categorization for artists practicing outside the mainstream. In her catalogue essay, she describes “outlier” as a term “unmistakably of our era,” noting its popularization by Malcolm Gladwell and data science. She writes that “it sidesteps questions of ‘inside’ versus ‘outside’ in favor of distances nearer and farther from an aggregate so that being at variance with the norm can be a position of strength: a place negotiated or sought out rather than predetermined and fixed.” But while such status can lend a certain kind of strength, her exhibition, which travels to the High Museum of Art in Atlanta (June 24–September 30) and the Los Angeles County Museum of Art (November 18–March 18), aims also to examine the historical bias concerning racial and sexual difference, neurodivergence and disability, and geographic isolation, among other conditions, that has prevented certain artists from gaining access to the art world and the canon.

The show seeks not to present a chronological survey of so-called outsider art but to reveal how self-taught artists’ practices in the United States intersected with those of the avant-garde over the past century. Comprising more than 250 objects in its NGA showing, the exhibition examines roughly three eras: the 1920s and ’30s, when folk art played an important role in the development of the American modern art museum; the ’60s and ’70s, a period dominated by civil rights movements and the counterculture; and the late ’90s onward, during which time outsider art has been increasingly incorporated into the mainstream.

From the outset, the show exposes how regionality and race played into early twentieth-century presentations of folk art. At the NGA, the first themed gallery—which followed a maximal opening installation comprising various assemblage-style works—highlighted drawings from the Index of American Design, a New Deal initiative that provided work for unemployed designers and illustrators during the Great Depression. The agency documented thousands of functional objects from across the country, but mostly designs that fit into a Euro-American narrative, such as Hispano religious pieces from the Southwest. It failed to set up an office in the South, and thus omitted a variety of folk art from that region, including that of many African Americans. Near the Index, Cooke displayed carved-wood pieces by Patrociño Barela, a Mexican-American self-taught sculptor who was named “Discovery of the Year” by Time magazine in 1936 but is largely forgotten today, and works by under-recognized Harlem Renaissance painters Malvin Gray Johnson and Palmer Hayden, who had divergent formal approaches to depicting the black experience. She complemented the presentation with pieces by modernist artists influenced by self-taught artists, like Elie Nadelman, who ran a museum of folk art out of his home, and Florine Stettheimer, a wealthy painter who has herself has been the subject of rediscovery narratives since the 1990s.

During the interwar years, works by “modern primitives” played an important role in forging an American artistic identity and approach to collecting modern art. Several subsequent galleries at the NGA featured works that the Whitney Studio Club—the predecessor to the Whitney Museum of American Art—and the Museum of Modern Art exhibited in that early era, such as the sculptures of the former grave carver William Edmondson (the first African American and first self-taught artist to have a solo show at MoMA, in 1937) and the paintings of Morris Hirshfield (whose exhibition is rumored to have gotten MoMA director Alfred H. Barr Jr. fired). The show posited works like Jacob Lawrence’s Sidewalk Drawings (1943), which depicts two girls making chalk sketches, as nuanced, ironic commentary on the era’s fetishization of artistic outsiders and children’s art.

The presentation abruptly pivoted to the late 1960s. An introductory wall text noting the “civil rights, gay liberation, feminist and countercultural movements” of the era was followed by a room showing cartoonish, colorful works by the Chicago Imagists alongside pieces by the self-taught artists they collected, such as Roger Brown and Joseph Yoakum. The Imagists’ engagement with nonmainstream art was forward-thinking, to be sure, but their position in the show raised more questions than it answered: What were their stakes in the movements referred to in the wall text? Aside from their interest in creative freedom, why did they gravitate toward these particular artists? And how might their collecting habits be differentiated from market speculation?

With the exception of a neighboring space that displayed works included in the 1982 exhibition “Black Folk Art in America, 1930–1980” at the Corcoran Gallery of Art, the remainder of the show further departed from the framework of institutional history elaborated in the initial galleries. Six galleries devoted to individual presentations of male artists who have created personal universes—from the painter Forrest Bess (whose symbolic Jungian-influenced abstractions were accompanied by photographs documenting the operations he performed on his genitals to make himself a hermaphrodite) to the self-taught Alabama-born sculptor Lonnie Holley to the Pictures Generation artist Matt Mullican, who performs under hypnosis, becoming someone he refers to as “that person”—could be seen as reinforcing notions of genius.

Feminist perspectives were addressed explicitly only in the final exhibition spaces. One gallery compared well-known photographers with those who might have once been considered “amateur.” Ostensibly, the two groups were united by a shared interest in female cultural types, performativity, and standards of beauty. The works by Lorna Simpson, Cindy Sherman, and Zoe Leonard analyzed photographic genres like film stills and portraiture, exploring the ways in which societal expectations shape how women are portrayed and even how they portray themselves. But Morton Bartlett’s disturbing photographs of a doll representing a prepubescent ballerina mid-arabesque and dressed in costumes like a bikini appeared to contradict this interrogation, as did the Polaroid photographs that an anonymous artist shot of actresses on a television screen. Meanwhile, the work of Greer Lankton, displayed in a hallway connected to this gallery, served as a corrective to exclusionary feminist art narratives of the past. A trans artist and East Village fixture of the 1980s, Lankton, who died in 1996, made stuffed sculptures, drawings, and photographs of the downtown demimonde and cultural icons that lean toward the grotesque and remain under-known today.

“Outliers” demonstrates a depth of research unparalleled in recent exhibitions on the topic of outsider art, as well as a more diverse artist list than that of many American art surveys. In this sense, it is a landmark show. Furthermore, the way it combines multiple modalities—solo showings, presentations of movements, and institutional histories—in a single exhibition attests to Cooke’s curatorial prowess. Ultimately, though, the exhibition attempts to do so many things that it risks painting a muddled picture. Its final section has a celebratory tone, seeming almost to suggest that the contemporary art scene today, unlike the historical ones being examined, is integrated and inclusive. The art world—especially in the US—is far from utopian. Although some outliers may seek out a position “farther from an aggregate,” many do not. Complex conditions like structural racism and access to healthcare and education continue to exert their force and to keep certain people at a distance.