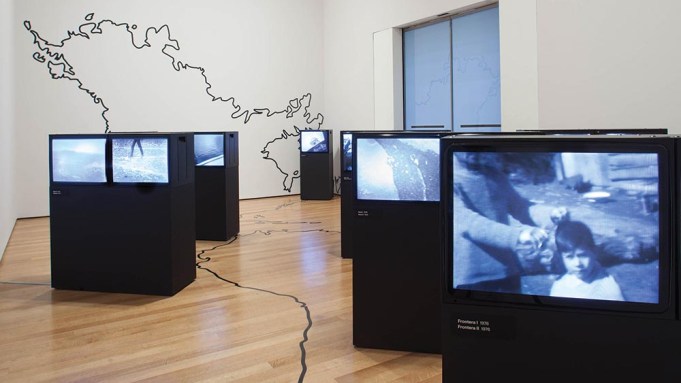 In a 2009 Tate roundtable discussion, curator Anda Rottenberg, formerly the director of Warsaw’s Zachęta—National Gallery of Art, remarked on the fate of Polish art in the aftermath of 1989, pointedly noting that the wave of enthusiasm for artists from the “other Europe” had almost exclusively benefited younger artists, including Paweł Althamer, Wilhelm Sasnal and Artur Żmijewski, who emerged as Communism waned. She suggested that the invisibility of postwar Polish artists on the international stage was rooted in residual Cold War biases, with Western curators assuming that the work of the ’60s and ’70s was confined to socialist realist propaganda or neutered by censorship.

In fact, socialist realism had a particularly short life in Poland, and in the aftermath of the post-Stalin “thaw” of the late ’50s and early ’60s, artistic culture was comparatively permissive by the standards of the region. Throughout the ’60s and ’70s, a wide range of modernist and neo-avant-garde practices flourished, as did contacts with artists abroad. In terms of international artistic exchange, the Iron Curtain was far more porous than tends to be assumed, a fact that makes the relative invisibility of East-Central European artists of the ’60s and ’70s post-’89 all the more striking. However, over the past several years, attitudes toward art of the Socialist era have started to shift, as evident in a handful of recent exhibitions in New York.

Significantly, the works in the exhibition were drawn almost entirely from the museum’s collection, many of them recent acquisitions stemming from MoMA’s C-MAP program, an in-house, cross-departmental research initiative devoted to parts of the globe that have, until recently, been neglected in the museum’s collection and exhibitions. In this sense, “Transmissions” reflected an important realignment of institutional priorities on the part of the museum most closely associated with the hegemonic Paris-to-New York narrative of modernist art.

“Transmissions” was packed with fascinating work made largely by artists who are not well known in North America and are deserving of more sustained attention. Works like Czech artist Jirí Kovanda’s near-invisible actions and urban interventions, the cryptic anti-paintings of the Croatian group Gorgona, and the mass-media experiments of David Lamelas, Oscar Bony and Marta Minujín, who were associated with Argentina’s Instituto Torcuato di Tella, not only trouble the familiar picture of postwar art. They also challenge received notions about the relation of art and politics under authoritarian conditions, too often viewed through a reductive binary lens of dissidence versus complicity.

With that said, I found the show largely disappointing as an attempt to historicize these practices. There are no doubt under-explored connections between artists in Latin America and Eastern Europe. In a brief essay published on MoMA’s website, art historian Klara Kemp-Welch points to a shared interest among many of the “Transmissions” artists in probing the conditions of public space through actions and interventions, citing works like Anna Bella Geiger’s video Passages 1 (1974), in which the artist is seen climbing a series of staircases around Rio de Janeiro, and Milan Kniżák’s participatory actions in the streets of 1960s Prague. Likewise, artists in both regions exploited the possibilities for expanded distribution and international communication enabled by “dematerialized” artworks. However, the show tended to fall back on formal affinities and the undifferentiated specter of state violence as its primary rationale in a way that felt alternately overdetermined and arbitrary.

In part, the exhibition’s issues suggest curatorial ambition hitting up against the inherent limits of a single-collection show: some artists are bound to be better represented than others. The sculptor Henryk Stażewski, for instance—active in the circle of Polish Constructivists in the 1930s and in the founding of Warsaw’s Foksal Gallery in the 1960s, and a mentor to Conceptual artists like Edward Krasiński—was not particularly well served by the museum’s single, small wall relief (Colored Relief, 1963), a missed opportunity to foreground his crucial role as a bridge between the prewar and postwar avant-gardes. More importantly, the show, lacking a rigorous conceptual framework, flattened distinctions not only between but within the two regions: neither “Latin America” nor “Eastern Europe” are homogenous entities, and the contexts in which artists worked varied widely from country to country.

While geopolitics served as the backdrop for the works in “Transmissions,” it was largely elided in two solo shows of important postwar Polish sculptors at New York galleries: Magdalena Abakanowicz at Marlborough and Alina Szapocznikow at Andrea Rosen. The two artists were almost exact contemporaries—Szapocznikow was born in 1926; Abakanowicz in 1930—and belong to the generation of women artists often described as “proto-feminist,” as they explored themes of gender, eroticism and the body before there was a developed theoretical language to describe them.

Abakanowicz first gained international recognition in the 1960s for her “Abakans”—imposing, suggestively vulval forms that she wove from coarse sisal fibers and suspended from the ceiling; throughout her career, she has favored natural materials, like plant fibers and wood, that heighten the primordial, mythological associations courted in her work. (As is frequently noted, not least by the artist herself, Abakanowicz’s father was a descendant of the 13th-century Mongol ruler Abaqa Khan.) The Marlborough show functioned as a retrospective in miniature, with representative examples from a number of the artist’s major series. The selection spanned from a late “Abakan” in black (Abakan Last, 1978) to Abakanowicz’s anonymous “Crowds,” installations of multiple freestanding, life-size headless figures, first executed in burlap coated in resin and then, since the mid-1980s, in bronze.

For Abakanowicz, working with fibers in the 1960s was in part a strategic move: classed as textiles, works like the woven “Abakans” were subject to less bureaucratic scrutiny than paintings and sculptures. They could also be produced and stored with limited space and material resources, allowing her to work on an otherwise impossible scale. The results are, I think, among the most formally inventive works of that decade.

The same could easily be said of Szapocznikow’s sculptures, though her approach was strikingly different. In her mature works of the ’60s and early ’70s, Szapocznikow explored the expressive potential of industrial products like polyurethane and polyester resin, casting and combining bodily fragments—breasts, legs, bellies, lips, tumors—into grotesque, darkly comic hybrids. Details of the artist’s biography, a catalogue of one bodily indignity after the other, have inevitably impacted the reception of these works: born into a middle-class Jewish family in Kalisz, Szapocznikow survived German concentration camps, contracted a near-fatal case of tuberculosis in Paris after the war, the treatment of which left her infertile, and in 1968 was diagnosed with breast cancer, from which she died in 1973 at the age of 47. Given all this, it is not particularly surprising that her work would return again and again to the trope of the abject body; more unexpected is the humor that provides the work with an animating tension.

In her “awkward objects,” as the artist described her sculptures in a statement she made a few months before her death, the impossibility of fixing the ephemeral sensations and experiences of the body is taken up as a conceptual and formal challenge. At Andrea Rosen, which took over representation of the artist’s estate in 2014, the main room showed several of Szapocznikow’s pivotal sculptures, such as Człowiek w Instrumentem (Man with Instrument, 1965), made of cement and car parts, and Piotr (1972), a nude, full-body cast of her adopted son. The smaller room at the back of the gallery, however, contained the exhibition’s most striking works: a selection of Szapocznikow’s “Sculpture-Lamps,” begun in the late ’60s, weird hybrids of sculpture and decor that combine functional light fixtures with candy-colored polyester casts of breasts, lips and genitalia.

Both the Marlborough and Andrea Rosen exhibitions emphasized the ways in which the artists anticipated contemporary trends. This was most explicit with Marlborough, which staged a pendant group show at its Chelsea location that explored affinities between a sculpture from Abakanowicz’s series “War Games” (1987-93) and works by younger, international artists like Justin Matherly and Alicja Kwade. Similarly, Rosen, in the press release announcing her representation of the Szapocznikow estate, suggested that Szapocznikow’s work, made during the heyday of Minimalism, was ahead of its time, more in step with the next generation of artists, like Mike Kelley and Paul McCarthy, than her contemporaries.

A decade ago, Szapocznikow was virtually unknown outside of Poland and her sculptures had yet to be exhibited in the United States, a fact that is particularly remarkable given her current international stature: she was the subject of a significant touring retrospective that originated at the WIELS Contemporary Art Centre in Brussels in 2011 and traveled to the Hammer Museum, the Wexner Center and MoMA over the next two years, and of a 2013 exhibition at the Centre Pompidou. Though her belated canonization is undoubtedly deserved, its swiftness is disconcerting. Let’s hope that her work and that of other recently “discovered” artists will not end up back on the margins, casualties of the art world’s constant appetite for the new.