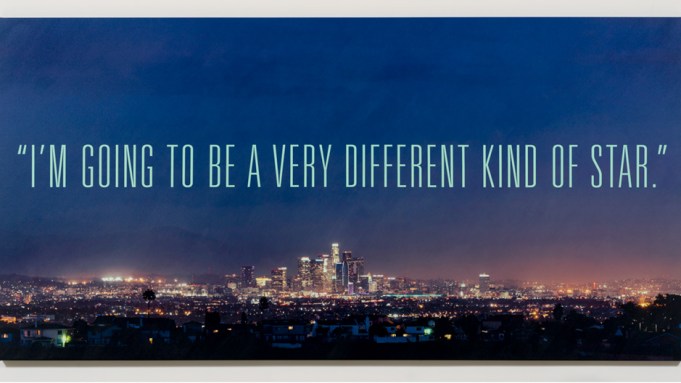 Type “Los Angeles” into the search box of iStockphoto.com and you will see over seventy thousand images, many of which look very much the same. For the works in a recent exhibition at Gagosian in Beverly Hills, Alex Israel spent what must have been many grueling hours scouring the database, finally selecting a group of images that distill the clichés underwriting the romantic fantasy that—for some—is Los Angeles. He then UV-printed the photos on large panoramic canvases, with words by Bret Easton Ellis, his collaborator for the show, displayed across them.

The images—of palm fronds casting shadows on pink-painted stucco, for instance, or the seemingly endless, twinkling panorama seen at night from the hills—are the kind that Hollywood exports to the world in movies and commercial advertising. Such images embody LA’s promise: that life here is blessed with ease, with beauty and health and comfort and success. Here is where everyone can realize their “best selves.” For many resident dreamers, the ubiquity and accessibility of this sublime imagery appear to affirm the validity of the promise. Israel, who grew up in West LA, has often claimed to believe in the dream; his art is not ironic, he has often said. To me, the question of how we negotiate that improbable position is the most compelling thing about his work.

“I’M GOING TO BE A VERY DIFFERENT KIND OF STAR,” reads a text by Ellis printed in turquoise across the center of one cityscape. Ellis clearly does not subscribe to the same guileless Warholian manner as Israel; another text reads: “THE UBER DRIVER ROLLED ACROSS AN OPULENT STRETCH OF MELROSE HOPING TO BE NOTICED BUT WORRIED THAT HE LOOKED AS BLANK AS HIS HEADSHOT.” The pathos stings like salt water in a cut. The sentence works because it is both a generalized cliché, and—as any journey through West Hollywood will confirm—a specific contemporary reality.

Clichés, stereotypes, archetypes, and icons have a centrality within LA that would be hard to fathom elsewhere. The LA-born Ellis is a writer who has made the precise deployment of stereotypes a mainstay of his novels. (Think of Patrick Bateman’s endless inventories of brand names or his excruciating reviews of albums by Genesis and Whitney Houston in American Psycho.) Israel and Ellis’s large paintings approach the status of mirrors reflecting aspects of the city back at itself. Their exhibition was the 2016 edition of Gagosian’s annual “Oscar show,” traditionally the starriest opening in the gallery’s calendar, held on the Thursday evening before the awards. Paintings with acerbic inscriptions like “IN LOS ANGELES I KNEW SO MANY PEOPLE WHO WERE ASHAMED THAT THEY WERE BORN AND NOT MADE” seem pointed directly at the self-fictionalized personalities who are also the paintings’ primary audience.

Of course, everybody prefers to think that the satire is aimed at someone else. While I might consider myself beyond the remit of these paintings, it is unclear where Hollywood ends exactly. Is it possible to be outside its web of desire and fantasy, but still take pleasure in it? The question of whom this work addresses is a problematic one. A stereotype, no matter how sharply drawn, is toxic because of all the shades of difference it excludes. It is fundamentally conservative, arising out of what already exists and reinforcing the status quo. In a 1996 essay titled “Magic Geographies: LA Myths,” the architecture critic Anthony Vidler writes that myths “are essentially class-based; projected on a living map they have created a dead and passive map above which they hover like so many cultural vultures.”

Concurrent to Israel and Ellis’s show at Gagosian, Catherine Opie’s exhibition at the MOCA Pacific Design Center—the Museum of Contemporary Art’s West Hollywood outpost—featured a body of work for which the artist turned her lens toward one of LA’s mythic figures, photographing a home in Bel Air between 2010 and 2011. The (absent) subject of the work shown in “Catherine Opie: 700 Nimes Road” is the Hollywood icon Elizabeth Taylor, the address’s resident, whom Opie never met and who died during the course of the project.

Taylor epitomizes a particular cast of Golden Age glamour, a rarefied elegance that seems impossible in our era of TMZ humiliations and celebrity phone hacks. That said, in her time she was also victim to unprecedented levels of media scrutiny and tabloid speculation, especially during her two marriages to Richard Burton. What more conventional subject could there be for a prurient celebrity cribs exposé? Held in the rainbow flag–bedecked center of West Hollywood, the exhibition was a direct appeal to the local LGBTQ community, for which the AIDS activist Taylor has long been something of a heroine.

Obviousness is not frowned upon in Hollywood as it is in other cultures. What would you expect Elizabeth Taylor’s home to look like? Much of Opie’s show was given over to confirming our fantasies: the lilac carpets, the plush lilac cushions, the rows of Chanel pumps, the handbags, the boxes of jewelry, the cosmetics, the shelf of Oscars, and the photographs of Taylor with famous friends. Even so, Opie does make some interesting images of these things; a close-up of curtains, Balloon Shades, shows the peach satin ruched into the shape of giant ass cheeks, while The Peregrina Pearl is out of focus and overexposed, its subject—the famous pearl Burton bought for Taylor, set in a diamond necklace—abstracted and scattering light.

The most compelling of Opie’s Elizabeth Taylor photographs are the ones in which we are made aware that we are viewing the personal effects of this icon of femininity through the lens of an artist who is herself now something of an icon. The most explicit of these—the photograph that energized the whole show—is Andy Warhol to Elizabeth (Self-Portrait Artist), in which Opie’s silhouette is reflected in the glass of a framed Warhol silk-screen portrait of Taylor signed with an inscription by Andy himself. Behind Opie are the same windowpanes seen in other photographs of Taylor’s living room; the layers of mediation and (de)contextualization in this photograph spiral out to include our memories of other images by and of Opie, and other images by (and even images of) Warhol. Taylor almost disappears entirely. Hollywood—or its human emissary—gets pinned between the asynchronous gazes of two queer searchers.

At the young gallery AA|LA, a creative collective called Auto Body, which operates a seasonal space in Bellport, Long Island, curated an exhibition titled “West Hollywood.” While all seven of the show’s artists are from Los Angeles or its environs, and the East Coast curators seemed to have had a fairly light touch concerning the selection of work, it is nevertheless notable that it is so often the out-of-towners who feel compelled to portray Hollywood in alternative and subjective terms. Most locals feel no such compunction. In Auto Body’s exhibition, one was moved to ask (largely unresolvable) questions about what Hollywood wants or needs, and what the wider world wants or needs from Hollywood.

Presumably, as a barbed ironic comment on Los Angeles’s tendency to regurgitate its own clichés, the curators quoted from James Franco’s god-awful poem “Los Angeles Proverb” in their press release: “LA sprawls: / Gangs, cars, palm trees, beaches, strip malls, 7-11s, smog, beaches / Secret hideaways in the hills above sunset.” None of these things featured in the exhibition. Instead, Auto Body delivered an assortment of works whose relevance to the city of West Hollywood (which AA|LA is near, but not actually in) was sometimes tangential to the point of mystification.

Aria Dean’s sculptures Gear and Gear II (both 2016) responded most critically to the body and commodity cultures that manifest in the retail zones surrounding the gallery; charred FUBU sneakers are embedded in expanding foam, and a shredded and singed wifebeater is hung from two steel carabiners. Other works went further down this apocalyptic road, such as Coley Brown’s affecting photograph of thin branches picked out by artificial light against utter blackness (Untitled [Deeper Than Night], 2015) and Rob Kulisek’s hollow, blue paint–encrusted branches (Spring’s Bounty I and Spring’s Bounty II, both 2016).

Such speculation about the end of nature and about a post-human future is actually not typical of daily life in Hollywood, except as a subject for movies and television. The culture is too narcissistic to imagine a world without it. One of the most beguiling works in the show was by the Instagram-famous indie actress, it girl, and LA heiress Lauren Alice Avery. Above an antique wooden table, a charming painting of an old-fashioned fairground is signed “Alice Avery”—the name of Lauren’s grandmother, who may or may not have painted the picture. The young Avery is known to switch between multiple personas and pseudonyms, so perhaps for her to add “artist” to her portfolio of roles is no big deal. Like Franco and like countless others before her, she aspires to be “a very different kind of star.”