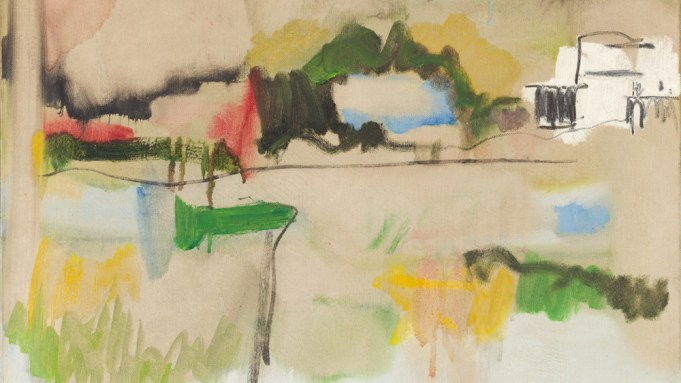 Although Long Island has been a weekend utopia for New York elites since the late nineteenth century, beach culture boomed on the Island’s South Fork during the postwar period. Lured by open space and dramatic coastal scenery, artists affiliated with the New York School began congregating there in the 1940s and ’50s, forming a close-knit community. These urban artists flocked to the tip of the island alongside urban professionals, transforming what had been farmland into a seaside land of leisure. “Painters of the East End” brought together a selection of paintings and drawings by eleven artists, all of them women, who spent time living and working on Long Island, highlighting the resonances between the landscape and their art.

The show, which spanned the late 1940s to the 1970s, intermingled works from different time periods. It also eschewed the heroic scale typically associated with Abstract Expressionism: only a handful of large paintings were included, with most of the presentation consisting of small-scale paintings clustered salon-style. The earliest and (at eight by ten inches) smallest work on view was an untitled 1949 painting by Elaine de Kooning in which succulent white strokes are laid atop a ground of magenta and yellow split by a central pocket of black. Mary Abbott’s large painting Island Edge (ca. 1950s) appears to present a landscape that has cracked into an electric jigsaw puzzle of brushy pieces interwoven with cartoony leaves. Perle Fine’s Image d’hiver (1958), meanwhile, features a tangle of black marks mingling with dashes of peach, gray, and white, and topped with a silvery smudged impasto that glistens like snow.

In two untitled works by the virtually unknown Charlotte Park and one by Joan Mitchell, languid, lively marks announce themselves against white backgrounds. Park’s virtuosic oil-and-crayon compositions (ca. 1965 and 1967) feature dendrite-like configurations in a palette of bright pinks, yellows, and blues that appear frozen mid-twist. In Mitchell’s work (1960), the canvas has been painted and repainted in a muddy palette and accented by a daring reddish orange and touches of white, producing a storm cloud of blobs and drips. These works have intriguing formal similarities that would have been highlighted better by a chronological hang.

While most of the paintings suggested that the artists incorporated the natural landscape into their work only obliquely, Jane Freilicher’s Landscape in Water Mill (1962)—a standout painting on linen—depicted it directly. Freilicher, who broke rank with the Abstract Expressionists in the mid-1950s, frequently portrayed the view from the window of her studio in Water Mill. In Landscape in Water Mill, dry lines convey a horizon and structure in the background, while pastel washes and wet zigzags delineate the rest of the landscape. A second painting by Freilicher, Landscape with Ploughed Potato Field (1966), portrays a similar scene but in lush realist terms. Nell Blaine and Jane Wilson also abandoned pure abstraction in the 1950s in favor of realism. The exhibition included still lifes by both artists: a portrait of a sea shell, wine glass, and lime by Blaine (Shell and Wine Bottle, 1967) and a depiction of a painter’s studio with the window shade pulled down by Wilson (Four Paper Palettes, 1973).

The works in the show challenged the frequent misconception that postwar abstraction is defined by the pursuit of unmediated self-expression. Influenced by the shifting postwar landscape, these artists took up not only their internal worlds but also the external one. Of course, one must note that all the artists featured here were white—and indeed, the pleasures of the East End environment they found so inspiring were overwhelmingly denied people of color. A 1979 painting by Helen Frankenthaler—in which a bright arc of white is smudged atop a horizontal wash of seafoam green—is largely abstract, but its title seemed to hover over the show like an ironic commentary: White Flight.