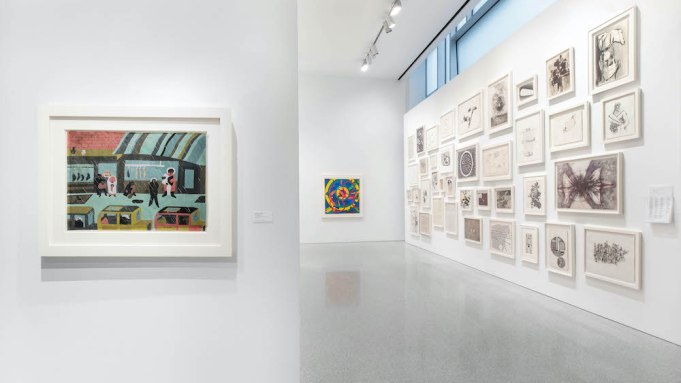 For most of its history, paper was a disobedient medium. It was made from discarded scraps of hemp, cotton, flax, and bark—in a word, garbage—that had to be boiled into pulp and bullied flat by heavy stones. Different kinds of fiber would harden at different speeds, creating hills and valleys, dark patches, and shriveled corners, so that each piece, in its own unique way, refused to be perfectly straight or pale or smooth. Paper wasn’t a neutral host for art but a stubborn work of art in its own right.

At a glance, the theme of Michael Rosenfeld’s current exhibition can seem like a hazy curatorial gimmick. The sixty-three artists, represented here by ninety-seven works, have two and only two things in common: they lived in the twentieth century, and they used paper. By surrendering to the medium’s primordial powers, however, the show—which can be seen by appointment—ends up feeling surprisingly cohesive. Even in an age of 8½ by 11, it suggests, making art out of fragile, resilient paper in some sense means making art about fragility and resilience in the real world. If this sounds like a case of forcing politics where it doesn’t belong, just listen to Robert Hughes, nobody’s idea of an activist-critic. “Drawing,” he said in 2004, “never dies, it holds on by the skin of its teeth.” Small wonder that some of the greatest modern makers of drawings and other works on paper were disenfranchised—people of color and Jews and homosexuals and women and immigrants who knew the sting of erasure and tried to soothe it by honoring, or simply acknowledging, their own warm, imperfect beings. The exhibition’s name: “Paper Power.”

What kind of power? Trying to squeeze a show this big into one sentence is a fool’s errand, but go ahead and call me a fool, then. Working with paper, it seems to me, enabled these artists to produce lean, hardheaded art that was assertive but aware of its own vulnerability, victorious but never quite triumphant, always dangling on the edge of nothingness—i.e., art that was tonally inclined toward themes of oppression and struggle. Charles White’s Leadbelly (1975) has a frankness that his social realist frescoes lack: the work, a handsome blend of oil wash and graphite, depicts a shackled musician who seems to push uneasily back on the emptiness around him. Something similar happens in Norman Lewis’s abstract ink drawings—his pen strokes are a little too far from the sides of the paper, huddled a little too close together, fighting to exist. The exhibition brings out these qualities by rhyming Lewis’s works with those by Lee Lozano and Elie Nadelman, so that even when you turn to a brighter, denser 1962 painting by Alma Thomas, your eyes are drawn to the fraying edges of the sheet and the areas in which the naked ground peeks through the color fields.

Some other standout artists here (Paul Cadmus, Jared French, Pavel Tchelitchew) were featured in “The Young and Evil,” an exhibition that made a splash at David Zwirner last year and seems related to “Paper Power” in more than a couple ways. The Zwirner show made a case for the radicalism of queer artists who worked in oddly old-fashioned mediums like silverpoint. “Paper Power” broadens this thesis without weakening it. Perhaps paper, the most old-fashioned medium there is, holds a paradoxical appeal for all downtrodden people in want of radical change. Thin and fragile, never more than a tug away from tearing, it’s still here, somehow. To cover it in ink or wax or graphite is to insist, in your own modest way, “So am I.”