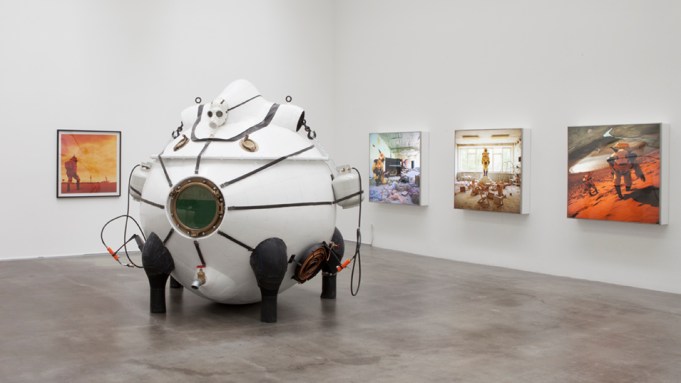 In the years since Mika Yoshitake curated the 2012 exhibition “Requiem for the Sun: The Art of Mono-ha” for Blum & Poe, the gallery has continued to mount shows exploring the work of this 1960s and ’70s Japanese movement. It was exciting, then, to learn that Yoshitake would be organizing a survey of Japanese art from the subsequent two decades. Split into two consecutive parts and titled “Parergon,” after the influential Tokyo gallery that borrowed the term from an essay in Jacques Derrida’s Truth in Painting (1978), the exhibition gathered works by more than two dozen artists. The artistic strategies on view were astonishingly diverse, though generally stood in marked contrast to Mono-ha’s stripped-down, noninterventionist approach.

Part one eased the viewer into this rambunctious era with works that appeared to combine natural items and man-made materials in a manner redolent of Mono-ha, whose name means “school of things.” In the impressive Ground Transposition (1987/2019), Yukinori Yanagi presents two gigantic plastic orbs, one set on the ground and the other filled with helium and floating. The former is covered with soil from the Manzanar internment camp, while the latter is dusted with dirt from land in Okinawa occupied by the United States military. While Mono-ha arose partly in response to concerns about industrialization, national identity, and other societal factors, it only obliquely alluded to them. Many of the works in this show, by contrast, were directly political. Tsuyoshi Ozawa’s Jizoing (1993/2019) invited visitors to climb atop a pile of futon mattresses in the corner of a room to view small photographs shot in locations that speak to social discord and unrest, such as Tiananmen Square and the Tibetan capital, Lhasa. Noboru Tsubaki’s Fresh Gasoline (1989), meanwhile, is a massive, terrifyingly tumorlike neon-yellow sculpture suggesting a dark view of industrialization.

The exhibition’s second part dove right into the era’s pluralism. The first and largest room featured playfully dystopian sculptures by Kenji Yanobe, a photograph of a fake beach scene by Mariko Mori in which she appears four times as a mermaid, and enigmatic paintings by Tadanori Yokoo that were reminiscent of Mark Tansey’s visual riddles. Yanobe’s Tanking Machine (Rebirth), 1990/2019, is shaped like a spherical uniformed creature and filled with a warm salt solution meant to mimic the body’s constitution. The artist intended for visitors to be able to submerge themselves in the water, though this option wasn’t available at Blum & Poe.

In the essay “Parergon,” an examination of Kant’s Critique of Judgment, Derrida argues that elements and circumstances often considered ancillary to an artwork—ranging from ornamental details to display contexts—are crucial components of the work and the way it is received. A series of subdued notebook-size paintings by Kenjiro Okazaki illustrated this theme most directly. The works are framed with unconnected segments of wood. Suggesting fractured fences around unkempt grass, these frames hem in the canvases’ impasto in some areas, and allow it to exist unhindered in others, the thick brushstrokes extending beyond the canvases’ edges to appear against the white walls.

In Study for American Art—Three Flags (2019), created specifically for this show, Yanagi remade Jasper Johns’s iconic painting Three Flags (1958) using colored sand in three plastic boxes laid one atop the other. Red ants tunnel through the composition, slowly breaking it down. In a quite literal way, the artwork relies on that which exists outside it—the ants require ambient air and moisture to survive. Conceptually, it is just as porous. While this wasn’t noted in the show, the work serves as the latest entry in a circuit of appropriation. Johns made several trips to Japan in his lifetime. In 1964 the Japanese artist Ushio Shinohara made a work imitating Three Flags; the following year, Johns created his own version of Shinohara’s imitation and exhibited it at the Whitney Museum of American Art. One got the sense that there were many such backstories to the works included in Yoshitake’s aptly named survey. She again offered viewers a trove of fascinating Japanese art, and if the spate of Mono-ha shows that followed “Requiem” is any indication, audiences can look forward to more in-depth analysis of this historical moment in presentations to come.