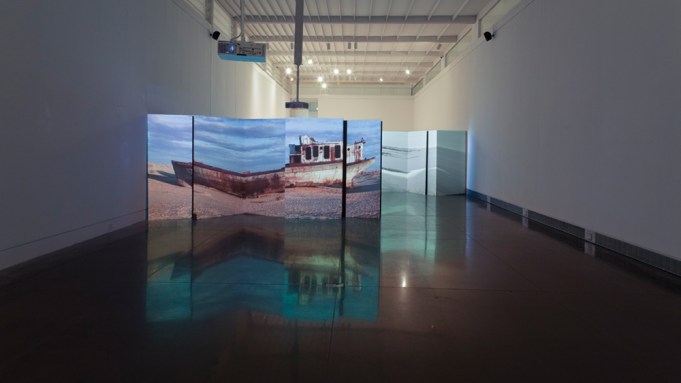 Patty Chang’s show at the Queens Museum, her most expansive to date, encompassed video, photography, glass sculpture, ephemera, and an artist’s book. “The Wandering Lake, 2009–2017” took its name from a 1938 volume in which Swedish geographer Sven Hedin recounts his attempt to map a mysterious, boundary-shifting lake in the deserts of Xinjiang, China. In 2009, Chang traveled to Xinjiang in search of the now vanished Lake Lop Nur, commencing an eight-year project that took her to other parts of China, as well as to Fogo Island in Canada and the Aral Sea in Uzbekistan. In invoking Hedin, Chang questioned his cartographic impulse. Her own exploration of water sought not to map its flow but rather to ponder its displacement and to bear witness to the cost of this often man-made change.

The exhibition’s opening work was also its most resonant. “Invocation for a Wandering Lake” (2015–16) consists of a pair of videos projected onto two sets of large, freestanding folded panels. Stretched across the first polyptych is footage of a rusty ship in the dried-up Aral seabed; across the second, a sequence focusing on a dead whale stranded on the shore of Fogo Island. Slowly, attentively, Chang washes the ship and the whale by hand, her lone figure dwarfed by the imposing forms. During the ablution of the whale, the artist wades through gray-black water as she moves her sponge back and forth across its body. This simple act is an exercise in endurance—emotional as well as physical. “I had never been in the water with such a large dead being before,” Chang writes in the travelogue-style artist’s book. “My sense of mortality was overwhelming.” The videos are wordless and mournful, full of the sound of air and sea, and composed of long, static shots that convey a sense of passing time.

In the installation “Configurations” (2017), still photographs and a three-channel video document Chang’s trip along China’s South-to-North Water Diversion Project, which includes the longest aqueduct in the world. After visiting a village whose inhabitants have been displaced by the expansion of a reservoir, Chang encounters a woman perched on a bridge, ready to commit suicide. When rescuers arrive, “she refuses to be taken anywhere,” Chang recounts in the book, “saying she has no home.”

Chang monitored her own bodily flows as she wandered from site to site and transitioned from one phase of her life to another (over the course of the project, her father died and her son was born). The video shows her peeing into funnels fashioned out of plastic water bottles at various points along the aqueduct. Glass replicas of these urinary devices feature in the installation. The photo series “Letdown (Milk),” 2017, depicts plastic cups, bowls, and aluminum pans holding Chang’s breast milk, which she pumped during a return trip to the disappearing Aral Sea (70 percent of which was drained by Soviet irrigation projects), the work drawing associations between the body and the landscape.

Toward the end of her journey along the Water Diversion Project, Chang went to a place where the aqueduct carries water from a tributary of the Yangtze River under the Yellow River, thus crossing the historic dual arteries of Chinese civilization. Hours of driving led her to an unremarkable spot, a gray bridge overlooking the waterway. As Chang surveyed the scene through fog and rain, she writes, “The surrounding landscape folded in on itself as if a map were collapsing.” In “The Wandering Lake,” it was precisely in these amorphous, unstable spaces, where the map “collapses,” that Chang invited us to dwell.