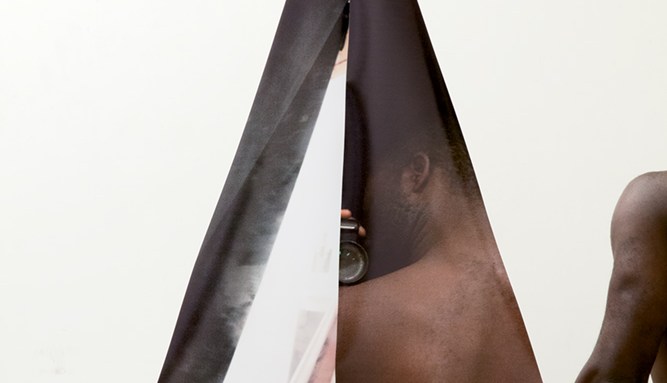 In “The Conditions,” the subject of Paul Mpagi Sepuya’s exquisite photographic portraits was often the camera itself—and portraiture in general. Sepuya became known in the early aughts for relatively straightforward shots of friends, lovers, and acquaintances that were perhaps most notable for their indexing of a particular queer, creative subculture in New York. But while Sepuya was in graduate school, between 2014 and 2016, his practice turned strikingly self-reflexive, becoming as much about the context and space of the photograph—“the conditions,” to borrow this exhibition’s title—as the photograph itself as a “finished work.”

On paper, this sounds as if the artist might be too fussily meta for his own good, recycling textbook postmodernist theories about photography, such as ideas concerning the construction of meaning, the importance of the framing of a work to the work itself (Derrida’s parergon and ergon). That Sepuya incorporated his camera into nearly every image in the show isn’t necessarily interesting in and of itself. What makes the work exceptional is how he implicates studio portraiture in a sometimes-graphic portrayal of queer sexuality that, in his hands, seems so contemporary and yet so rooted in the history of painting and sculpture, a history intertwined with that of the church. Indeed, the work has an almost religious aura.

In Darkcloth (_2000142), 2016, the artist trains our gaze on the type of black fabric that’s usually relegated to the background in photographs. Sepuya, the press release suggests, sees the material as representative of blackness. His race is thus foregrounded in all the works that feature it, which is most. Moving the backdrop to the front in the aforementioned example, Sepuya tenderly drapes it, turning it into an almost rippling, abstract surface interrupted only by a metal clamp holding the fabric to some unseen object and by Sepuya’s arm reaching in from outside the frame. The hand is peculiar, as are many of the hands here: they’re positioned unnaturally for the tasks depicted, their curved, splayed fingers recalling gestures seen in paintings or Greek statues like the famous Victorious Youth.

In Darkroom Mirror (0X5A1812), 2017, Sepuya and one of his models gently handle a camera, pressing the shutter button, their bodies mostly outside the picture frame. The artist’s bent wrist resembles Adam’s as he reaches toward God in Michelangelo’s Creation of Adam fresco. The same gesture appears in Darkroom Mirror (_2150768), 2018, in which Sepuya, again largely out of sight, and a mostly visible woman take the picture. The model here is complicit in her own image-making, at least to some degree. But if the poses of the subjects in the photographs indicate anything, it’s that the actions occurring here are not simple but highly formalized. Even sex is choreographed for public view. In Darkroom Mirror (_2060403), 2018, Sepuya photographs himself giving a joyless blowjob while a second dick waits in the wings. The camera itself doubles as a dick in Orifice (0X5A6982), 2018, poking through a gloryhole-like cut in black drapery. The instrument’s ubiquity in “The Conditions” made its presence seem an oppressive one, as if it were dictating the terms of our behavior. Is it a blessing, or a curse? In either case, it’s there, and going nowhere.

The Levels of Fragrance, Explained: From Eau de Cologne to Pure Perfume