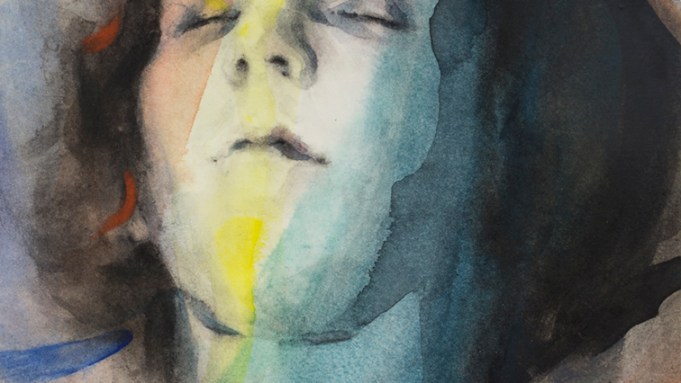 Paul P.’s exhibition at Lulu was his first solo show in Mexico—and his first devoted primarily to portraiture in over a decade. Though the Paris-based Canadian artist is best known for his paintings of lissome young men, he has explored a wider set of interests in recent years, producing abstract paintings composed of soft-edged color blocks, and sculptures and installations that openly flirt with interior design. For the untitled watercolors in this show—most of them closely cropped portraits made between 2017 and 2019—P. returned to a familiar source: gay porn magazines of the 1960s and ’70s from the Canadian Lesbian and Gay Archives in Toronto, which he first began incorporating into his work in the early 2000s. As the artist described in a 2008 interview, he digs through the archives looking for “a body or a face that has, in its pose or expression, something that transcends its sexual context.” He then resituates this material in works charged with centuries of art historical tradition.

At the exhibition’s entrance hung three paintings depicting figures who refuse to meet the viewer’s gaze: a supine man with closed eyes bathed in a wash of bright colors; a short-haired boy with downcast eyes emerging from dark blue shadows; and a young man with his head turned, his wavy brown hair curling away from his smooth, pale nape. These works contrasted with a more confrontational portrait displayed across the room, whose subject stares at the viewer from under a dark unibrow, posing like a youthful outlaw, his chin down and a cigarette dangling from his lips. Hung in the gallery’s second room was a painting in which another ephebic young man looks out through side-swept, floppy hair—like Justin Bieber’s, or Robert Redford’s in the ’70s—with shadowy eyes and a pink, parted mouth. The image reveals little of his body except for an exposed nipple and a hand grazing his cheek, but conveys a sense of lively desire offset by the ashen quality of his skin.

P. often cites nineteenth-century portraitists like James McNeill Whistler, John Singer Sargent, and Thomas Eakins as among his most prized influences. By linking his work to their practices, which are typically associated with portrayals of high society, P. projects his vintage-porn source material into the firmament of classical beauty. But there is also something ominous about these paintings: P., who was born in the late 1970s, has described the period represented by the magazines as an era of gay liberation narrowly missed by members of his own generation, the first for which sex was literally connected to death. The faces in these watercolors have a diaphanous, ephemeral quality that makes them seem almost ghostly. Like ghosts, they hint at origin stories that are never fully disclosed and that viewers must intuit from traces.