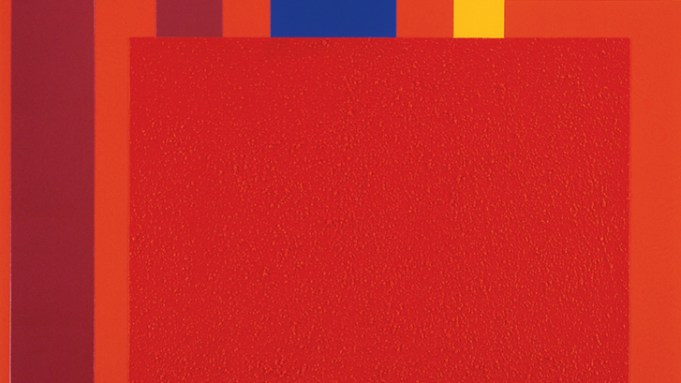 A central fixture in New York’s conceptualist Neo-Geo scene of the 1980s, Peter Halley’s work all but disappeared from the city’s galleries by the start of the 1990s, and for the subsequent decade was exhibited chiefly abroad. Sperone Westwater’s recent show comprised ten paintings Halley made between the late ’90s and the early 2000s that are owned by Gian Enzo Sperone and had never been shown before. Pictorial metaphors of incarceration—and what they evoke about our confinement to capitalist conformism—established the artist’s conceptual bona fides, and, indeed, the works on view featured his trademark “cell” and “prison” motifs: squares or rectangles rendered in bright monochromes or with barlike stripes across them. Two of the works, Two Prisons and Red Cell over Horizontal Red Prison (both 2004), displayed symmetrical stacks of these forms, but the others featured more compelling off-center geometries.

Halley’s painting is often described as reveling in “depthlessness,” whether formally or conceptually, and is regularly posited as a descendant of Josef Albers’s color studies, by way of Ad Reinhardt, Barnett Newman, and the Hard-Edge abstractionists of the 1960s. Yet the off-kilter works in this show evoked equally the legacy of Hans Hofmann’s “push-pull” geometries, particularly Hofmann’s so-called slab paintings from the late 1950s and ’60s, in which discordantly colored rectangles jostle for position, in and out of depth. In the Halley paintings, a large square seems to hover atop an assortment of stripes extending outward at right angles—rigid compositional paths of the type the artist calls “conduits.” Roll-A-Tex, a sandlike paint additive, has been incorporated into the acrylic for the squares, further distinguishing them from the sleek stripes.

The paintings reveal not even the slightest hint of gesture or brushwork, and any movement in them occurs strictly via the conduits. Yet the strident colors somehow produce a tuneful—even exhilarating—chorus in their fervor. In other words, the manic, neon intensity of Halley’s imagery gives the paintings their formal integrity. Bang and Memento (both 2001 and hung here side by side) appear almost identical, apart from their color schemes. The latter work—painted in chartreuse, silver, and light gold—was the sole example in the exhibition to depart from the artist’s characteristic repertoire of Day-Glo hues. It was also the only one that risked looking suitable for a hotel lobby or corporate boardroom.

Not that modernist and corporate aesthetics developed in mutual exclusivity. A concurrent exhibition of Halley’s work in the lobby and on the second floor of Manhattan’s Lever House, in fact, underscored some of their affinities. Built for the soap company Lever Brothers (later, Unilever), the Midtown structure stands as a beacon of International Style rationalism and curtain-wall construction. Halley grew up a few blocks from the building. While it would be a stretch to identify Lever House as the source of Halley’s vertical cells, his extensive presentation there set into relief—quite literally—the architectural dimensions of his work, from its fundamentally tectonic imagery to the constructed-ness of the canvases as objects.

Take, for instance, 646 (2018), which comprises seven linked canvases forming an archway on the wall. The piece not only suggests a representation of a windowed facade but also reads as something built: whether by virtue of the shadows cast by the deep panels or the creases in the canvas that are visible upon inspection. A large-scale mazelike installation Halley created for the show brought into three dimensions his penchant for conduits. Consisting of a series of passageways and chambers wallpapered with reproductions of his works and motifs, the installation culminated in a room blaring Frank Sinatra, Gene Kelly, and Jules Munshin singing “New York, New York.” Halley had yellow film affixed to the glass walls of the building’s lobby and yellow neon lights installed on the second floor, intensifying his paintings’ lurid colors. If the artist aims to critique the “geometricization” of modern life, in this exhibition he also playfully highlighted the pleasures lurking in the ordered spaces it produces.