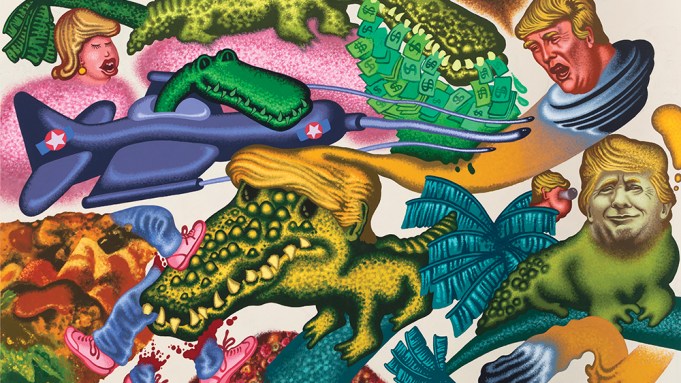 At some point in the depths of my early teens, I was permanently scarred by Mad Magazine. The comic that did the job, a charming little number by Tom Bunk called The Zit, begins with a teenager popping his pimple in the bathroom. As pus shoots onto the mirror, he grins orgasmically. But then, more and more stuff starts to flow out of the little hole in his face—blood, guts, an eyeball, a lung. By the final panel, his innards have flooded the whole room, leaving behind an empty sac of skin. If this is making your stomach churn, you might as well stop reading—the paintings of Peter Saul are not for the faint of heart.

It’s nice knowing that you’re not alone in your traumas, so when I visited the Peter Saul retrospective at the New Museum, I was glad to learn that Mad had left its gunky residue in his thoughts too. He became a devoted reader of the magazine sometime in the late 1950s, when he was a young painter living in Paris. By the middle of the next decade, he’d embarked on a long career that would return again and again to Mad’s house style, all slimy surfaces and rubbery bodies, squished and stretched and squeezed inside out. Though his early work didn’t bring him great success, he was able to keep up a quietly fruitful career, thanks largely to Allan Frumkin, his loyal dealer of thirty years. By the turn of the century, he’d acquired a reputation as a painter’s painter—basically a consolation prize for never catching a big break. All this has changed very recently, and, frankly, just in time for him to enjoy the results: he turns eighty-six this year.

I find Saul’s paintings impressive but—odd as it is to say about such robust blood-and-guts work—thin. He’s an utterly feverish colorist, heir to Bacon and Delacroix, and you can’t help but admire his tense, syncopated compositions. But his style is so given to extremes that, almost by definition, it’s hard to develop or sustain; he always has to be “on.” Every eyeball must bulge Wile E. Coyote–ishly out of its owner’s cranium; every phallus must shoot through a gaping orifice; every naked organ must glow ruby red. In time, Saul’s provocation starts to feel a little one-note—as predictable, in its own way, as the nineteenth-century academic art he is prone to praise in interviews. As satire, his work leaves me cold: instead of exposing flaws and secrets of its subjects, it ends up referring to nothing beyond itself.

One of the earliest mature works in the exhibition, Sex Deviate Being Executed (1964), is also one of Saul’s best. Completed around the same time that Andy Warhol was obsessing over similar material, it shows a gay man smoking a cigarette as he sits in an electric chair. Simple moralistic interpretations get lost in the scene’s queasy virtuosity: the man’s stark profile; his thick, almost monumental arm, which resembles the haunch of an Egyptian sphinx; the decaying blue of his skin against the chair’s lilac. Here and throughout the galleries, the wall texts insist on simple moralistic interpretations anyway—apparently, this painting is about how homophobia, nationalism, and capital punishment are bad, and how a victim “maintains his dignity” in the face of death. The choice of words is unintentionally hilarious, since they appear just a few paces away from a decidedly undignified painting by the name of Human Dignity (1966), in which the title is scrawled on a pair of heaving, planetary breasts. Trust the show’s didactics and you could see Saul as a rough-around-the-edges liberal crusader—but you’d have to ignore the actual works.

Saul would continue to experiment with elements of Sex Deviate for years to come, seeing how far he could stretch the colors, the shapes, and the hysterical tones before they broke apart. To find the right balance, he first had to go all-out. Wild, chaotic scenes need to be carefully choreographed in order to get their point across, and in some of Saul’s 1960s antiwar paintings, plain old clutter tries vainly for chaotic splendor. Vietnam (1966) does everything short of canceling itself out. Its most striking bits, like the fetus silhouette or the GI’s thick, Sex Deviate–esque arm, get lost in a rainbow muddle. The countless superlative ideas blunt each other’s impact, with the result that the painting as a whole doesn’t pack half the punch of more pared-down protest art by Barnett Newman or Leon Golub.

Saul seems to have understood this, because his work from the ’70s onward is less jumbled and more conspicuously planned. He learned to wring more out of less material. The long, gray diagonals of Subway I (1979) keep our eyes focused on the blood, mangled limbs, and sardonic splashes of lime, even as they emphasize the mathematical cool of the composition. Solid, neutral colors take on still greater importance in Saul’s late work, which dominates the second floor of the exhibition. Here, the subjects seem to float in blobs of amber or pink or moldy green, the better for us to study their ridiculousness. And there is plenty: Bush the Younger with a pulverized Abu Ghraib prisoner, Custer & Co. butchering Native Americans, a Trump-haired alligator.

At once exuberant and precise, these paintings grew from decades of bold experimenting and canny problem-solving. But they’re still oddly interchangeable: Saul gives everything the same mucous texture and melted-cheese shape, whether it’s Reagan’s hair or Trump’s smirk, so that the comedy stems from the eccentricity of style rather than anything particular to Reagan or Trump. (The Bush portrait, a notable exception, is the best thing on the floor—you can almost hear the long, Texan “u” oozing from Dubya’s mouth.) Some sort of antiestablishment point is nevertheless gestured at, which partially explains Saul’s ascendance today, as the gatekeepers of the art world scrounge for makers of Radical Art in the Age of Trump.

Suddenly, Saul’s caricature is taken for a kind of realism and his over-the-top energy interpreted as political conviction. “The world, as I see it, is beginning to seem more and more like a Peter Saul painting,” critic Jeremy Sigler noted in 2017, and almost all coverage of the new show has said something to this effect. In the New York Times, Holland Cotter applauded Saul for using “offensiveness as a form of resistance—political, personal.” But resistance to what, exactly? It’s fun to see a painter desecrating kings and sacred cows but surprisingly hard to point to anything truly, viscerally shocking in Saul’s recent political art. Gross-out humor is gross but also rather innocent—most Mad fans were kids, after all.

Where I see innocence, Roberta Smith sees “political incorrectness,” finding that Saul’s work “stands head and shoulders above much of today’s visually challenged political art.” I’ll grant her the second point. As for political incorrectness—isn’t the fact that this artist has gotten such raves in the paper of record a hint as to the work’s true colors? More than once Saul has worried aloud that he doesn’t go far enough in his paintings, and he would know. His late work is full of bright, gleeful naughtiness, the kind that turns stomachs but doesn’t turn away anyone likely to buy a ticket to the New Museum. It’s politically incorrect art for people who pride themselves on being politically correct.