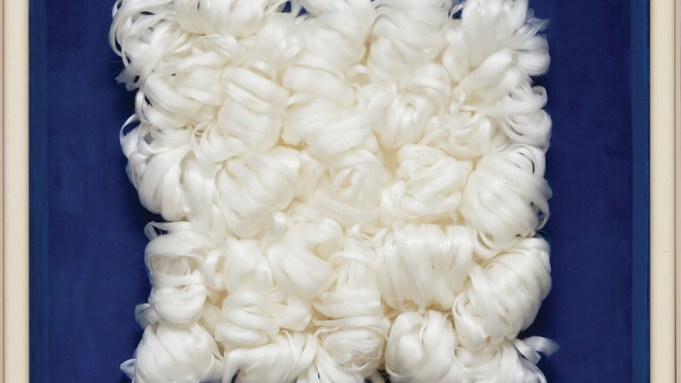 The two Piero Manzoni shows on view at Hauser & Wirth, “Materials of His Time” and  “Lines,” inevitably bring to mind the ample exhibition Gagosian staged a decade ago. Yet while that presentation surveyed Manzoni’s entire body of work, the Hauser & Wirth shows focus on just two projects from the meteoric career Manzoni enjoyed before, in 1963, being struck down by a heart attack at age thirty: his “Achrome” and “Linea” (Line) series. Thus, we do not encounter more illustrious (and infamous) works like his Merda d’Artista (Artist’s Shit, 1961), “Sculture viventi” (Living Sculptures, 1961), and Fiato d’Artista (Artist’s Breath, 1960). Any sacrifice in range, however, is more than made up for in depth. Curated by Rosalia Pasqualino di Marineo of the Fondazione Piero Manzoni in Milan, the exhibitions afford a sustained look at the dynamic work of just a few years—an output of far-reaching consequence not only for postwar Italian aesthetics but for the neo-avant-garde at large. As coeditor of the short-lived, multilingual journal Azimuth and an associate of the German ZERO artist group, Manzoni left behind a legacy vastly exceeding the often deceptive simplicity of his works.

Manzoni began as a painter in the Informalist mode, but came to renounce any association with gesture and expressiveness by the late 1950s. Paring down his work, he pursued formally spare, conceptually rich practices in which painting came to exchange identities with objects of various sorts. The “Achromes” formed a major development in this transubstantiation. In the fall of 1957, he started fully coating canvases in a soft clay medium called kaolin, which not only gave body to the fabric but served to evacuate it of any color. Soon he extended this monochromatic asceticism, making “Achromes” that incorporated materials ranging from cotton balls to kaolin-covered bread rolls—arranging such components in grids—to tufts of thin-spun glass fiber, in almost every instance framing the resultant compositions. “Materials of His Time” brings together around seventy “Achromes,” and their collective presence reveals the works’ nuances, which are usually lost in isolated museum displays. The lack of color invites intense scrutiny of form. One creased canvas from around 1958 is drenched so heavily in kaolin that it has become sculptural, suggesting a slab of Carrara marble. The work also courts figurative analogies, resembling a ruffled bed or windswept landscape. But again and again, Manzoni brings us back to the mundanity of modern materials.

Indeed, a number of the works employ cobalt chloride, polystyrene foam, and the aforementioned cotton balls—obliquely calling attention to Italy’s economic boom of 1958–63 and the transformation of everyday life ushered in by new, industrially produced commodities. Works in which Manzoni appended glass fragments to the canvas—a trope presumably influenced by the similar experiments carried out by Lucio Fontana, with whom he had a close rapport—are striking. Even more mesmerizing are pieces featuring miniature polystyrene foam balls and pebbles coated in kaolin. Manzoni repeatedly mined the tension between flat pictorialism and sculptural objecthood, invoking the frame as a visual paradigm even as he undermined the primacy of painting. Yet in 1960, he would declare himself uninterested in “any element that is extraneous to the value of the surface.” Such self-avowed superficiality belies hidden depths. It was as pertinent to postwar Italian experiments as it was to the work of Duchamp, Warhol, and the Minimalists.

The exhibition focusing on the artist’s “Linea” series is smaller in scope. The earliest examples on view, from 1960, consist of sheets of paper bearing a single horizontal ink line across them. In subsequent works, Manzoni used a roller to create lines across long strips of paper that he then rolled up, placed in canisters, and sealed. Produced in bulk, these works brazenly flout the notion of painting as a handcrafted manifestation of individual genius. The installation of various canisters here, however, undermines that desacralization. Individually illuminated in a dimly lit room, they evoke relics. One even sits in its own small room, suggesting a holy icon of sorts. Yet while this re-enchantment of Manzoni’s willfully disenchanted practice was lamentable, it was a relatively minor misstep in an otherwise compelling pair of shows.