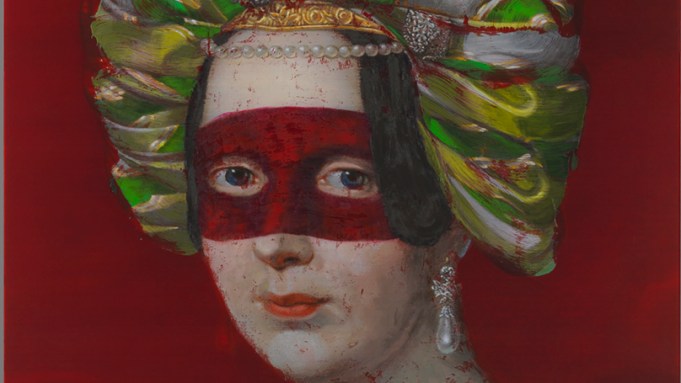 For his most infamous work, The Nazis (1998), the Polish artist Piotr Uklański, based mostly in New York since the early 1990s, compiled an archive of filmic depictions of the Third Reich—or, more precisely, images of actors wearing Nazi costumes in films, drawn largely from promotional stills circulated by movie studios. The work consists of 164 glossy headshot-style crops of these stills displayed as a deadpan frieze, one handsome Hollywood Himmler after another. Uklański may not have anticipated that the Polish actor Daniel Olbrychski—who appears in character within this array—would go so far as to vandalize the installation by slashing his own depiction with a sword when the work was exhibited at Warsaw’s Zachęta National Gallery of Art in 2000, but it’s hard to imagine that eliciting hysterical outrage was not, on some level, his intent. Provocation can be an effective societal mirror: to decry Uklański’s work for glamorizing its dark subject, as many furious viewers did, means admitting that you think Ralph Fiennes looks pretty sexy in an SS uniform.

Uklański’s latest body of work, “Ottomania,” is likewise based on a collection of found images belonging to the nebulous category of the “problematic”: paintings from the fifteenth to the mid-twentieth centuries depicting Europeans dressed in exoticizing Orientalist costume. But unlike The Nazis, “Ottomania” forgoes the alibi that the images are mere reproductions: Uklański has enlarged the source photographs and painted loose copies by hand on velvet grounds, giving these works a thornier ambiguity.

Sixteen of the “Ottomania” paintings were on view at Luxembourg & Dayan. Hanging at the exhibition’s entrance was a copy of the seventeenth-century Flemish painter Michiel Sweerts’s Boy in a Turban Holding a Nosegay (ca. 1658–61), a half-length portrait of an androgynous, turbaned young man clutching a little bouquet in his hand and glancing furtively out of the frame. Though Uklański has copied the figure with a frankly impressive fidelity, he replaces the brooding black background of the original with a suggestively campy field of mauve velvet. Other works take more dramatic liberties with their sources: in Untitled (Amalie of Württemberg, Duchess of Saxe-Altenburg), 2018, Uklański adapts a relatively unremarkable 1826 portrait of the titular duchess posing in an elegant silk turban against a manicured landscape by stripping away the backdrop and placing a scarlet mask over her eyes, its hue nearly matching that of the painting’s bare velvet support.

In fact, as the exhibition progressed, Uklański’s paintings took on an increasingly surreal cast: in Untitled (Judith), 2019, placed in a back room on the top floor of the gallery, the biblical figure, breasts bared, is shrouded in darkness. Uklański has painted only the portions of the scene that are illuminated by a candle: both the shadows obscuring her body and its dark surroundings are formed from the exposed velvet, so that she appears in fragments, as if dematerializing on the canvas’s surface rather than emerging from it.

The real provocation in “Ottomania” is not so much the images Uklański assembles and represents as their polemical framing: his point of departure for this series, according to the exhibition text, is the notion that white Europeans’ appropriative self-fashioning might be taken as a form of sincere homage, or at least part of a more complex bilateral cultural exchange than Edward Said’s Orientalism allows. But the paintings themselves cast doubts on the seriousness of that claim. Paint does ugly things on velvet: the surfaces of these works are almost repulsive—pockmarked or clotted where the acrylic sits uneasily on the kitschy support. If Uklański’s paintings have a baroque sumptuousness from a distance, they tip over into something more garish and unsettling up close, revealing the seductive aesthetics of domination at work.

This article appears under the title “Piotr Uklański” in the December 2019 issue, p. 95.

Rachel Dolezal OnlyFans Leak Reminds Everyone She Has an OnlyFans