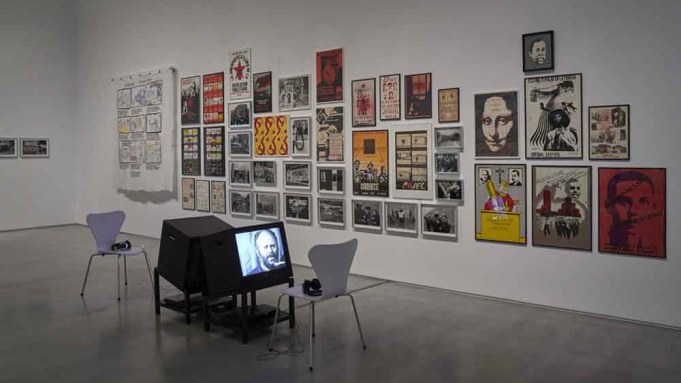 The cultivation of memory is a vital part of contemporary Spanish society. It informs conflicts between federalists and nationalists, socialists and neoliberals. During a recent visit to Madrid, I saw on the same day, just blocks apart, mass protests by impoverished seniors pining for the pensions they had been promised and by regional separatists railing against prison sentences given to leaders who had vowed to restore a fabled Catalonian glory. Such antagonisms play out in the museums as much as in the streets. At the Reina Sofía, they were captured in an exhibition that reconstructed the first Spanish installation at the Venice Biennale following the death in 1975 of fascist dictator Francisco Franco.

The 1976 Biennale was intended by the Italian organizer, Carlo Ripa di Meana, to honor the Spanish avant-gardists who had survived the nearly forty years of Franco’s rule. But when the generalissimo died in the course of exhibition planning, all the buried conflicts and intrigues of Spanish artistic culture came to the surface. Whereas Antoni Tàpies’s paintings and sculptures, including Tabouret au papier mâché (Papier Mâché Stool, 1970) and Cadira i roba (Chair and Clothes, 1970), initially appeared as Spanish contributions to Arte Povera and the American assemblage practice associated with Robert Rauschenberg, they now seemed diversions from the violence of late Franco-ism. Even Antonio Saura, as anti-Francoist as any artist of the period, was held in suspicion by the younger generation. His “Retratos imaginarios de Goya” (Imaginary Portraits of Goya, 1968–72)—silkscreened compositions that recall the facial distortions of Francis Bacon and Otto Dix—were seen as politically useless.

In response to Franco’s death, therefore, a raft of more directly political works were added to the Biennale. These included Alberto Corazón’s 18 de julio. Iconografía de un Dictador (July 18. Iconography of a Dictator, 1976), which comprises rows of facsimiles of the magazine ABC—a Spanish-fascist version of Life—organized according to themes found on the issues’ covers, including family, community, symbols of power, and the dictator’s gestures. (July 18 was the official date of Franco’s victory, in 1939, over Republican forces.) Another was a conceptual artwork by the Grup de Treball that charted (in the manner of the British Art & Language collective) the affiliation and activities of the Marxist press in Catalonia. Yet even these works were insufficient to quell the criticism, and a kind of counter-counter exhibition was mounted, consisting mostly of film and performances. The whole thing was perhaps the typical left-wing-artist clusterfuck, but the exhibition in Madrid represents it with generosity and poignancy.

The constitutional monarchy that emerged post-Franco was anything but radical. The dominant political parties were in thrall to Spanish capitalist entities, such as the banking giant Santander and oil behemoth Repsol, and to the international minders in Brussels, Europe’s unofficial capital. That’s why the exhibition also includes dozens of subversive works made in the half-decade following 1976. We encounter posters, cartoons, photographs, paintings, and prints exploring feminist, queer, and punk subcultures and the anti-psychiatry movement. In woodcuts and paintings from 1979, Victor Mira—channeling Edvard Munch and George Romero—portrays monstrous figures. Pedro Almodóvar emerged from the artistic underground in this period, and one of his early films, Dark Habits (1983), about a community of fetishistic nuns, is featured here.

Illuminating the art and politics of a period four decades distant, the exhibition feels like a single contemporary artwork concerned with memory. It implicitly invokes the current plan to remove Franco’s body from the Valley of the Fallen, a monument that recalls Nazi parade grounds in Nuremberg, and the failure of the Spanish state to reckon with the crimes of the dictator and his regime. It also brings to mind the current Spanish electoral impasse, and a similar one in the United States. Undone by false memories of greatness, we, too, have so far failed to overcome the institutional lock on government held by reactionary parties and leaders.

This article appears under the title “The Poetics Of Democracy: Images And Counter-Images From The Spanish Transition” in the December 2019 issue, pp. 106–107.