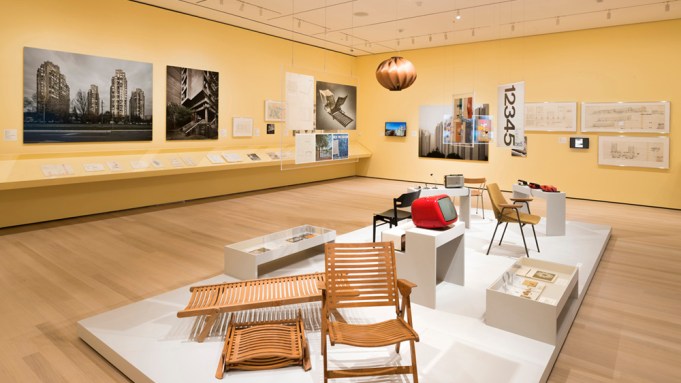 In 1976, black feminist poet and theorist Audre Lorde published “Notes from a Trip to Russia,” in which she marveled at the apparent harmony among diverse ethnicities in the Soviet Union. “And it’s not that there are no individuals who are nationalists, or racists,” she wrote, “but that the taking of a state position against nationalism, against racism is what makes it possible for a society like this to function.” The extraordinarily rigorous and thought-provoking exhibition of Yugoslav architecture, on view at New York’s Museum of Modern Art through January 13, similarly positions socialism as the political foundation for a multinational and anti-nationalist society. Co-curated by Martino Stierli and Vladimir Kulić, “Toward a Concrete Utopia: Architecture in Yugoslavia, 1948–1980” argues that social programs, collectivism, internationalism, and the freedom to experiment shaped the development of architecture in Yugoslavia, and that its distinctive socialist modernism was founded on the project of building a more just and diverse society. A tour de force display of more than four hundred photographs, architectural models, maps, graphs, videos, and installations, “Toward a Concrete Utopia” dazzles its viewers with seductive narratives of anti-fascism embodied in hybrid buildings that amalgamate influences of the Ottoman and Habsburg empires as well as various Western modernisms in the service of Yugoslavia’s socialist revolution.

The exhibition opens with a spectacular three-channel video installation, Mila Turajlić’s We Build the Country—The Country Builds Us (2018). A gorgeous montage of footage from various periods of Yugoslav urban development shows young workers marching in parades, singing and kissing, as well as footage of Tito and urban construction. In the rooms to follow, we learn that religious differences were smoothed out in attractive modernist stylizations, such as the National and University Library of Kosovo (1982) in Pristina, which incorporated both Christian and Muslim elements. Prominently featuring the cube-and-dome module characteristic for both Ottoman mosques and Byzantine churches, Andrija Mutnjaković’s design for the Pristina library was meant to transmit a statement of unity. Zlatko Ugljen’s award-winning Šerefudin’s White Mosque (1979) similarly honored traditional Bosnian mosques while also serving as an unmistakable homage to Le Corbusier’s Catholic chapel Notre Dame du Haut in Ronchamp, France.

Yugoslav architects’ interests in internationalism and global networks were supported by their country’s leading role in the Non-Alignment Movement, which fostered exchanges of diverse styles and collaborations. For example, Milica Šterić, one of the first and most successful women architects in Yugoslavia, was involved in the planning process for seven Nigerian cities and co-designed the Ministry Complex (1978) in Kano, Nigeria, with Zoran Bojović. Yugoslav architects also created large and experimental modernist hotels to satisfy the demands of mass tourism, built to ensure that citizens and foreigners could enjoy Yugoslavia’s beautiful summers. Innovations in home design brought both large-scale housing projects and beautifully designed objects that increased people’s quality of life. Futuristic anti-fascist monuments ultimately signaled the country’s dedication to internationalism and diversity by remembering the divisive atrocities of National Socialism during WWII while promising a peaceful future for Yugoslavia.

And yet we know that in Yugoslavia, as in the Soviet Union, nationalism and ethnic hostility prevailed. The exhibition’s utopian elements are haunted by the dystopian reality of war and the genocide in the 1990s. Nobody knows this better than those of us from the region, including Kulić, who organized projects on the subject prior to “Concrete Utopia.” These include the exhibition “Unfinished Modernizations: Between Utopia and Pragmatism,” first shown in 2012 at the Maribor Art Gallery in Slovenia, and the book Modernism In-Between: The Mediatory Architectures of Socialist Yugoslavia, published in 2012. At MoMA, strategic inclusions of contemporary artists like Turajlić gradually unsettle the utopian narrative. These interventions are the exhibition’s most effective and provocative elements, gesturing at the cracks in Yugoslavia’s concrete utopia.

This immediately became clear to me when I made the mistake of entering through the exit of a chronological exhibition. My journey through Yugoslav history thus began not with Turajlić’s montage but with a 4:43–minute excerpt from Robert Kirchhoff’s documentary A Hole in the Head (2016), showing three men walking past the snow-covered Jasenovac Memorial Site (1966), Bogdan Bogdanović’s monumental structure commemorating the notorious concentration camp on the territory of present-day Croatia. The ethnic divisions and genocides of WWII are catapulted into the present when the film’s protagonists contemplate the impossibility of accounting for all the victims, particularly Roma, as they “were never counted in a census” because “they were not worthy enough to be counted.” These words speak to the continued persecution and disregard for ethnic Roma in the Balkans and Europe, and to a fundamental racism that decades of socialism in Yugoslavia could not eradicate.

In her exegesis of Russian socialism, Lorde draws attention to this very struggle: “the next step in that process must be the personal element. . . . Without this step socialism remains at the mercy of an incomplete vision, imposed from the outside.” When writing about the coexistence of Russians and Asians, she used the example of Tashkent, the capital of Uzbekistan. That country declared independence from the USSR in 1991 and was beset with religious tensions that led to violent events, such as the 1999 car bombings in Tashkent. In Yugoslavia, too, socialism dissolved in the early ’90s and the subsequent violence continued into the early 2000s.

In the exhibition’s catalogue, architectural historian Andrew Herscher argues that Yugoslavia’s socialist design project did not fail, but rather was destroyed by nationalists who vandalized buildings with the intent of eradicating signifiers of the country’s multiethnic foundation—a destruction augmented by NATO’s reckless bombings. But at a symposium early in December, Slovenian art historian Beti Žerovc provocatively challenged this line of thinking. She insisted that the socialist monuments privileged in the exhibition were “meaningless ideological apparatuses” imposed from above by the state, and that they exposed “socialist ideology as very fragile, incoherent, superficial, and somehow incomplete.” Not only had Yugoslavia’s utopian architecture failed to create the society Yugoslav architects had desired, Žerovc suggested, but the “aggressive” brutalism might have further aggravated the shattering of Yugoslavia in the 1990s. Jasmina Cibic’s video NADA: Act 1 (2016) indicates how both of these readings might be expanded and complicated. It shows the process of turning one of Vjenceslav Richter’s unrealized models for the 1958 Brussels World’s Fair into a beautiful string instrument, played elegantly by violinist Dejana Sekulić. While unraveling the authorial power of a monolithic male-dominated modernist architectural history, Cibic reminds viewers just how easily architecture can be instrumentalized.

The exhibition’s inclusion of contemporary art opens its narrative to the ambiguity and nuance befitting a thoughtful engagement with the politics of architecture. And why might a New York audience today crave such discussions? Writing in 1976, Lorde concluded her reflection on Tashkent by saying: “We have internal desires, but outside controls. But at least there is a climate here that seems to encourage those questions.” For Lorde, Soviet socialism thrived on the premise of multinational collectivity, which was only sustainable if its citizens asked themselves how they would or could coexist with ethnic others. It could be said that “Toward a Concrete Utopia” pushes its visitors to consider these questions by remaining loyal to architecture with a decidedly communal purpose and highlighting the compatibility of various religious, national, and international styles in Yugoslavia’s socialist buildings. The exhibition not only fills a hole in the history of architecture; it also offers a positive picture of twentieth-century socialism to the current political imaginary. In our moment of disillusionment with capitalism and right-wing ascendance, explorations of socialism are back by popular demand. But let’s make sure we remember Lorde’s caution to account for our desires and those who seek to author them.