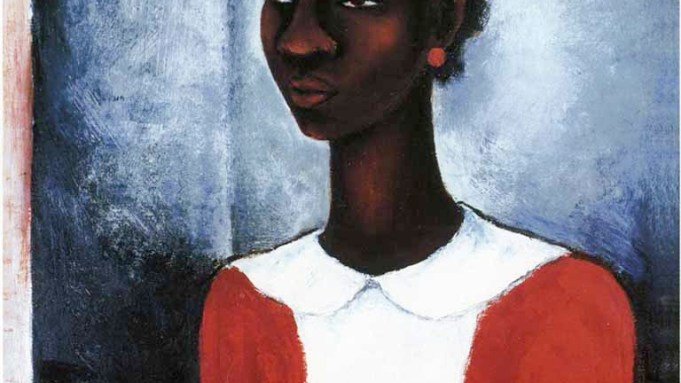 In her 1992 polemic “Olympia’s Maid: Reclaiming Black Female Subjectivity,” artist Lorraine O’Grady rebukes the historical use of black bodies as symbolic “chiaroscuro,” a device meant to throw whiteness into sharper relief. According to O’Grady, Western culture not only relegates black women to the margins of white femininity but also charges them with synthesizing a dialectic of deviance and nurturance: “Jezebel and Mammy, prostitute and female eunuch, the two-in-one.” What better incarnation of this historical violence than Manet’s Olympia, that scandalous cradle of modernist painting? Manet’s 1863 rendering of a Parisian prostitute in the pose of an odalisque accomplished at least two game-changing feats: it spotlighted a working-class sex worker, a fringe player in the economic and social order, and it inaugurated the paradigm of flatness in Western painting—an innovation staked on the lack of modeling of Olympia’s skin, whose cadaverous color was lampooned by contemporary critics. But what of her counterpart, the domestic worker, whose darker skin tones melted into the brothel’s lush background, equally advancing the painting’s proto-abstraction?

“Posing Modernity,” an interventionist exhibition curated by art historian Denise Murrell, proposed a counter-narrative of modernism rooted in the legacy of Laure, the model for the black maid in Manet’s magnum opus. Tracing an episodic history from mid-nineteenth-century Paris to the Harlem Renaissance to the postwar art of the African diaspora, Murrell’s three-part exhibition—now on view in an expanded version at Paris’s Musée d’Orsay—framed the figuration of black women as integral to the development of modern art. As Murrell documents, after France’s final abolition of slavery in 1848, newly emancipated black people, often Antillean migrants, became an increasingly visible part of the everyday urban life that Charles Baudelaire legendarily endorsed as the new domain of art in 1863. The diligent social art history of “Posing Modernity” gave names to anonymous models, often illuminating their roles as nannies or nightlife performers in an evolving black proletariat.

The exhibition’s first and strongest segment pivoted around Olympia (shown in reproduction at the Wallach) and Manet’s two other portrayals of Laure: the first in Children in the Tuileries Gardens (1861–62), a vernacular scene featuring nursemaids and their charges in public gardens; and the second in a remarkable portrait titled La négresse (Portrait of Laure), 1863. The consistency of a single sitter across these works foregrounded the artist’s crucial negotiation of individual versus type in his paintings of the 1860s. Consequential in modernism’s break with established genres of academic Salon painting, this problem also had particular implications for racialized subjects, as the exhibition demonstrated through contemporaneous orientalist scenes, ethnographic photography, and racial caricatures from mass media.

Laure, of whom we know little, served as the model for a caregiver in the subtly ominous Children in the Tuileries Gardens; her face, like those of the white inhabitants of the scene, is blank and featureless. In La négresse Manet engages the opposite extreme, rendering her particularities in a flattering portrait which is nonetheless titled generically. In Olympia, finally, we witness a kind of amalgam: Laure plays a narrative role but her detailed depiction exceeds that of a stock type. The crisis this painting originally provoked was due, in part, to a problem of recognition: it insisted that viewers see its subjects as contemporary and commonplace, not remote or idealized, and yet still deserving of artistic representation. By revealing Laure’s trajectory through Manet’s various works, Murrell argues that the black maid’s figure, as much as Olympia’s, was elemental to this breakthrough.

The exhibition’s next section exposed the startling and little-known historical confluence of midcareer Matisse and the Harlem Renaissance through his repeated visits to New York in the early 1930s. Portraits by James Van Der Zee, William H. Johnson, and Charles Alston hung alongside Matisse’s 1916–17 paintings of the black model and former circus worker Aïcha Goblet, while archival facsimiles established Matisse’s affinity for the jazz music and theater of Harlem. These juxtapositions suggested an aesthetic exchange between black artists and the era’s preeminent European painter, although this relationship was nebulously evoked rather than spelled out in the exhibition. Matisse’s illustrations for a 1947 edition of Baudelaire’s poetry collection Les fleurs du mal, much of which was written for his biracial mistress Jeanne Duval, were proffered near the close of this section to suggest the impact of Harlem on Matisse’s approach to black models. (Though plausible, this, too, seemed circumstantial.) For these line drawings Matisse worked with the Haitian model and dancer Carmen Lahens, a collaboration captured in Hélène Adant’s stunning photographs of their studio sessions and displayed here in a digital slideshow.

A particularly potent junction opened the final section of “Posing Modernity,” when Matisse’s Danseuse créole (1951), a late cutout abstracting the figure of illustrious dancer Katherine Dunham, meets Romare Bearden’s Patchwork Quilt (1970), a collage featuring a prone woman in profile. Bearden’s work—whose dialogue with Olympia Murrell sketches in a wall text—begins to close the arc of the exhibition’s art historical lineage, in its full-on engagement with flatness and centering of the previously marginalized black body. The exhibition’s last gallery, populated with recent works by black women artists, including Ellen Gallagher and Elizabeth Colomba, finally flipped the script of the gendered and racialized artist-model relationship dominant in the preceding sections. Here, black women were agents of their own images in various mediums, processing the ongoing effects of primitivism and cultural imperialism imbricated with modernism’s aesthetic inheritance. While this section felt dispersed and at times superfluous, the historical aspects of “Posing Modernity” served as a timely corrective to the undervisibility of black women in the annals of early modernism. In tracing their indelible entanglements with that canon’s formative works, Murrell offered not a catalogue of omissions but a recalibration of an entrenched art historical genealogy.