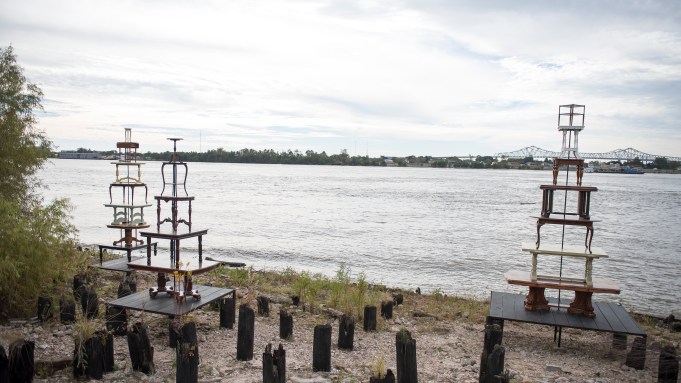 Biennials usually balance works from and about disparate places with site-specific projects and gestures toward local culture, often by local artists. As a site for such a show, New Orleans poses a particular problem, laden as it is with tradition and myth. It’s called North America’s most African city, its most European city, its most Caribbean city. It’s the “Gateway to the Americas.” It’s Catholic and carnivalesque. Its color could easily overwhelm the bland, flat globalism of the standard international exhibition. But curator Trevor Schoonmaker has risen to the challenge with Prospect.4, the current edition of the New Orleans triennial, titled “A Lotus Despite the Swamp.” With seventy-three artists and duos showing at seventeen venues, the show nods to both tourist-brochure boasts and the art world’s global purview in a way that invigorates them, by reanimating histories of trade and exploitation, fusion and exchange.

The hub of Prospect.4 is the Contemporary Arts Center, where the display opens with an impressive assortment of large-scale sculptures. Rina Banerjee, a Kolkata-born, New York–based artist, built a ghostly creature from beads, glass, and shimmering fabric. Winged, crimped textile constructions billow several feet behind the crouching figure, connected to it by gossamer threads. Lavar Munroe, a Bahamas-born artist living in Maryland, contributes Of the Omens He Had as He Entered His Own Village, and Other Incidents That Embellished and Gave a Colour to a Great History (2017), a tableau of a horse rearing as its rider lies cast off beside it. The mythic scene is made of strips of cardboard and brown tape and colorful bits of detritus: torn-open tennis balls, feathers, fake hair.

In the Prospect.4 catalogue, Schoonmaker and other contributors extol the New Orleans carnival tradition—especially the work of Darryl Montana, who paraded for years as Big Chief of the Yellow Pocahontas Tribe, one of the African American Mardi Gras krewes, in the lavishly feathered and rhinestone-encrusted costumes on display at the New Orleans Jazz Museum at the Old US Mint. But Montana is the only maker of vernacular local art in Prospect.4, and when I first entered the CAC I wondered if the gathering of far-flung works was meant to evoke the local via some sort of isomorphism. But Banerjee’s work, as a wall text describes, refers to the story of a marriage between a New Orleans black woman and a member of Louisiana’s “Black Bengali” community, and the list of materials identifies the figure’s mask as Yoruban and the rakes that are its arms as Indian. Munroe’s installation draws on the Bahamian carnival Junkanoo, an Afro-Caribbean cousin to Mardi Gras. Such works do more than flesh out a festive look—they draw on old connections related to New Orleans.

Works on the CAC’s second floor address migration and movement more explicitly. In Cauleen Smith’s video Egungun: Ancestor Can’t Find Me (2017), a figure shrouded in shells wanders zombielike in a lush African landscape. In Yoruban societies, egungun are costumed dancers who appear at public celebrations. Smith’s is more monstrous—an animated corpse of a slave-ship captive gone overboard during the Middle Passage that has now emerged as a haunting. Transferred from 16-mm film, the video has a grainy texture that enhances the barnacled cloth of the costume. Penelope Siopis’s installation World of Zulu (2017) features a collection of objects that traces the travel of “Zulu” as a brand, from South African souvenirs to sports-team paraphernalia. It also includes the hand-painted coconuts given to Mardi Gras revelers by the Zulu society, and a reel of found videos, playing on a monitor, has a shot of Louis Armstrong attired as King of the Zulu Social Aid and Pleasure Club (another Mardi Gras krewe) in 1949.

In his foreword to the catalogue, musicologist Ned Sublette details the layers of African influence in musical culture. I was intrigued, but ultimately disappointed, by his use of the term “chronotope.” In the 1937–38 essay that popularized the term, “Forms of Time and Chronotope in the Novel,” Mikhail Bakhtin used “chronotope” to describe the ways in which particular relationships between time and space define different literary genres; he also discussed the chronotope more broadly, as that which gives a place symbolic meaning that can then be harvested for art. Sublette applies the term to various places and cultural forms—Congo Square is a chronotope, jazz happens in a chronotope—without explanation or analysis, as if the intersection of time and space were remarkable in itself rather than a precondition of existence. His invocation of the term, however, helped me see how Schoonmaker tells a story of New Orleans by giving attention to sites where, as Bakhtin says of the road, “the unity of time and space markers is exhibited with exceptional precision and clarity.”

New Orleans gets the flavor of a European city from its public squares, where manicured gardens and paths frame monuments to historic leaders, organizing urban space and memory in an orderly manner. Several of the city’s monuments to Confederate generals came down in spring 2017. Now these squares rhyme with ones in Luanda, Angola, that are seen in Kiluanji Kia Henda’s photograph series “Redefining the Power III (Series 75 with Migeul Prince),” 2011. The images show Kia Henda’s friends seated on monumental plinths that have stood vacant since the overthrow of Portuguese rule. But the confrontation with missing figures captured in Kia Henda’s images suggests a fertile uncertainty, the openness of possibility in a chronotope of postcolonial public space.

Several works at Prospect explore the chronotope of the batture, the strip of land between river and levy that floods when the waters of the Mississippi Delta rise. New Orleans–based sculptor Jennifer Odem stacked tables in spindly towers along the riverfront at Crescent Park. For local viewers, these summon memories of Hurricane Katrina, when families built makeshift towers from furniture and placed photographs and other family treasures on top to keep them safe. Mark Dion built a marine biology research station in a wooden hut on the grassy, rolling lawn at Historic Algiers Point. Both works may well be partially submerged by the end of the triennial’s run: they speak to the precarity of a place whose borders move over time. A highlight of Prospect.4 is Jeff Whetstone’s “Batture Ritual” at UNO St. Claude Gallery, which documents and dramatizes the use of the marshy space in photographs and a meditative video. There’s an image of a gutted catfish studded with gemlike flies. Hazy pictures juxtaposing subsistence fishermen with ocean tankers have varied surface textures, resulting from the way moonbeams and the ships’ orange lights settled in Whetstone’s long exposures. This body of work conveys the spongy impermanence of the batture, pitching it as a spatial synecdoche of New Orleans, a city that absorbs the cultural traditions that its coastal location has opened it to.

If the international exhibition has a chronotope, it’s probably like that of the airport: a site of short-lived confluences, sudden and random proximities of people and things that soon return to their distant existences, where the abundance of crossing paths is more likely to produce a jet-lagged fatigue than meaningful connections. But for Prospect.4, Schoonmaker has mapped the artists’ themes and biographies onto paths of migration and influence, evoking historical exchange and common experience. He has redeemed a stale format by using it generate a network of common experiences of resilience across cultures—to produce a creative lotus in the biennial swamp.

This Free Password Manager Has Never Been Breached, Unlike Some of Their Biggest Competitors