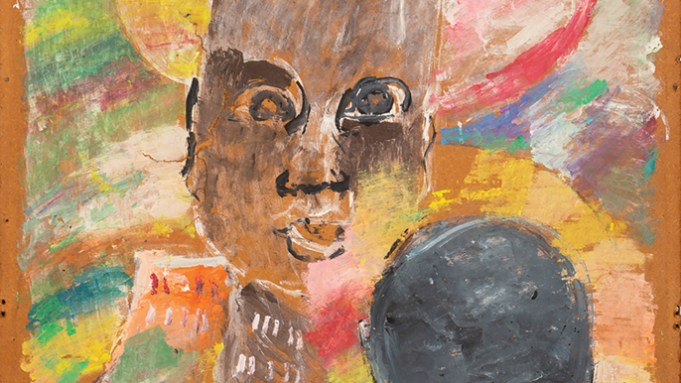 During his lifetime, self-taught Miami painter Purvis Young (1943–2010) was something of a legend in his city and gradually gained national prominence in the realm of “outsider art.” Extraordinarily prolific, he created sprawling murals in Miami’s historically black Overtown neighborhood, where he lived, in addition to making countless paintings in his studio, usually on found wood panels. His work generally consisted of figurative compositions that explored social issues and demonstrated a distinctive artistic style defined by squiggly brushstrokes and bold color combinations. Young, a high school dropout, began to paint while incarcerated in his teens for breaking and entering. From early on, his work conveyed a quest for freedom and alluded to his experiences as a black artist navigating a violent, segregated city and a disinterested, if not hostile, art world.

Since Young’s death, his reputation has grown significantly. His work—like that of a number of self-taught African American artists from the South, including Thornton Dial, Bessie Harvey, and Lonnie Holley—has lately transcended the outsider genre and been embraced by the art world. The recent exhibitions at James Fuentes and Salon 94 offered viewers a chance to survey Young’s achievements. (A retrospective of his work on view at the Rubell Family Collection/Contemporary Arts Foundation through June 29 gives Miami audiences an even greater opportunity to do so.) Young developed and refined his compelling visual language over the course of his career. His recurring imagery included crowd scenes, pregnant women, and haloed figures. In interviews, he often referred to his work as a form of protest art, and among the twenty major paintings at Salon 94 were several that portrayed crowds of people demonstrating in the streets. Each panel in the diptych Untitled (Protesters), ca. 1990s, features a group of schematic figures outlined in black. On the lefthand panel, two central figures are shown with their arms raised in the air; depicted below the crowd is a row of tenement buildings. In both panels, the subjects seem to vibrate in ethereal spaces—fiery red on the left and primarily greenish on the right—as is typical in Young’s work.

Young used his pregnant woman motif to convey hope for a better future. The baroque curves of the wooden frame on Untitled (Pregnant Woman in Green Frame), ca. 1985–87, echo the pregnant figure’s silhouette, highlighting the imminent birth. Young’s haloed figures represent people he saw as representing human ideals, whether anonymous citizens or famous people the artist rendered in portraits. A particularly captivating work employing this theme at Salon 94 was Untitled (Palm Sunday), 1996, in which golden haloes crown members of a crowd pictured amid an energetic field of zigzagging lines.

Haloes graced many of the figures in the works shown at James Fuentes. In an untitled painting from 1994, a bald haloed head fills the pictorial space. The left side of the composition displays a vertical column of people rendered as black lines, while the right one features a sequence of boats—another recurring motif in Young’s work, which he intended to refer to the struggles of immigrants seeking refuge and freedom in a new land. Figures with haloes also occupied two strikingly long, vertical paintings in the show. In the context of Young’s esoteric vision, such celestial beings represent the promise of renewal and redemption in a troubled world.