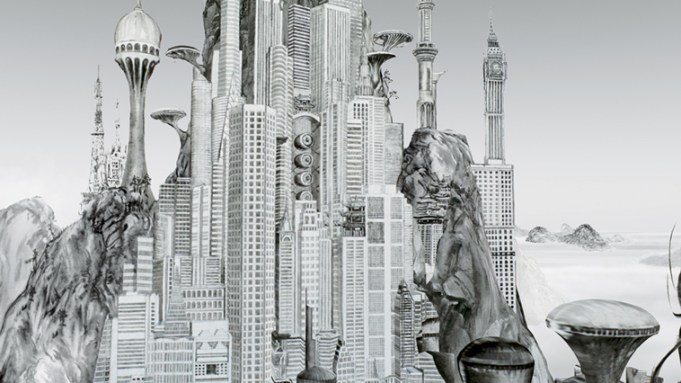 Qiu Anxiong works in various mediums but is perhaps best known for his animations that adopt the aesthetic of Chinese ink painting. His desire to turn traditional painting into moving images is at the same time a desire to defamiliarize video and critique contemporary realities through ancient sensibilities. Qiu’s exhibition at Boers-Li Gallery, his first solo show in New York, foregrounded this interplay between the past and the present.

At the heart of the exhibition was the thirty-minute-long New Classic of Mountains and Seas III (2013–17), the final segment of an animation trilogy that Qiu began in 2004 and titled after an ancient Chinese encyclopedia of mythological creatures and fantastic lands. Rivaling the breathtaking imagination of the original Classic, Qiu’s trilogy unfolds in surreal, black-and-white scenes portraying vast landscapes inhabited by mutant creatures. While these scenes emulate the delicate brushwork and translucent texture of traditional Chinese ink wash on paper, they were in fact rendered in acrylic on canvas. To make the animations, Qiu repeatedly reworked such paintings—including a selection displayed in the show—by erasing certain details and adding others, so that each could provide multiple frames.

New Classic of Mountains and Seas III continues the trilogy’s focus on the underside of human progress, and examines the spiritual and environmental perils of technology. The video opens in the clouds, to the moody wail of a Chinese horn. As the mist clears, we see the tops of buildings—ancient pavilions and modern high-rises, dilapidated and overgrown with vegetation. A figure who wears an air mask in the form of an octopus surveys these ruins, before diving to the world below.

In addition to the octopus-mask, other animal-object hybrids appear over the course of the video: a tortoise-car, a ram-motorcycle, a dragon-treadmill, a dinosaur-tractor. They move through a hellish cityscape—monolithic architecture, deserted streets, dense smog—in which human lives are relentlessly monitored and mediated through computer screens and VR headsets. If this techno-dystopian vision of contemporary life at times verges on facile pessimism, Qiu’s creature-machines enrich it with unexpected vitality and whimsy. The four woodblock prints on view, taken from a bestiary Qiu made in 2008, also depict such beasts and include texts describing them. The “mi-saier” (whose name is a phonetic equivalent of “missile”), for example, is described as a long, thin fish capable of flight, with no eyes but many fins, that destroys everything upon contact.

Though Qiu’s hybrids are often menacing, there is something marvelous about them: air masks with tentacles and motorcycles with snouts give a sense of technology as an imaginative exercise, while also conjuring an ancient time when technologies were more directly connected with the natural world than they are today. Reflecting on the impetus for the trilogy, Qiu once remarked: “I have set eyes on modern life’s ingenious inventions . . . as though I was a naive observer.” Through his “naive” eyes, Qiu allows us to glimpse a more organic version of technology, and perhaps to begin to discover a path out of technology’s totalizing reach.

This Roaster Is Brewing a $150 Cup of Coffee, but Only a Few Lucky People Will Be Able to Taste It