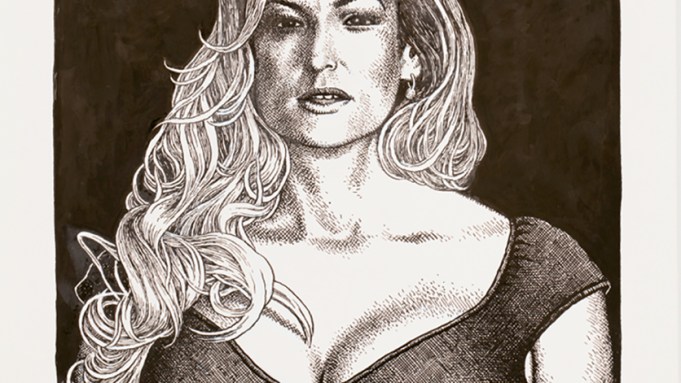 The color scheme of the R. Crumb exhibition that Robert Storr curated for David Zwirner deserves an award. The main gallery was painted a shrill yellow that seemed cheerful but sickly, like a banana about to rot. It would be hard to imagine a better way of displaying this artist’s jaunty, queasy comics—when he gets a paper cut, you could almost believe, he bleeds this yellow.

Bleeding seems like an apt metaphor for the nakedly confessional art of Robert Dennis Crumb (b. 1943), a man so obsessed with his own id that one of his comic books is actually called “Id.” Studying his seven decades of work for the printed page—as the exhibition, titled “Drawing for Print: Mind Fucks, Kultur Klashes, Pulp Fiction & Pulp Fact by the Illustrious R. Crumb” and stocked with hundreds of tear sheets and spreads, provided ample opportunity to do—means constantly readjusting your expectations. Dismiss him as a peddler of smut and he makes a case for himself as heir to William Hogarth, James Gillray, and Thomas Nast (works by all three hung near the entrance). Sentimentalize him as a lovable nerd-underdog and he disappoints you with sheer meanness. Wince at his political incorrectness and he turns out to be a savvy political satirist. Pronounce him a prophet and he drags you down the rabbit hole of his past. The keywords in the titles of Crumb’s comics sound like a glossary of the hang-ups that have fueled his career: “Self-Loathing,” “Flesh & Blood,” “Jiz,” “Despair” . . .

Crumb wallows in his neuroses. He distorts them and plays them for uneasy laughs until, paradoxically, they start to feel like a kind of mask, hiding something still more essential and unsettling. In “Footsy” (1987), an eight-page comic that chronicles his years of clueless flirting, all the classic Crumb motifs are present: teenage traumas; insecure males; Amazons with massive rear ends and legs, catalogued with a fetishist’s care. Yet all this attention to detail can seem like a consolation prize in the absence of real self-awareness. By the time we reach the anticlimactic ending of “Footsy,” we sense that not even Crumb knows why he does what he does. The same could be said for much of the other art in the show’s main gallery. Crumb can draw anything, remember anything, make a joke of anything—but, no matter how autobiographical he gets, he never explains himself.

The second, smaller gallery, painted a sleepy blue, contained some of Crumb’s more measured and less explicitly personal projects: illustrations for a Kafka biography, portraits of early twentieth-century bluegrass icons and decidedly twenty-first-century icons like Serena Williams and Stormy Daniels. Most of the works in this room were completed after 1991, when he settled in France with his wife, the artist Aline Kominsky-Crumb. By organizing the exhibition in this way, Storr seemed to suggest that Crumb mellowed with age. He stuck with the same sorts of subjects, but the harshly kinetic style he perfected in the ’60s gave way to graceful curves and delicate cross-hatching. His leer didn’t vanish, but it softened. In a recent interview he said he barely thinks about women anymore and draws them even less.

This gives his interpretation of Stormy Daniels, completed shortly before the show opened, a strange distinction. Crumb draws her surrounded by darkness, like Rembrandt in a late self-portrait, with one raised eyebrow and a sneer revealing tiny ratlike teeth. She’s attractive and repulsive, a sleazebag turned unlikely mainstream hero—the embodiment of everything this virtuosic, troubling artist has to say about America and, peculiarly enough, himself.