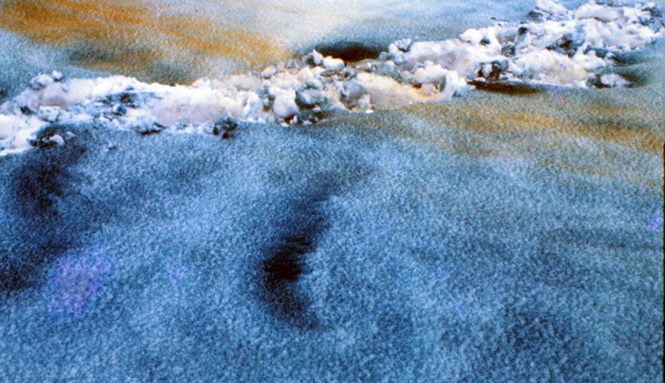 Organized by New York–based art historian and curator Reiko Tomii, “Radicalism in the Wilderness: Japanese Artists in the Global 1960s” surveys experiments with the dematerialization of the art object in the work of Matsuzawa Yutaka and the collectives GUN (Group Ultra Niigata) and The Play. Tomii structured the exhibition around notions of “connection” and “resonance”—which she developed in her 2016 book on the same subject—to offer an account of how these artists negotiated the local and the global.

Matsuzawa’s imaginary 1964 exhibition in the Nanashima highlands in central Japan demonstrates the radicality of these artists’ approach to art-making. Titled “Independent ’64 in the Wilderness,” the proposed exhibition riffed on a major artist-organized show that had recently opened at the Tokyo Metropolitan Art Museum and that some people saw as having compromised its critical aspirations. Tomii displays a photocopy of an advertisement for Matsuzawa’s show, which asked participants not to submit artworks but to deliver the works’ “formless emission” to the remote Nanashima site. The “wilderness” Matsuzawa invokes thus refers to parapsychological phenomena and modes of perception as well as to distance from Tokyo, which was considered the epicenter of Japanese modernism.

The section on Matsuzawa opens by tracing how he adapted elements of Buddhist philosophy and theories of the paranormal into modernist art practice. Early work from the late 1950s explores the concept of “psi” (psychic) powers, which he defined in a 1960 text as “cognitive abilities beyond fives sense such as precognition and clairvoyance.” Employing photography, collage, and screen-printing, and often incorporating fictional symbols inspired by ones used in physics and mathematics, his “Psi” works (ca. 1960–63) regularly feature motifs arranged in a three-by-three grid—a form common in Buddhist mandalas. Archival ephemera become increasingly important in the Matsuzawa section of the show, as his later practice sought to evacuate art’s material base along Buddhist principles of kannen, or “meditative visualization.”

Documentary and archival material dominates the sections on GUN and The Play. The collectives were founded in 1967, and were based far from Tokyo, in, respectively, Niigata Prefecture and Osaka. In Event to Change the Image of Snow (1970), presented here in a series of photographs shown on a large screen, four GUN members used pesticide sprayers loaded with pigment to paint a snowy riverbed in vivid blues, reds, and yellows. Their performative variation on Color Field painting was as visually arresting as it was ephemeral. The Play likewise conceived art in participatory terms in order to resist its commodification by the culture industry. Perhaps their most memorable work was the Thunder project, which they began in 1977 and which is represented here in detailed sketches, plans, and correspondence. The collective built a massive pyramid atop Mt. Jubu, south of Kyoto, out of logs. They mounted a copper lightning rod on top, and waited ten years—in vain—for lightning to strike. Exemplifying what Tomii calls “resonance,” or noncausal links between artistic practices across distant contexts, Thunder was initiated the same year that American artist Walter De Maria, sponsored by the Dia Art Foundation, oversaw the construction of The Lightning Field. In a wall text at the conclusion of Tomii’s exhibition, she notes that The Play’s members had learned of De Maria’s project and written to him in 1977, but received no response. The two works share formal and theoretical affinities yet remain profoundly distinct. The formalized protocols that guide viewings of The Lightning Field contrast with the open, chaotic viewing practices encouraged by The Play via posters, some of which are included in the show. Such highly localized, granular details of modernist practices beyond Tokyo, many of them being introduced to US audiences for the first time, enable the exhibition to counter notions of international contemporaneity that hew to a center-periphery framework.