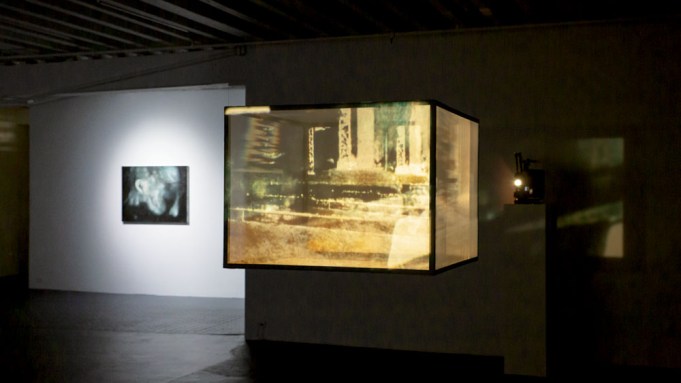 The films, drawings, and paintings in Raha Raissnia’s latest show at Miguel Abreu, “Galvanization,” interrogate the camera’s capacity to faithfully record subjects or to represent historical moments. Depicting details of photographic images in heavily abstracted form, the works stimulate historical material by reframing its particulars. Traces of architectural features and body parts appear amid densely matted textures or dissolve in palimpsests, the artist highlighting the rhythms and movements common to personal memory.

Much of Raissnia’s source material for the works came from a set of 35mm slides labeled “Sultanate Architecture” that was discarded by Brooklyn College. The images show the ruins of a fourteenth-century mosque. She also used other found slides and her own photographs. In her large-scale painted portrayals of the materials, the overall scenes are eschewed for dark alleyways, dirt roads, and ornament on facades. Shade (2018), for example, shows a shadowy, unmarked box in the middle of an otherwise vacant street. The source photo’s grain is meticulously represented in thick, tenebrous layers of paint. In some areas, the surface of the work is coated with shiny gelatin, somewhat warping the image underneath and providing a protective polish.

Alluvius (2018) is a suite of twelve mixed-medium drawings on paper hung in a floor-to-ceiling grid. Many of the compositions are bifurcated, as if showing side-by-side film cells snipped from the reel. Occasional fragments of bodies appear—a hand here, a face there. But when one steps back to see the work as a whole, it shape-shifts. The spatial connections between the drawings suddenly feel less informed by the filmic frame than they do by architecture: chiaroscuro renderings of interiors, bedrooms, and windows dominate the overall composition. Raissnia’s dense mark-making within her depictions of these spaces collapses surface and depth.

The installations Galvanoscope 1 and Galvanoscope 2 (Films A and B), both 2018, consist of 16mm films projected onto cubic, lampshade-like scrim structures suspended from the ceiling. The first installation features a single film. The second overlays two reels projected onto the cube from opposite sides of the room. The various projections in these installations switch rapidly between close-ups of ornate mosques, pans of unpaved roads, and slow sequences showing cloudless skies. The scrim structures, with their multiple mesh panels, divide the overlapping imagery at the same time that they flatten it. In Galvanoscope 2, the two three-minute, sepia-toned films projected onto the cube play on top of each other, their superimposition producing a flickering, layered picture of Iran. Each image in the footage lingers for a moment before dissolving into the strobing of light.

Although the images Raissnia used for the works in the show correspond to specific times and places, in her hands they become less coordinates for mapping historical narratives than they do generative, perceptual conduits for excavating, challenging, and reprocessing visual cultures. Raissnia does not simply present past events, but tests the ways in which we are trained to remember them.