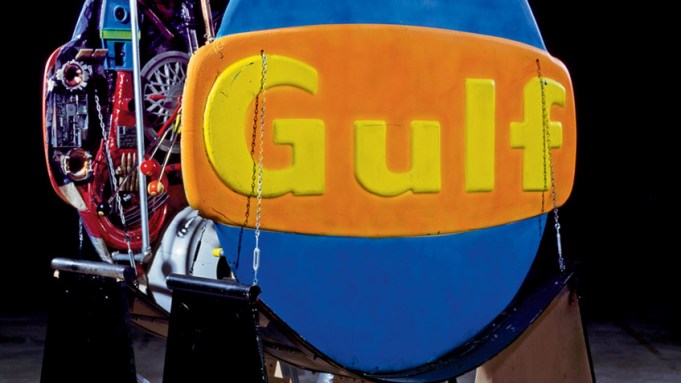 Rammellzee (1960–2010) was one of the major figures to emerge from the underground New York graffiti and hip-hop scene in the late 1970s and early ’80s. His work attracted the attention of European collectors and curators but is less well known in the United States, especially compared to that of contemporaries such as Keith Haring and Jean-Michel Basquiat. Rammellzee’s contribution to the art of the period, however, is vital. A painter, sculptor, performer, musician, writer, and self-proclaimed theoretician, he espoused what he called “Gothic Futurism”—a complicated set of principles that manifested in a visual style inspired by the elaborate calligraphy of Gothic monks and the machine imagery of Futurism.

The recent survey “Rammellzee: Racing for Thunder” filled all the galleries in Red Bull Arts’ Kunsthalle-like space and successfully conveyed the formidable achievements of this eccentric polymath. Organized by Red Bull chief curator Max Wolf, in collaboration with critic Carlo McCormick, the show included several dozen two-dimensional works and wall reliefs, as many sculptures, a handful of installations, and a film and video program featuring the artist’s performances, interviews, and cameos in movies like Charlie Ahearn’s 1982 Wild Style.

Born in Queens, New York, to an African American mother and an Italian father, Rammellzee (whose real name remains a closely guarded secret) began to hit the subways in the mid-1970s with his “wildstyle” graffiti tags. His work stood out from other graffiti for its seemingly effortless fluidity, intricate detail, and layers of patterning. His virtuosic draftsmanship soon garnered mainstream art-world attention. The early two-dimensional works on view here show how Rammellzee adapted his street compositions to more traditional art-gallery formats. Many of them, such as the pen-and-marker Maestro 2 Hyte Risk (1976–79) and Evolution of the World (1979), resemble schematic renderings of futuristic architecture.

Other works from this period, including the mixed-medium compositions The Only Way (1982) and Gothic Futurism Ikonoklast Panzerism Riddle Approach Reproach (1983), suggest cosmic maps of an imagined universe. In subsequent pieces, Rammellzee began to incorporate found objects like plastic toys and machine parts, often embedding them in layers of resin several inches thick. Works such as The Coming of Zee and Ransom Note of the Infinium Sirpiereule (both 1984) offer rich palimpsests of objects and imagery that correspond to Dada collage while elaborating and refining the artist’s cosmic vision. Rammellzee pursued this iconography throughout most of his career, employing Day-Glo colors and black light for works like Knotted Mind “Charleston” and Letter M Explosion (both 1991) to ever more theatrical effect.

In later years, Rammellzee grew disillusioned with the art world, feeling that his philosophical ambitions and revolutionary aims had been misunderstood and that his work was too readily packaged as that of a graffiti artist or rapper. In the large assemblage Gulf War (1994), one of the most overtly political works in the show, a metal Gulf gas station sign is fixed to a conglomeration of plastic fans and other detritus. The sculpture implies an ominous war machine in the service of the oil cartel.

War imagery and political themes were central to Rammellzee’s performances. Among the exhibition’s highlights were the many surprisingly well-preserved armorlike costumes for the performances he presented in local clubs or, at times, in his Tribeca loft space, which he called the Battle Station. These outrageous outfits often recall the look of the Transformers. In his live shows, Rammellzee, like those robotic creatures, seemed to mutate into a menacing being, attempting—as he frequently stated—to represent a force countering oppressive authority and the ever-expanding military-industrial complex.

One of the costumes on view, The Gasholeer (ca. 1987–98), features an assortment of fluorescent-painted plastic parts; pyrotechnic devices affixed to the arms, hands, and feet; and a freakish mask that appears to be from some sci-fi Kabuki drama. Rammellzee wore this costume in a performance I saw in the late 1980s. At the start of it, he lumbered into the audience. Earsplitting music he had composed filled the space, as flames and fireworks shot from his limbs and the crowd scrambled out of the way. Lasting barely two minutes, the performance was a bit terrifying and totally unforgettable. Even displayed as a static art object, the remarkable costume gives the sense of being faced with a provocative artist bent on disturbing the status quo.