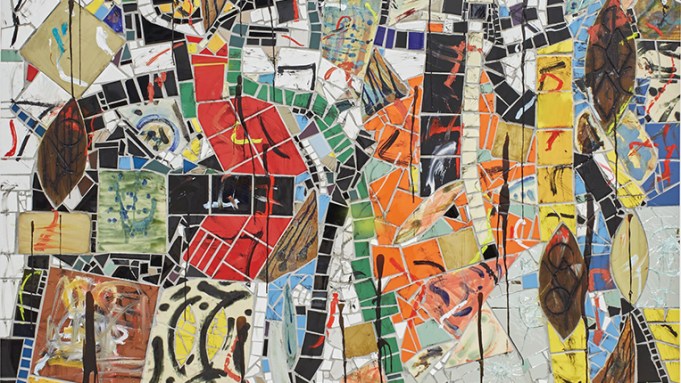 A few months ago, my niece drew a human face for the first time. She’s two years old and can barely hold a marker, but I knew immediately what she’d made. Two dots and a dash, and my brain, prepped by eons of evolution, did the rest. Something similar happened to me at “The Hikers,” Rashid Johnson’s recent exhibition at Hauser & Wirth. Faces jumped out of his collages and tile mosaics, whether I was looking for them or not. The more crudely sketched they were, the more unexpected and powerful was my twinge of recognition—more powerful, even, than seeing my own face in the intermittent ruined mirrors of his work.

That twinge was the exhibition’s crucial component. It kept Johnson’s recent pieces from projecting total despair and produced, instead, something more difficult and disturbing. The works are a grim successor to Johnson’s earlier “Anxious Men” series. Their names, taken together, sound like a slow, dirgeful chant: Untitled Broken Men, Portrait of a Broken Man, Standing Broken Men, Two Standing Broken Men. In Johnson’s emphasis on “man” and “men,” critics like the Guardian’s Nadja Sayej have detected a nod to the #MeToo movement. I sensed something closer in spirit to the midcentury alienation that inspired Herbert Marcuse’s One-Dimensional Man, Saul Bellow’s Dangling Man, and Ralph Ellison’s Invisible Man—i.e., “man” as a synonym for the whole wretched species, a usage as awkard and outdated as it is potent. The figures in Johnson’s mosaics have little individuality, let alone gender: around their jagged mouths and blank, oval eyes lie wastelands of wax, shattered tile and glass, bronze, black soap, and enamel.

At Art Basel, Hauser & Wirth Reports Sale of Louise Bourgeois 'Spider' for $40 M., a Record for the Artist

On these unsteady surfaces, figures are not drawn so much as scratched into being. You can feel Dubuffet and Guston in the thickness and deliberate gracelessness of the lines, but there’s no sense of childish play, not even Guston’s sardonic version. Johnson’s figures suggest no lost innocence or history of any kind; they’ve always been trapped here. To call these broken men untitled is a sick joke: they’re without property or proper name, outside of civilization, alien, invisible.

“A stand-in for the human condition,” as their creator described them to Sayej. And especially, it is tempting to add, for the black condition. Johnson, who grew up on the South Side of Chicago, insists that he isn’t trying to “race” his newest works, a statement which perhaps needs some qualifying. Blackness is there, to be sure, but as an implication more than a premise; it’s too elusive to be assumed at the outset. Even when a seemingly obvious signifier shows up, some second meaning complicates the first. The images of cowries and bantu masks in Johnson’s collages, for instance, are symbols of black community and estrangement at once: they evoke racial solidarity but also the distant lands his family couldn’t afford to visit while he was growing up. All three works featuring these motifs bear the same title: Untitled Escape Collage.

Johnson’s compositions are chaotic, yet they’re also carefully arranged, models of balance and classical symmetry. For someone who specializes in brokenness, he can be a remarkably lucid, tidy image-maker. In his recent work, the chaos is arranged more tidily than ever, with all the tension this contradiction implies. Sometimes, it’s too much. In Native Son, the Richard Wright adaptation he directed for HBO last year, the violence was dismayingly smooth, Steadicam-smothered à la Steve McQueen. When the tension pays off, however, it inspires transcendent work like The Hikers, the 16mm short that served as the show’s centerpiece. For seven minutes, two masked black men dance across the mountains of Colorado. When they finally meet, lock bodies, and remove their disguises, the encounter is intimate and unsettling in the right proportions. Even in the middle of nowhere they’re being watched, the knots and broken bark of the aspen trees around them forming a mob of pale, unreadable faces.

This article appears under the title “Rashid Johnson” in the March 2020 issue, p. 79.