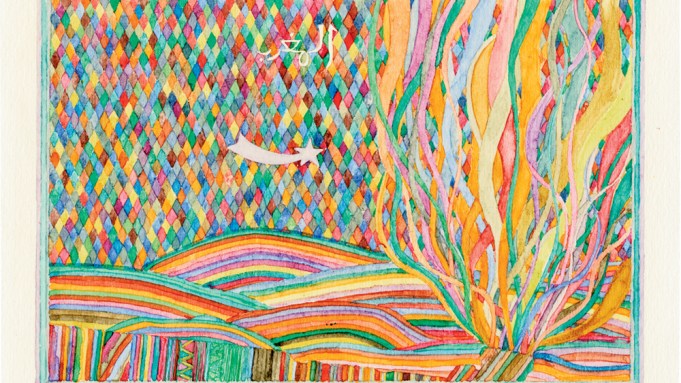 This exhibition surveyed two decades of Raul Guerrero’s practice, spanning from the work he made as part of the conceptual scene in Los Angeles after graduating from the Chouinard Art Institute in 1970 to the paintings he produced once he returned to his hometown of San Diego in 1980. The various projects on view were quite different from one another in certain respects, but they shared a common approach: within a specific set of formal parameters, each combined aspects of seemingly different cultures or visual modes and appropriated aesthetic or cultural clichés, as if to test whether they could be repurposed to tell us something new, often with regard to the nature of identity.

The earliest works were five small watercolors Guerrero created in Morocco in 1971 that feature well-worn motifs like a shooting star, a Moroccan tea kettle, and a veiled woman amid hypnotic patterns of rainbow-colored bands—the compositions merging Paul Klee’s Orientalism with a psychedelic aesthetic reminiscent of the era’s graphic art. This series was atypical in that the rest of the 1970s work on view comprised photos, videos, and sculptures. Cup and Whistling Pot (1974) is a soft-focus advertisement-like photograph of a disposable foam cup of steaming coffee beside an Andean double-barreled whistling pot. Both items represent typical Latin American products that have deep historical roots, with coffee being a major export of the region and signifying a web of cultural inheritances that leads back via France to Holland, Arabia, and Ethiopia, and whistling pots having been made for two thousand years by various Indigenous peoples in the area of Peru prior to its colonization by Spain in the sixteenth century. Guerrero’s photograph suggests a kind of self-portrait of the young California artist exploring his own tangled roots while navigating the signs of contemporary culture.

In a 1994 interview, Guerrero, speaking in Spanish, claimed, “I’m technically American, biologically Mexican, and culturally both, or neither.” His lineage includes Yaqui and Tarahumara ancestry, and in interviews he frequently brings up his experiences of being both an insider and an outsider. When, as a child, for instance, he visited Tijuana with his Mexican-American family, they were scorned for their American dollars and car. His constant awareness of cultural hybridity informs his many projects. A quartet of photograms from 1973 shows hands making gestures for Spanish curse words, which are written alongside the fingers. The images nod equally to Moholy-Nagy’s photograms and to 1970s work by artists like those in the Chicano collective Asco.

The large oils Guerrero began painting in the mid-1980s evoke such lowbrow modes as restaurant murals and tourism-board imagery. Desire (1985) juxtaposes a naked Indigenous woman with the Venus de Milo, both softly shaded, the warm terra-cotta-hued skin of one contrasting with the icy blue marble of the other. Fronds of a giant monstera plant seem to have floated in from a Nice-period Matisse, while, in the background, a painting showing a rooster perched amid Classical ruins suggests a late de Chirico. In The Pool of Palenque (1985), the head of the seventh-century Maya king K’inich Janaab Pakal floats in front of a Disney-esque waterfall, the cartoon quality shared by the butterflies fluttering around the head and by the frog and plant spotlit in the foreground. The imagery is at once dopey and grand, which seems to be the point: Guerrero recognizes that histories and myths are generally known today through pop cultural sources, and appears determined to show that even commercial schmaltz can provide a genuine sense of historical awe.

Although Guerrero, who is seventy-three, has had a long exhibition history on the West Coast, this was only his second solo show in New York. (The first was in 1984.) It came at an opportune moment: artists wrestling with multiple inheritances and making what Luis Camnitzer called “Spanglish art” are increasingly visible, and there’s a palpable hunger among younger figures to find precursors whose work has dealt with cross-cultural identity. Like much of the best art from Southern California, Guerrero’s combines a playful, deceptively low-key manner with an intellectual approach and an understanding that we must contend with the trite tropes of mass culture if we’re to gain any real sense of ourselves.