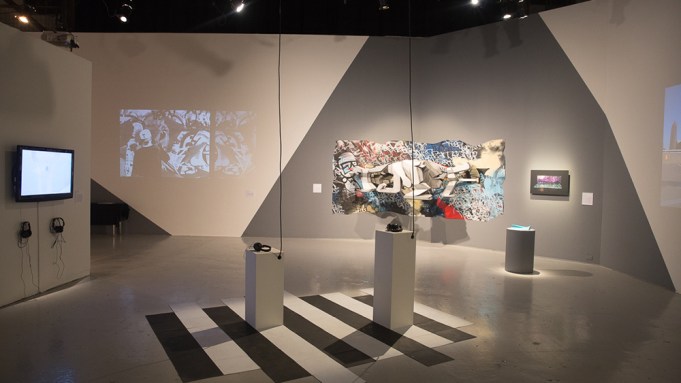 Exhibitions devoted to access technology often feel like trade shows. Even groundbreaking and progressive institutional exhibitions such as “Access+Ability” at New York’s Cooper Hewitt Smithsonian Design Museum in 2018 tend to focus on projects that treat disability a problem for technology to solve, with updated designs of prosthetics and assistive devices. Instead, “Recoding CripTech,” on view at SOMArts in San Francisco through February 25, focuses on artists’ critical takes on access technology, highlighting the creativity engendered by access needs. The show doesn’t present corrective mechanisms that allow disabled people to conform to normative standards. Instead, the curators liken disability culture’s reclamation of the term “crip” to the ways artists hack and repurpose technology to more accessible and inclusive ends. Access is not only a theme of the works by the twelve artists and collectives, but also a principle of curators Vanessa Chang and Lindsey D. Felt’s exhibition design: the show practices what it preaches.

How Museums Are Making Artworks Accessible to Blind People Online

Shannon Finnegan and Aimi Hamraie on Accessibility as a Shared Responsibility

TEMPT (2011–20) is a monumental sculpture of 3D letters that Tony “TEMPT” Quan, a Los Angeles–based graffiti artist paralyzed by Amyotrophic Lateral Sclerosis (ALS), created using eye-tracking technology and modeling software. Quan first designed the sculpture, which takes the form of his trademark TEMPT tag, using a program called Eyewriter through a Playstation camera that he hacked. Collaborators Sam Flores and Ronnie Buders then fabricated Quan’s design in foam and cinderblock. The sculpture is on view alongside a single-channel video that shows how Quan made the piece on display. The installation highlights how an artist’s customization of technology is a creative practice in its own right.

Many projects in “Recoding CripTech” can be accessed using multiple senses. Wall text recommends touching Jennifer Justice’s haptic sculpture The foot knows the foot when it touches the earth (2019), a set of wooden pallets covered in faux moss and lichen that are studded with three-dimensional models of animal tracks. The entire sculpture vibrates and shakes at regular intervals while playing sounds that mimic human footsteps.

In other instances, the curators worked with the artists to provide paraphernalia that translated their work across senses or between mediums. This includes samples of materials used in many of the sculptures and installations offered for tactile engagement, as with two related pieces designed for dancers who use wheelchairs. A photograph and a 3D-printed prototype offered for tactile study accompanied TeamRAMP’s The Ramp (2017), a two-level stage, elegantly connected by a gently sloping ramp that facilitates wheelchair movement. It was shown next to Kinetic Light’s Revel in Your Body (2018), a single-channel video that shows a wheelchair dance duet filmed on the rooftop of an empty parking garage. The show also boasts tactile maps, braille exhibition information, and audio guides with visual description alongside the artworks.

Perhaps the most moving work in the show is the series “Crip Couture” (2011–) by Chun-Shan (Sandie) Yi. Yi’s handmade accessories are shown alongside photographs of them being worn by the artist and her crip kin. The works render the disabled and queer body as a site of extreme tenderness, and highlight technology’s role in the art of customized care. Yi’s organic forms and use of latex evoke the Post-Minimalism of Eva Hesse, but take the form of underwear, shoes, and gloves: the latter titled Em-Brace (2011) after an intimate gesture. Designs like Dermis Footwear (2011), a pair of shoes sewn from latex casts of scarred skin, highlight bodily difference rather than erase it. Yi’s wearables undermine the notion of prosthetics or orthotics as devices to make the disabled body conform.

Yi’s wearables join several works in the show that consider the intersections of crip and queer experience. In his 2006 book Crip Theory, Robert McRuer argued that the figure of the crip shared affinities with that of the queer: both belong to groups have both been pathologized, both have reclaimed slurs as terms of empowerment, and both can experience rituals like coming out or “passing.” Curators Chang and Felt show how the reclamation of crip identity impacts artists today, while highlighting the central role of technology in art by disabled people. The exhibition is thus both a lab for reimagining more accessible interfaces in exhibition design, and a curatorial argument about technology and identity, highlighting how hacking plays a vital role in crip culture.

One key to the show’s success is that it eschews flashy technologies that make grandiose promises, instead addressing the mundane technologies all around us—which some of us have the privilege of not noticing at all. Sara Hendren’s Infrastructure Song (2019), a single-channel sound piece that plays on headphones, layers audio sampled from crosswalk signals designed as wayfinding devices for blind and low vision people. Beeps, chirps, and tones combine with the sounds of cars driving by to create an overwhelming orchestral soundscape that is dissonant and soothing in equal measure. The work raises evocative questions about the cues that move us through designed spaces. How have we been conditioned to tune out unspectacular technologies that are integral to keeping certain people safe? And whose bodies are still not safe? Hendren’s gesture, like many works in the show, recasts crip technological innovation as a creative practice.