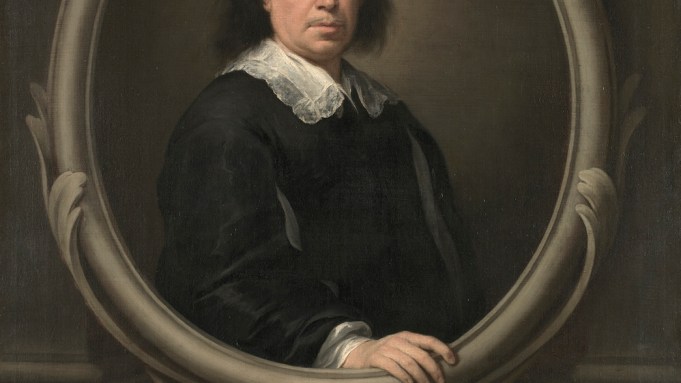 The Frick Collection, New York, conceived by Gilded Age industrialist Henry Clay Frick, recently hosted two exhibitions featuring painters from Spain’s Golden Age. “Zurbarán’s Jacob and His Twelve Sons: Paintings from Auckland Castle,” on view through April 22, is centered around a series of thirteen paintings, based on a story from the Book of Genesis, by Francisco de Zurbarán (1598-1664). “Murillo: The Self-Portraits,” which closed at the Frick on February 11 and is now at the National Gallery, London, marks the four-hundredth anniversary of the birth of Bartolomé Esteban Murillo (1617-82).

Here’s the surprise: neither show features famed masterpieces. The exhibitions instead draw attention to divergent aspects of these artists. Zurbarán, a religiously minded painter, is best known for restrained and austere renderings of monks. But the works on display showcase his ability to revel in material textures, especially that of patterned fabric. Murillo, whose star in Spain rose roughly as Zurbarán’s dimmed, was celebrated for soft-focus paintings of street urchins and the Virgin Mary and child, works which today seem so prettified as to be positively syrupy. In his naturalistic self-portraits, however, he reveals a somber side.

The exhibitions add new dimensions to our knowledge of both artists, showing how history impinged on their work. In Zurbarán’s case, we see how a dramatic fall in ecclesiastical commissions led him to turn to the New World for patronage, and adapt his style to his new audience. Murillo’s portraits of living subjects, on the other hand, reveal his talent for unembellished naturalism—an avenue he pursued infrequently because his religious paintings were in such high demand.

Zurbarán, who worked in Seville for most of his career, was called the “Spanish Caravaggio” for his mastery of chiaroscuro. In works such as The Martyrdom of Saint Serapion (1628), he created the illusion of raking beams of light by contrasting a carefully lit face against a dark background. His gift for making saints seem both human and divine, which the Serapion painting hauntingly conveys, won him many ecclesiastical commissions in the 1620s and 1630s. But demand for such work fell sharply in the 1640s, as Seville suffered an economic decline. As a result, Zurbarán turned to the Spanish colonies for patronage (and even, at a low point, had to sell his fine marten paintbrushes). It was during this period, between 1640 and 1645, that he made his Jacob series; it’s thought that he received the commission from a patron in Latin America.

The paintings are based on Genesis 49, in which Jacob, on his deathbed, calls together his twelve sons, the future progenitors of the tribes of Israel. At the gathering, he bestowed on each a blessing, which foretold their destinies and those of their tribes. Zurbarán depicts the patriarch and his sons in a series of six-and-a-half-foot-tall portraits, which are hung in sequence, from oldest son to youngest, in the long, rectangular East Gallery of the Frick.

In general, the canvases have more narrative and picturesque interest than spiritual power. Zurbarán’s Abrahamic patriarchs comically dwarf the generic landscapes he has placed them against and they lack the compelling, almost mystical, presence that infuses his famous monks. At best, their bearing illustrates their destinies. Judah, for example, stands straight as a pillar, his crown and regal attire reflecting Jacob’s prophecy that “the scepter shall not depart from Judah.”

But pleasure is to be found elsewhere. Jacob’s sons are dressed to the hilt, sporting furs, turbans, crowns, ornately brocaded tunics, and slippers and pants enlivened by jaunty bows and tassels. Zurbarán exercises his virtuosic ability to render the textures of these fabrics. He also takes obvious pleasure in painting a variety of bright colors (a departure from his habit of depicting monks’ robes in a restrained chromatic range of white, off-white, brown, or black). For example, the plump folds in Joseph’s green scarf seem three-dimensional, while its border of delicate gold threads harmonizes with a gold brooch and fancy gold-and-silver belt. Obviously, as a boy, Zurbarán absorbed much from his father, who was a haberdasher.

If Zurbarán produced the series for export as his fortunes were falling, the taste for Bartolomé Esteban Murillo, his fellow Sevillian, was on the rise. The Great Plague of Seville (1647-52) wiped out from one quarter to one half of the city’s population. In its aftermath, the church sought consoling rather than challenging images to comfort the faithful. Murillo’s style—his delicate brushstrokes, predilection for amber light, and, above all, the softly blurred (or “vaporous”) forms of his Immaculatas—made him an ideal artist to represent the revitalized Catholic faith.

At a high-point, in 1779, Murillo’s paintings were so popular in Europe that King Charles III banned their export from Spain, fearing that none would remain. But by the late nineteenth century, “Murillo Mania” had faded. The death knell for his reputation sounded in the early twentieth century when his sensibility was disparaged as sentimental and retrograde.

In recent years, there has been an attempt to revive Murillo’s reputation, with the Dulwich Picture Gallery near London hosting a major show in 2013. Between November 2017 and December 2018, Seville will honor his quadricentennial with an array of programs.

“Murillo: The Self-Portraits,” currently on display in London, is unusual for focusing primarily on the artist’s portraits and self-portraits, which are little known compared to his devotional images. It is a wise curatorial decision, since in these works Murillo emphasizes truth rather than treacle, painting with a subdued naturalism.

The portraits depict an array of Sevillian aristocrats, all clad in black garments with white collars. Some are framed as vignettes, such as Nicolás Omazur (1672), in which Murillo’s eponymous patron holds a skull. Others, like Juan Arias de Saavedra (1650), feature a more complex trompe l’oeil framing device involving a simulated stone frame and sculpted putti holding a coat of arms above the half-length portrait.

Two self-portraits show Murillo considering his own legacy. In the first, made sometime between 1650 and 1655, he embeds an image of his face in a niche of an illusionistically rendered stone slab that resembles a chipped tombstone. The later self-portait, finished in 1670, features a fictive stone frame adorned with carved foliage, which is placed on a stone plinth beside a half-rolled sheet of paper, a palette, and paintbrushes. Murillo, then in his fifties, looks out the frame, his face world-weary, with a soft jawline, receding hair, and thin gray moustache (all unsentimentally rendered). In a complication of the trompe l’oeil, his hand extends out to rest on the stone frame, as if about to lift a paintbrush.

In addition to the paintings, the show includes framed engravings and prints in books made by later artists based on Murillo’s self-portraits. His image was widely disseminated, indicating how revered he was. On the four hundredth anniversary of his birth, perhaps it is time we look at him again.