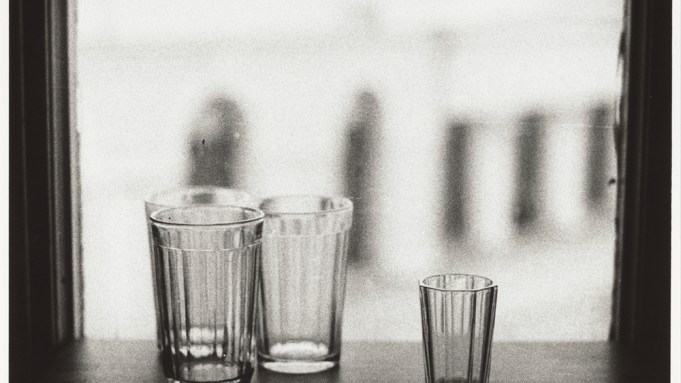 Anna Daučíková’s exhibition at KW was largely devoted to photo- and video-based works from the late 1980s to the present that explore the Slovakian artist’s queer identity. After graduating from the Academy of Fine Arts in Bratislava in 1978, Daučiková followed her then-girlfriend to Moscow and began working as a glassblower and taking photographs. As a transgender lesbian in the Soviet Union, where homosexuality was criminalized and both gender and artistic expression highly regulated, she did not intend for these works to be publicly exhibited. Instead, she conceived of them as private experiments, using a heavily coded vocabulary to play with gender roles. One example in the show was Family Album (1988), first exhibited in 2017. To the uninitiated, it looks simply like four black-and-white photographs of drinking glasses. However, the glasses are arranged in groupings intended to model various possible family structures. In one image, two glasses of different heights represent a heterosexual couple; in another shot of two glasses, one rests on its side, its height and thus “gender” remaining ambiguous.

Most of the other works on view were made after Daučiková returned to Bratislava in the early 1990s, following the collapse of the Soviet Union. There, she began creating performance-based video works alongside her photographs, and cofounded the feminist journal Aspekt. A recurring motif in these works is the interaction between glass and the body, with the artist treating the frictions produced by their contact as potential sources of dysphoria and pleasure alike. In the stunning black-and-white photographs comprising the series “Upbringing by Exercise” (1996), displayed at the exhibition’s entrance, the artist presses her breasts up against a sheet of glass in order to flatten them. Another work, the video Queen’s Finger (1998), shows a close-up of the artist’s hands rubbing a drinking glass as she washes it in repeated, circular motions, eliciting an erotic charge as well as awkward squeaks. In the video We Care for Your Eyes II (2002), Daučiková is seen slowly dancing in a room with her fly unzipped. A mirror is placed behind her zipper, obscuring a view of her genitals and thwarting invasive attempts to identify her biological sex. It also recalls the wearable reflective surfaces in her early jewelry works, which Daučiková made as a student. A selection of six examples (1977–78), housed in a vitrine, included large, rectangular pins and pendants consisting of reflective planes of glass and steel. One pendant has a concave glass piece resembling a camera lens.

The exhibition’s final room housed the newly commissioned three-channel video installation Expedition of Four Hands and Accompaniment (2019). The center channel offers a view of a cave overlaid with drawings of hands illustrating poses from Caucasian folk dances. The two flanking channels each show a pair of aging hands: one cutting glass, and the other bearing painted nails and folding women’s clothes. This juxtaposition at once set up and called into question a gender binary: according to the gallery booklet, the hands cutting glass belong to Daučíková, and the nail-polished ones to a man. Accompanying the projections was an array of glass panels engraved with text—poetic musings about bodies, references to the work of Judith Butler, and a tally of trans people attacked and murdered since 2000—placed on the floor throughout the room, along with a takeaway newsprint publication dedicated to Greek drag queen and HIV activist Zak Kostopoulos (Zackie Oh), who was murdered by police officers in Athens last year. The installation, Daučiková’s largest work to date, represents a distinct formal and conceptual departure from her early, privately oriented work: adopting an explicitly public mode of address, it frames expressions of gender and sexuality as political acts as much as personal ones.