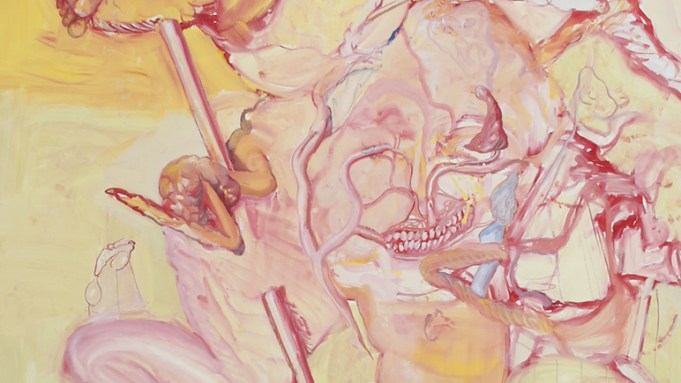 A wash of pastel pinks and yellows greeted visitors to Seoul-based painter Keunmin Lee’s solo exhibition at Shin Gallery, “Redefining the Undefined.” The soft palette was somewhat deceptive. The seven oil paintings on view, all made this year, feature layered compositions that gradually reveal unsettling imagery: disparate body parts reconfigured into amorphous mounds of organic tissue that recall otherworldly entities as much as they do human anatomy. In his work, Lee (b. 1982) depicts hallucinations he experienced around 2001, when he was diagnosed with borderline personality disorder. At the time, he was enrolled in a BFA program at Seoul National University. He stopped his studies and focused on treatment for the next two years, after which he resumed his education. While he has not hallucinated since he began receiving proper treatment, his memories of the visions remain vivid.

Three relatively small paintings opened the show. Organic Plate appears to portray inner workings of the human body, though, as its title suggests, the presentation of rosy tissue and glossy red arteries also recalls a culinary dish. The jarring suggestion is that illness consumes from the inside out. In Media System, Lee demonstrates his skillful draftsmanship, carving fine details, such as the tiny features on a pair of yellow heads impaled on a figure’s upraised arms, in pencil. The third small painting, Dialogue, shows two upside-down heads—one of them pushed into the stomach of a silhouetted red figure on the composition’s right-hand side, and the other shown on the left in larger form—connected to each other through tubes penetrating their mouths.

The remaining four paintings in the show were monumental and shared the title Refining Hallucinations. These works at first appear to depict indistinguishable heaps of organs, but specific features emerge as the viewer continues to look. In one painting, the central form has discernible limbs and a grin surrounded by an arrangement of arteries approximating a face. Another—forgoing the rosier hues of the other paintings for a palette of yellow, black, and gray—includes a schematic rendering of a cylindrical object laid atop a depiction of a brain placed on a rectilinear platform beside a cut-open head. The imagery seems to allude to connections between attempts in the visual arts and the sciences to understand the human mind, but also, more specifically, evokes the history of doctors performing horrific experiments on the mentally ill under the auspices of medical advancement.

The exhibition’s title suggested the difficulty of describing mental health issues adequately, whether on the part of medical professionals or people afflicted with such conditions. Lee defines aspects of his own disorder by turning the hallucinations that once plagued him into artwork. His creatural forms, tortured as they may seem, are rendered with compassion, and indeed have a kind of beauty. Just as there can be solace in receiving a diagnosis, there is comfort in depicting the intangible.