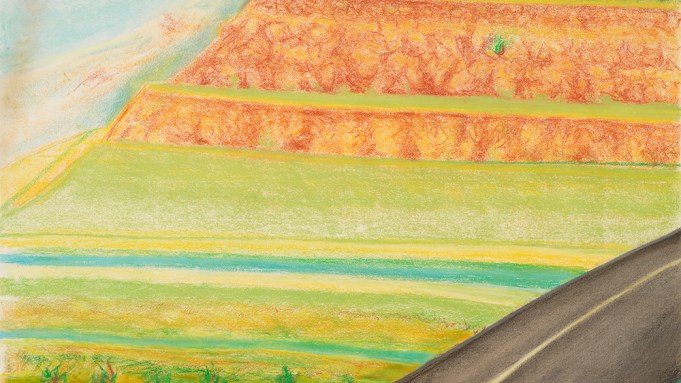 Sprüth Magers’s Richard Artschwager exhibition, “New Mexico,” on view through June 30 at the gallery’s location in Berlin (where businesses began reopening late last month), features an assortment of pastel drawings that bring viewers along for a ride through the plains of the state where the artist spent his teenage years. Artschwager lived in New York City and its surroundings for most of his career, and made these drawings in the decade before his death, in 2013. All landscapes except for one still life—Bowl of Apples (2007), a pit stop, perhaps—the works are an understated, rarely seen coda to his adventurous and challenging output, which traversed painting, furniture design, and sculpture and rubbed up against the fields of Minimalism, Conceptual art, and Pop.

Throughout his work, Artschwager favored the tactile, and these drawings, despite the luminous, airy qualities of their imagery, are no exception. You sense the weight of his hand in the application of the pastel, which he laid down in deliberate marks that he left alone in some places and rubbed out to create hazy sfumato effects in others, such as the ocher and emerald fields in Bushes with Blue Sky (2011), where sporadic blurring evokes heat’s optical distortions. The coarse paper that serves as the drawings’ support participates just as actively in the images’ making as the hand does, the fibers breaking up the marks and giving the clear New Mexican air an irregular texture. In this way, the paper calls to mind Celotex—the compressed, industrial fiberboard that Artschwager began using as a painting support in the 1960s and whose pockmarked surface would weave itself into his images, lending them a certain eeriness. About Celotex, he once explained: “One could say it is paper on a grand scale, large in format and with a coarse tooth, looking something like newsprint under magnification.”

But while certain qualities of the New Mexico drawings recall Artschwager’s other work, there are also departures—most notably, in terms of color. The drawings venture into a fuller palette than one is used to with Artschwager’s works, which, though sometimes bearing pops of color, are often dominated by neutrals—the grays of his acrylic paintings that transpose black-and-white photographs, for example, or the faux-wood tones of the Formica he incorporated into his most iconic sculptures. The palette here, by contrast, cycles through greens, grays, golds, and cerulean, and even plunges into a deep, moody ultramarine in the depiction of a night sky in Reflection (2010), a drawing on velvet. Artschwager generally used the pastels’ colors in unmodulated form, though at times he laid them atop gray or brown tones that unsettle or intensify the hues.

One wall displays a sequence of six drawings composed of stacked horizontal fields of color that suggest plains receding into the distance, some with grids of planted shrubs. These works have a panning quality to them, making the experience of the group nearly filmic, an effect enhanced by the graininess the paper provides.

Back home, I pulled out my copy of Agnes Martin’s collected writings to see what one of New Mexico’s most famous modernist residents (and proponents of the grid) might have had to say about the qualities of that landscape. I landed on a 1972 text (based on notes for a lecture), in which Martin shares an insight concerning the plains:

the plain had it

When I draw horizontals

you see this big plane and you have certain feelings like

you’re expanding over the plane

Although influenced by the New Mexican plains, Martin did not aim to depict them. She wanted to distill their qualities, as seen in her shift from “plain” to “plane,” from geography to geometry, in the passage above. “Anything can be painted without representation,” she asserts a few lines further down the page.

While Martin courted a sense of transcendence at the outer limits of painting, Artschwager reveled in the messy, contaminated spaces between categories. In the aforementioned sequence of horizontally structured drawings, he, at once, depicted the New Mexican landscape, collapsed and abstracted that space, and motioned toward film. Unlike Martin, Artschwager did not make works “without representation,” but, instead, showed representation to be permeable to many other ways of seeing. That kind of fluidity, never forced but simply given in these drawings, carries its own kind of transcendence.