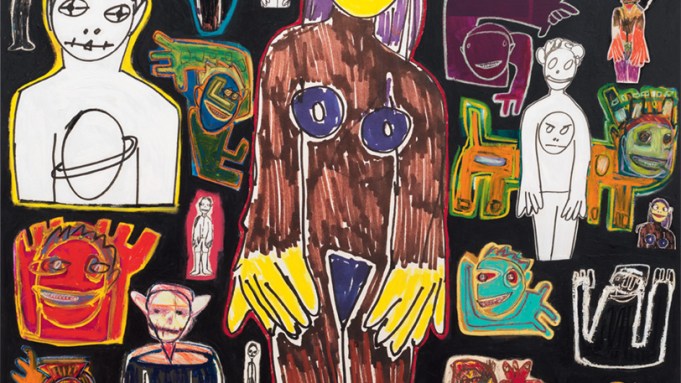 There was an ecclesiastical air about “High Times,” Richard Prince’s latest show at Gagosian. Some of the thirty-plus recent works recalled giant church frescoes: spanning from floor to ceiling, they featured stacked rows of figures, set off by areas of black. Walking through the gallery, you could see faces and gestures repeat, like those of saints. But there’s nothing lofty about the figures, or the collage techniques that patch them together. Scanned, cut, or copied from Prince’s sketchbooks, they are stick-limbed people: various grinning dudes, goofy and drugged; a cross-eyed, bikini-clad bimbo; a long-haired girl with dazed dot eyes and a straight-line mouth. Their fingers, when they have hands at all, are huge sausages, and their hair is frequently a bunch of wonky spikes.

Prince used colored pencils and markers to draw his characters on paper. After the images were transferred to the canvas, he drew on them with oil sticks or amplified their colors with acrylics squeezed out of the tubes and smeared on the surfaces. Some of the scans are blown up so big that the figures become crystal caves of pixels. Viewing “High Times” led one on a dizzying search for the ground, for the seams joining the parts, for the places where the artist’s hand met the work of the inkjet printer. This quest provoked both belief and doubt regarding the idea of the “original.”

So, too, did the exhibition text. It was attributed to one Joan Katz, who was identified as a Prague-based journalist, but its cascade of compact paragraphs closely matched the style of the Bird Talk page on Prince’s website, where the artist shares his thoughts in the form of a digital notebook. The author of the “High Times” text, whoever he or she is, explains how the show culminated decades of work and pulled from sources including doodles Prince made in the early ’70s (before he became famous for rephotographing magazine ads), his colorful “Hippie Drawings” from the late ’90s, and his kids’ art. The handout also described a 2004 episode in which Prince turned copies of the catalogue for a Willem de Kooning show at the Los Angeles Museum of Contemporary Art into sketchbooks, riffing on the senior artist’s ghoulish, voluptuous women and flattening them in his “hippie” vernacular.

“High Times” was a great show, with a joyful mood and a formal playfulness that made it endlessly exciting to look at. In the two decades since the “Hippie Drawings” first appeared, though, Prince has put on some stinkers at Gagosian, applying 1970s appropriation strategies to contemporary images and digital media. In 2008 there was “Canal Zone,” which featured crude collages incorporating manipulated photographs of Rastafarians from a book by Patrick Cariou, who sued him. In 2014, he presented canvas prints of Instagram posts, many of them images of young female models, with his musings and catcalls recorded in the comments below. This prompted more complaints about the unauthorized use of other people’s pictures.

Only one work in “High Times” reused a photograph—an image of a druggy party in a forest where psychedelic banners stretch between the trees. Some of Prince’s drawn hippies are inserted among the photographed ones, and others dance on a sheer piece of silk that hangs over the canvas and flutters up when viewers pass by, adding a tender layer to the show’s play of flat planes. But the key concerns of “High Times” can be found in those earlier, inferior shows: subcultural self-expression, primitive mark-making, defacement, the circulation of images, the juncture of printing and painting. In those exhibitions, everything went in one direction, from the stolen material to the final works, and not much happened on the way. That’s why, in court and on blogs, Prince’s defenders had to put so much effort into telling us why this was art. No one has disputed the status of “High Times,” even though all the same unartful mechanics and cheats are there, not only because they have been applied to Prince’s own handiwork this time but because they multiply and overlap, ricocheting against each other in manic, artistic ecstasy.

New Exhibition Spotlights the Woman Behind the Schiaparelli Label