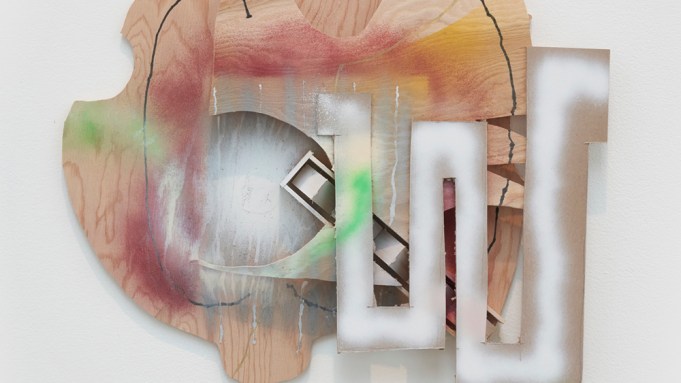 Richard Tuttle’s work is grounded not in a single aesthetic, but in a straightforward attitude concerning materiality. He allows metal wire, rope, corrugated cardboard, and unstretched canvas to do what they want to do—hang, fray, kink, and bend—and finds in these tendencies compelling lines and shadows that become part of the work. His career has spanned five decades now, and it’s tempting to consider him historicized. But Tuttle’s story continues to evolve, as seen recently in two concurrent exhibitions at Pace—one featuring his drawings from the 1970s and held the gallery’s new headquarters in Chelsea, and the other consisting of his latest assemblages and staged at the neighboring satellite space.

The ninety-four small-scale drawings comprising the former show were each titled basis, as the artist sees them as foundational to his practice. Rendered on sheets of sketchbook and notebook paper, the drawings feature simple, recurring geometric shapes: circles, triangles, half-moons. The physical characteristics of the paper itself—torn edges, rounded corners, the blue and red lines on the notebook pages—appear as essential to the works as Tuttle’s markings. The works hung on the walls in sequences that suggested lines of inquiry, so that visitors could view them as if flipping through a sketchbook and following the artist’s train of thought. This approach made for an engaging experience that might otherwise have been missing, since most of the drawings could not stand on their own. “Some of these drawings are works, even sculptures, in themselves,” he writes in the catalogue. “Some are visual thoughts or poems. Some are ideas to pursue. All are efforts to capture a fleeting moment in time, hold its value, and preserve it for a future use and moment.”

A lone wall sculpture, 8th Wood Slat (1974), punctuated the show, dividing drawings from the early ’70s from those made later in the decade. The wood frames on the latter were covered in gold leaf. Given the drawings’ delicacy and intimate size, the use of gold was a curious decision. It could be interpreted as preciousness—or, perhaps, a light joke on anyone who might accuse his work of having that quality.

The other exhibition, “Days, Muses and Stars,” featured eighteen wall reliefs (all 2019) in which layered curvilinear plywood shapes—recalling Picasso’s guitar assemblages or Elizabeth Murray’s shaped canvases—are topped with found materials, such as pieces of fabric, plastic netting, and a plastic container piled with spoons. Zigzag wood pieces resembling little staircases are incorporated into slices in the supports. All the color in these works comes by way of spray paint, and the diffuse hues beautifully accentuate the plywood’s grain. A smaller room contained miniature sculptures composed of wire, plastic, and other materials displayed on white shelves. The works’ titles—Pathos in a Void, Beet Greens, Yellow Brain Storm, etc.—were scrawled on the shelves’ edges: a rare moment of language entering a (sometimes comical) dialogue with physical forms in Tuttle’s work, which so often feels rooted in purely formal negotiations.

Tuttle made the assemblages this past summer at his new studio in Maine, where, as the gallery notes, he was in an “intense state of inspiration.” It shows. The works are not only beautiful, but unbridled and fun. As these two exhibitions demonstrated, this pioneering artist is still pioneering after half a century, and producing work that retains a restless energy.

This article appears under the title “Richard Tuttle” in the January 2020 issue, p. 78.