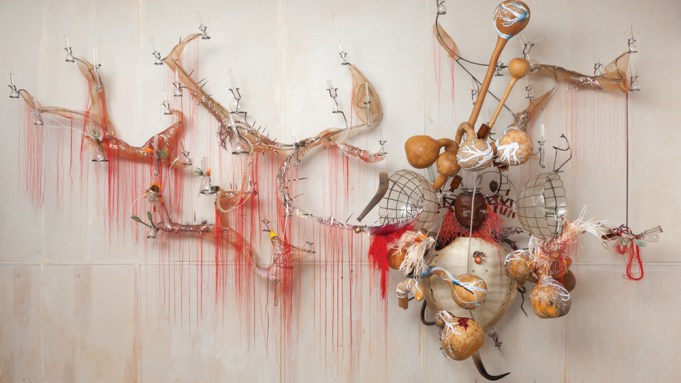 Rina Banerjee’s midcareer retrospective at the Pennsylvania Academy of the Fine Arts (PAFA), “Make Me a Summary of the World,” feels like a serendipitous pairing of an artist’s corpus and an exhibition space—even though Banerjee’s sculptural installations, brimming with sundry “exotic” materials, were in fact made to be site-specific elsewhere. The show gathers over two dozen such pieces, including those she created for the 2000 Whitney Biennial in New York and the 2017 Prospect New Orleans, alongside works on paper and two early videos.

The exhibition is distributed throughout PAFA’s historic American wing, a neo-gothic structure, where Banerjee’s installations disrupt—in welcome ways—the surrounding artworks and architecture. It is jarring, for example, to look through an archway bracketed by two monumental portraits of George Washington and see The promise of self rule . . . (2008), a work in which a parasol with only a quarter of its paper remaining is attached to a Victorian-era chair from which hangs a length of mesh netting festooned with feather fans and one curled cow horn. The seat of the chair is ringed with pink lanterns, and a trickle of glass beads sways beneath the feathers, conjuring the grandeur of chandeliers. Across the hall, near a nineteenth-century painting of American colonists encountering Native Americans, sits Her captivity was once someone’s treasure . . . (2011)—a sculpture that features a large birdcage serving as the scaffold for cornucopian clusters of shells and gourds.

Banerjee’s installations do not unify or sublimate their individual components. In the exhibition’s title work, from 2014, small objects overrun their lattice support yet remain legible and heterogeneous, each sea sponge, grapevine, and dangling tuber distinct. This strategy is echoed in the drawings (depictions of colorful fantasy figures) and videos (near-abstractions showing, for instance, kaleidoscopic street scenes in Chennai, India), although these works, exhibited on the periphery of the space, are overpowered by the spectacularly imposing installations. Banerjee has taken the logic of the historical cabinet of curiosity—with its conceit of imposing order on widely disparate natural and man-made specimens—and flipped it over, almost literally. The full titles of her works, which run fifty to 180 words but obey no unifying syntax, suggest a poetics of excess and irregularity. Consider the title of a massive 2013 installation in which the skeleton of a hot-air balloon fashioned out of wire and horns sways suspended over a topography of pebbles, coins, shells, sand, and more: A World Lost: after the original island appears, a single land mass is fractured, after population migrated, after pollution revealed itself and as cultural locations once separated did merged, after the splitting of Adam and Eve, shiva and shakti of race black and white, of culture East and West, after animals diminished, after the seas’ corals did exterminate, after this and at last imagine water evaporated . . . this after Columbus found it we lost it, imagine this.

Using titles such as these, and materials that include Indian textiles, Chinese altar lamps, Texas Longhorn skulls, and sculptures made by Kenyans for tourists, Banerjee—who was born in Kolkata, raised in London, and now resides in New York—has spurred critical conversation about what a visual language for today’s postcolonial diaspora might look like. Viewing her work, however, can awaken a dangerous impulse to mentally repatriate the individual constituents, to assign them fixed origins and read them as material emissaries from faraway places. It is relevant to note here that Banerjee sources her materials largely on the internet rather than traveling to procure them. In an interview in the catalogue, she states, “People who think they’re from a culture, and feel stabilized by its security are not noticing how their own culture is constantly adapting to other cultures.” She wants her hybrid configurations of culturally diverse objects to shake loose attachments to notions of cultural purity.