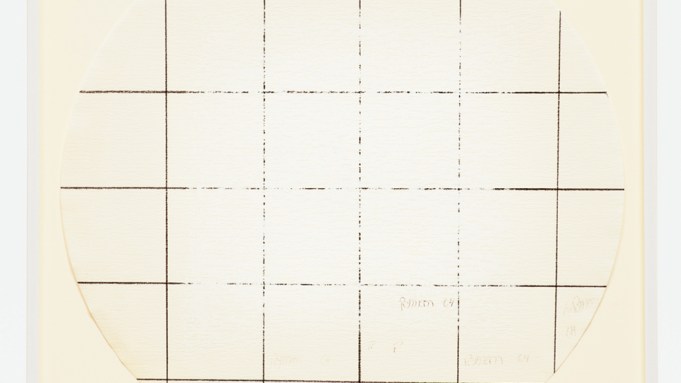 Robert Ryman’s exhibitions are always compelling, frequently impressive, but rarely surprising. The octogenarian artist has created a consistent body of work, which, although diverse and inventive, usually remains within a relatively narrow set of parameters. He has devoted his career to exploring the fundamentals of painting—the basic relationships between paint, surface, and support—within the realm of predominantly white, square abstract compositions. But Pace’s recent exhibition of Ryman’s drawings did hold some surprises, exposing new facets of what previously seemed a thoroughly familiar oeuvre.

Most of the works on view were from the 1960s, though a few dated to subsequent decades. A series of four small square pieces titled “Stretched Drawings” (ca. 1963) opened the show. For each, Ryman drew a grid in charcoal or pencil on a square of stretched canvas, after which he removed the canvas and re-stretched it onto a smaller frame, restoring the grid and causing it to extend over the sides of the piece. The “Stretched Drawings” appear as classic Ryman, their reductive forms emphasizing the multiple relationships that define them: the character of the line vs. the texture of the fabric, the pattern of the grid vs. the shape of the stretcher, the dimensions of the work vs. those of the gallery. Although Ryman believes that painting should focus on the materiality of paint and drawing on the operations of line, he has often used similar gestures in his works in the two mediums, with his drawings tending to support and reinforce the discoveries he has made in his paintings. On a few occasions, however, Ryman’s drawings have veered off on their own, suggesting potential directions he chose not to pursue in his practice.

Among such unusual works in the exhibition were thirteen drawings (some ca. 1964 and some ca. 1966) that Ryman made on Chemex coffee filters and that had never been shown publicly before. Each displays a grid, square, or series of vertical lines inscribed in graphite, pastel, or charcoal within the circular filter. Although Ryman has employed many materials in his work over the decades, including wax paper, cardboard, anodized aluminum, and plaster, the coffee filters seem different in that they maintain their identity as a common household item even while fulfilling a formal function.

Another of the show’s surprises was The Watermark Series (ca. 1968), a suite of five drawings last exhibited in Ryman’s 1972 midcareer retrospective at the Guggenheim Museum in New York. Here, Ryman used sheets of gray-blue paper with a large, central watermark of Raphael’s Madonna della Seggiola as his support. He drew squares (usually one, though in one there are two) so that they contained, cut across, or inhabited Raphael’s tondo. The suite is unique in Ryman’s body of work for its inclusion of a representational image—an art historical masterpiece, no less.

In a 1993 interview with Robert Storr, Ryman famously described himself as a “realist.” He regards both representational and abstract painting as essentially illusionistic, in that they conjure up distinct worlds within the frame, while “realist” painting, as he defines it, focuses viewers’ attention on the physical reality of the artwork’s materials and surroundings. Certainly, the coffee filters and watermarks expand his works by conjuring things that are not immediately present or even tangible—from coffee and Raphael’s painting themselves to domestic life and art history in general. The inclusion risks breaking the bubble of concentrated meditation—the focus on the here and now—that Ryman’s work tends to require. That such pieces remain isolated incidents in his work suggests that they mark the outer limits of his project, pointing to conditions of reference and representation that it cannot adequately address. They also emphasize that his exploration has been not only artistic but philosophical and even scientific in character, proceeding as it has by trial and error as a means of accumulating knowledge with regard to a rigorously defined problem.